Family Has Been Living Without Money For Two Years, By Choice

A family of three in Berlin lives without money, not because they are victims of the economy, but because they want to raise awareness of “excess-consumption society.”. 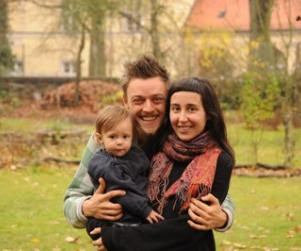 
“As consumers, we support the system, and we are all responsible for making a wasteful society,” Raphael Fellmer, 29, told Yahoo! Shine. “This strike is to inspire other people to reflect about our other possibilities.”

Fellmer, who said he’d held jobs since he was 12 years old, began his protest after years of working in hotels, bars, restaurants and various offices. In 2010, after graduating from college in the Hague as a European Studies major, he and two friends embarked upon a 15-month “journey of humanity” to raise awareness of environmental destruction and of society’s many wastes, including estimates that about one-third of all food produced worldwide (valued at about $1 trillion a year) gets wasted.

That trip involved hitchhiking from Europe to Mexico without cash, simply depending on the goodwill and excess resources of others. It carried them over more than 19,000 miles on more than 500 vehicles—including a sailboat that took the trio from the Canary Islands to Brazil in exchange for crew duties—and soon led Fellmer to meet his wife, Nieves Palmer, who became pregnant along the way.

Now the couple, along with their 18-month-old daughter Alma Lucia, are continuing to live nearly money-free in Berlin, where they do odd jobs and organizing work in exchange for living space, with roommates, in the Peace House Martin Niemöller, which contains various non-profits. (Though Fellmer uses no money, he said Palmer does use a little, mainly in the form of child support she receives from the government, which is granted to all children.)

Fellmer has become a full-time activist in the name of bringing attention to problem of waste and overconsumption, running organizations and websites including The (R)evolution: In Harmony with the Earth. There is a network of others, too, beyond the two pals he traveled with. A 2010 documentary called “Living Without Money,” for example, profiles a 68-year-old German woman named Heidemarie Schwermer who gave up money 14 years ago. She says she’s never felt freer.

But Fellmer admits his lifestyle is radical, explaining that it’s to get his message across. “Not everybody needs to do this to such an extreme. This is for protest. We want to inspire people to think about changes they can make. There are so many tools out there, so many ways to reduce one's carbon footprint.”

One is through the fast-growing German movement of “foodsharing,” in which adherents use the Internet to share edible food that’s been foraged from grocery-store dumpsters. Fellmer founded an organization in which he partnered with a leading German organic-food chain to create an efficient way of “rescuing” food for distribution just before it is thrown away. He's also part of a website, foodsharing.de, which has registered more than 12,000 people across the country in just two months of its existence, he said, and has drawn interest from around the world in more than 20 languages (6 of which Fellmer speaks). In the U.S., where about 40 percent of food—or about $165 billion worth—gets wasted annually, there exists a similar fringe movement of vegan dumpster divers called “freegans.”

Other ways to take part in what Fellmer calls “collaborative consumption” include using popular couchsurfing sites, or finding people with empty homes who need long-term house-sitters. “We have not only a surplus of food but of housing,” he said. “Everything we need is already there. We just need to make the connections.”

Even as a new parent, Fellmer said he’s been able to stave off money-related anxieties. “Children need from parents love, attention, time. All these materialistic things are really ridiculous,” he said, adding that used baby clothes are as easily had as thrown-away food. Germany offers universal medical care, although Fellmer and his family have managed to find a dentist to give them free services, and did gardening and repair work for a gynecologist when Palmer was pregnant. (They did spend their one bit of money on the overseas journey, however, when Palmer, a former psychologist, used funds she had saved in order to pay a midwife.)

Though Fellmer’s parents are supportive of his lifestyle and “pretty open,” he admitted to having plenty of critics. “People are very creative with their negative comments. They say I’m lazy, abusing other people,” he said. “But when they talk to me, they learn I’m working 40 to 50 hours a week on projects for the good of society.”

Mostly, Fellmer hopes his money strike can help change others’ lives. “Money is hampering our dreams. Most people have forgotten it, or are completely afraid of living without money, so they are enslaved by the monetary system,” he said. “I hope to motivate people to believe a little more in their dreams.”

German Grandmother Lives Money-free and Has Never Been Happier

$aving Bucks through the centuries-old practice of bartering 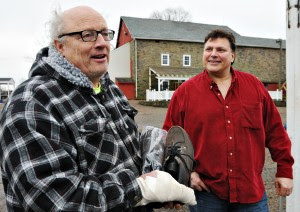 
Why buy when you can trade? That’s the philosophy embraced by a New Hope man who makes use of the centuries-old practice of bartering.

His marketplace? Craigslist — a sometimes dangerous but lucrative avenue for trading.

Craig Forchetti, who’s in the construction business, comes across dozens of items he knows are valuable to others, but not necessarily practical for him. So he does what a growing number of barterers do: posts them online.

He started a few years ago, when he advertised a $50 nail gun. A man offered him a $300 grass edger.

“We switched and I thought, ‘Wow, I’m ahead of the game.’ That’s what’s great. Everyone walks away feeling good.”

Forchetti, who trades two or three times a week, admits there have been times when he needed something that wasn’t as valuable as the item he wanted to trade. “But it’s not about the price; it’s about how much someone needs something, and the value then becomes about the enjoyment of that item,” he said.

Not all deals end with a happy handshake, though. For example, when he tried to swap a mountain bike for a three-wheeled bike, one offer came in — for a toaster.

“You get crackpots like that, too — people who think they can get something for very little,” he said.

Another guy wanted Forchetti’s bayonet and offered a Rolex watch. “When we met, I saw the watch was a piece of junk and the deal flopped. We parted friendly. But you have to meet the person and see the item to know whether it’s a good deal or not,” he said.

Forchetti prides himself on a recent trade of landscape lights given to him by a customer. “I had them for a year, stepping over them and I was thinking of throwing them away,” he said.

Instead, he posted them online in search of a massage chair. When the call came, he was elated.

“I got a $2,000 massage chair,” said Forchetti, who looked up the chair’s model number to assess its value before the swap.
“I had those landscape lights that were worthless to me. And the man is thrilled and happy for the lights that I don’t really need. It was a win-win situation, and I’m giving ... something that has no real value to me.”

Making trades through Craigslist doesn’t come without risks, though. That’s why he barters instead of selling for cash. A few years ago, he was sprayed with Mace trying to sell a ring for cash. He hasn’t sold for cash since then.
“Bartering is much safer,” he said.

Now, Forchetti does background checks on the people he trades with and refuses to meet anyone in a secluded location. He’ll even check phone numbers to make sure they’re registered to real people rather than prepaid throwaway phones.

His success stories certainly outnumber any misadventures. Through bartering, he has secured a drum set, an elliptical exercise machine, a full gym set, a video recorder and more items than he can recall in one hour.

Forchetti’s bottom line: “Everything I got is good stuff, and I never had to pay a dime for it.”
Posted by seemorerocks at 10:53