US supplies tear-gas to Egypt

Stripped of 'Country of Origin' Label, US Agrees to Sell Tear Gas to Egypt
Canisters shipped without company's name, country of origin 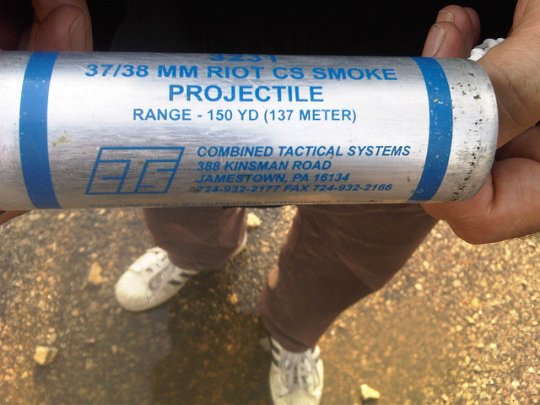 Egypt's Interior Ministry ordered 140,000 teargas canisters from the United States in January, which the US State Department only allowed to be exported without the company's name or any indication they were made in the U.S., the Egypt Independent reports Friday.

From letters between the Interior Ministry and Defense Ministry: "In light of the ongoing incidents and growing need for gas bombs to deal with rioters and preserve the nations safety, Al-Guindy Company for Imports and Exports, a representative of the US Combined System Company in Egypt, has been contracted to import 70,000 gas bombs and 70,000 long-range gas projectiles from the US to Egypt,” the letter stated.

From a memo written on January 28, 2013 by Major General Magdy al-Gohary, head of the Egyptian Department for Police Supply:

“The US government was stringent in issuing export permits for Egypt items that have been contracted since July, due to the unstable situation in Egypt and what was circulated by the media and rights groups about the US company’s effect on protesters while using [the gas canisters] against rioters in Egypt.”

“The permit from the US government was obtained after removing the company’s name and country of origin written on the items. While writing the memorandum on 28 January 2013, procedures were taken to ship the items via sea. They are expected to reach the Egyptian ports during the first half of April.”

On Thursday, US State Department spokesperson Victoria Nuland told the press, "Whether we’re talking about Egypt or any other country on the planet, frankly, we support the right of peaceful protest as one means for citizens to express themselves to their government. But protest has to be peaceful and the response to protest also has to be restrained and peaceful on the part of the government."