Tropical Cyclone Rusty could have a 100-kilometre wide eye and boast winds of more than 200kmh by the time its full force is felt in West Australia late on Wednesday.

Overnight, Rusty was sitting near stationary off the Pilbara coast in the north west.

With Port Hedland residents on red alert (meaning they should not leave shelter until notified) since Tuesday morning, the Department of Fire and Emergency Service's John Franklin said the danger posed by the cyclone was very real.

"It [Rusty] is 90 to 100 kilometres in width in its eye so it's quite a significant cyclone," Franklin said.

"We're very mindful that once it arrives people should be prepared for the very worst."

The Bureau of Meteorology's 8pm advice (1am Wednesday NZ time) predicted Rusty, still listed as a category three system, would continue its progress southward towards the Pilbara coast on Wednesday.

Port Hedland has already experience 120kmh wind gusts but those gusts are expected to increase to more than 165kmh in coastal parts between Whim Creek and Pardoo during Wednesday.

"It feels as if most of the locals think tomorrow night will be one of the scariest things they've ever lived through," Channel Seven reporter Grant Taylor told Radio 6PR on Tuesday afternoon.

"It looks like it's going to be a direct hit of a category four cyclone right on top of Port Hedland sometime (Wednesday) night."

On Monday, Rudler told 6PR that you couldn't buy bottled water in Port Hedland for "any money" and that some long-time residents were leaving town because they "had a funny feeling" about cyclone Rusty.

While Port Hedland and South Hedland residents had been urged to leave their homes immediately, the shire's deputy mayor, George Daccache, was spending Tuesday in his security screen-clad home.

A Port Hedland resident of 40 years, Daccache has seen his fair share of wet season wild weather, but expected this cyclone will be one of the worst the town had ever seen.

"This one's a bit of a beauty," Daccache said.

With residents heeding warnings to stay safe, the streets were empty on Tuesday, as were supermarket shelves after a rush to prepare for Rusty's arrival.

"It's going to be a pain waiting for two to three days for this to come and go," Daccache said.

"We've just to hang in there hour by hour, and batten down the hatches."

Daccache said he was most concerned about an expected storm tide, which threatened to inundate the lower-lying western part of the town.

Many homes had lost power, but most residents were staying at emergency shelters at the Andrew McLaughlin Community Centre and the Wanangkura Recreation Centre, he said.

More than 300 people had reportedly taken up refuge in the emergency shelters by Tuesday night.

Heavy rain is likely to lead to major flooding in the De Grey catchment, while significant flooding is expected in the Fortescue catchment and in Pilbara coastal streams.

Port Hedland's airport was shut at 9pm on Monday and all commercial flights cancelled. The port is also in shutdown, possibly for the rest of the week.

Eleven schools have been closed.

The Kimberley town of Broome has been given the all-clear, but a flood warning has been issued for the Dampier Peninsular, including Cape Leveque.

More than 830 millimetres of rain was dumped on the Cocos Islands in the three days to Monday - eclipsing the amount that fell in metropolitan Perth in 2012 by more than 200 millimetres.

"We are seeing totals already up around the 100 to 150 millimetres per day up the coast. I think that's going to pale into insignificance compared to what we'll see over the next couple days."

Cyclone Rusty has all but brought the Pilbara's mining and resources industry to a halt.

Mining giant Rio Tinto prepared for the storm by closing the Port Walcott port at Cape Lambert and was finishing up ship-loading at its Dampier ports.

Virgin cancelled flights from Perth to Broome on Monday and Port Hedland and Dampier ports were closed and all vessels sent out to sea on Monday in preparation for Rusty's arrival. 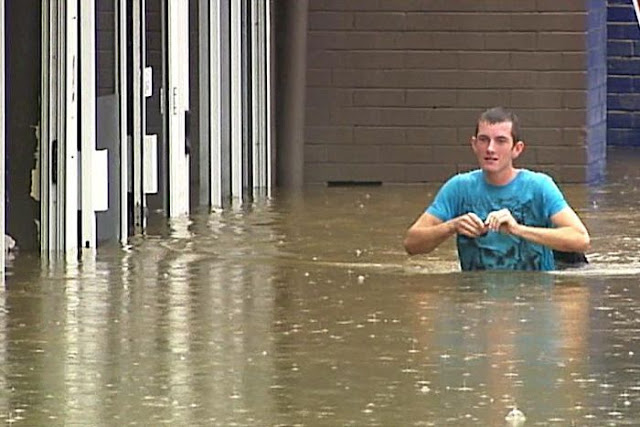 More than 30 businesses have been flooded in Gympie in Queensland's south-east overnight after the Mary River reached a flood peak of 18.4 metres just after midnight (AEST).

The torrential rain which has fallen in the state's south-east over the last few days has seen Gympie's central business district flood for the fourth time in the last year.

He says Gympie remains split in half by floodwaters and the Bruce Highway is expected to remain closed south of the city until at least this afternoon.....