Horse meat: Dark dealings of Europe's cruellest trade
Horses sold for meat at a night-time fair in Poland are being transported across Europe in a trade that has suspected links to organised crime. 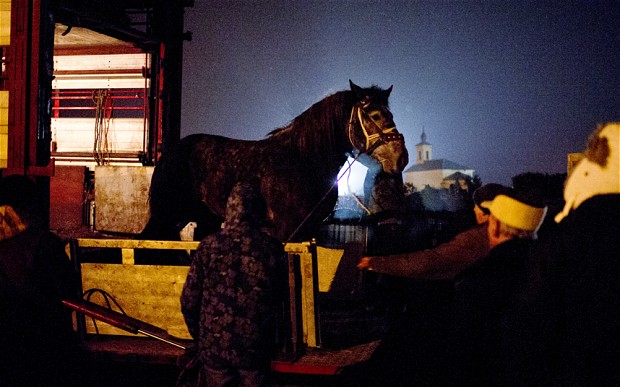 It is minus 6C and the tea is laced with vodka. Handfuls of notes are being carefully counted and Piotr is leaving with 7,000 zloty – about £1,400 – for his old mare.

He is not alone. Everywhere on the frozen, snow-covered field, groups of men are looking at horses and haggling over their price.

Welcome to Skaryszew: the place where horses arrive from Polish farms and leave in lorries for fattening and slaughter.

Men have been selling horses here on the first Monday of Lent since 1432.

But now those horses could even end up in the British food chain, because Skaryszew, 75 miles from Warsaw, is the start of a long, and sometimes obscure chain that has been blamed for horse meat being found masquerading as beef in British shops and wholesalers.

(David Rose for the Telegraph)

From Skaryszew, the horses will travel as far afield as Italy to be slaughtered. Who profits from the trade, and what checks to ensure the horses are safe to eat are, at best, questionable.

For Piotr, however, it has been a good trip. The farmer has travelled two hours from his village, Cisów, to sell his mare, expecting to get 5,000 zloty for the animal – a large amount in a country where the average agricultural worker’s annual wage is just under £1,200 a year.

His entrance to the fair at 1am is hampered by a group of Polish animal rights protesters who jump in front of his truck, demanding that their vets examine his horses before he can continue.

Security staff also check that he has the correct paperwork, including passports, for both horses he is transporting.

“She can’t get pregnant so I want to get rid of her,” he says. He has other horses, he adds, enough that the mare does not have a name.

Speaking from the cab of his truck, which is littered with beer cans, he says that the other horse belongs to a friend who will be arriving later.

Although his documents are checked animal welfare campaigners, who are here to investigate the trade, say that the passport system – which exists to follow European law and is therefore almost the same as the one in Britain – is open to abuse.

The passports say whether the horses are fit for human consumption and are issued by the Polish Horse Breeders Association at 18 regional offices, but there are concerns that the documents can be forged, or the details on genuine ones falsified by unscrupulous vets – concerns that have already been raised about the British scheme.

There are no government inspectors at Skaryszew, so when security staff check passports, it is no guarantee of their authenticity.

Piotr parks in a row of trucks, all with horses tethered to the back. This is where the deals are struck.

A black stallion rears up, to the excitement of the crowd and its boisterous – and drunk – owner, Zbyszek.

“It’s the best horse in the village,” he proclaims, pulling on its harness to bring it under control, but he does not care if it gets sold for meat or breeding. “I just want to get rid of it, I have too many horses,” he says.

Close by are six or seven men in leather jackets and black flat caps. This is how buyers and sellers meet, smoking cigarettes and drinking their vodka-laced tea.
One shines his torch on a horse, tethered to a truck, before slapping the hand of the seller to confirm the deal. All along the road, similar exchanges are taking place under the glare of lamps powered by noisy generators.

The meat trade is carried out at night and the sellers either know, or do not care, that their animals are going for slaughter. During the day, most horses are bought for farms or as pets. However, for now, in the darkness, the trade is in meat.

Further along the road a Lithuanian-registered lorry has parked. It has two trailers and, by the end of the night, they will be filled with 21 horses.

A ssick horse, after a long journey, it's to weak to stand and will require vetenary treatment (David Rose for the Telegraph)

A group of men, some carrying thick wooden sticks, which are apparently rarely used, are gathered around it. Throughout the night they bring horses to the lorry and gradually it starts to fill up.

By 3am, it comes good for Piotr, when he sells his mare to the Lithuanian contingent for 2,000 zloty, about £400 more than he hoped, and he runs back to his truck, empty headcollar in hand, to fetch her passport.

“I’m happy, it’s more than I expected,” he says breathlessly, before running back to the Lithuanian lorry to collect his money.

The owner of the truck, who would give his name only as Algis, said that he would be taking the horses to Lithuania, almost 400 miles away.

“These horses will not be eaten because Lithuania is short of horses for work and for leisure,” he said.

However World Horse Welfare, a British charity which campaigns for greater regulation of the transportation of horses, and whose campaigns officers are at the fair, says that the truth is very different.

This lorry load, and others from the fair’s late night deals, are heading for slaughter. The reticence to admit it is because the animal rights activists, as well as international campaigners, have stepped up their interest in the trade.

Poland is the biggest exporter of horses in the EU, accounting for 45 per cent of the 65,000 transported every year.

The sheer number reflects the country’s size and the abundance of horses on its farms, where modern methods are slowly arriving.

There are hundreds of fairs every month and most horses will end up in the Bari region of Italy, where horse meat is popular, unlike in Poland where, like Britain, it is barely eaten – at least knowingly.

Perhaps not surprisingly, the charity is most worried about the welfare of the animals, which it points out can lead to disease and leave meat unfit for human consumption, a concern which is likely to be heightened by the lack of inspectors checking the horses before they are driven from Skaryszew.

Hannah Westen, a campaigns officer for the charity who watched the sale, said: “Long-distance transportation across Europe for slaughter causes massive stress to the horses involved and leads to serious welfare problems such as exhaustion, dehydration, injury and disease.

“This suffering is utterly needless, horses could be slaughtered close to their point of origin and the meat transported instead.”

However, a more sinister set of suspicions hang over the whole horse trade in Poland: that it is a front for crime.

Piotr, like most of those who sold animals at last week’s fair, was paid almost £3.40 a kg for his horse, yet the most expensive horse meat, from foals, fetches only £2.40 a kg in Italy, where the animals will mostly be slaughtered.

On top of the payment to Piotr and the other sellers is the cost of a journey covering about 1,500 miles. The route the horses take goes through Poland, then into the Czech Republic, Slovakia, Hungary and Slovenia before entering Italy.

At a cost of at least an extra 250 miles it avoids the direct route through Austria, where checks on welfare and, perhaps more importantly, paperwork are more rigorous, according to World Horse Welfare.

Additionally, some horses will be kept for as long as six months at stops along the way to be fattened up.

The charity, and the Polish authorities, suspect the answer is simple: that the horses are being used in a form of money laundering.

The suspicion is that the movement of horses creates a convenient paper trail for gangs to “clean up” dirty money.

By exaggerating the value and number of horses moved, they can explain the existence of large amounts of cash gained from less legitimate enterprises.
Paying farmers like Piotr slightly over the odds for their animals is, then, a small price compared with the potential profits.

There are darker suggestions too, that the lorries can sometimes be used to smuggle drugs or guns, relying on the presence of horses to create the impression of legitimacy.

If true, it would confirm the fears voiced by Owen Paterson, the Environment Secretary, that criminality is in part the cause of the horse contamination scandal.
And also, it would be little surprise that the horses might enter the food chain as beef – as they have been proved to in Poland and France – because their disposal is simply the final element in the chain.

Most of those who sold animals at last week’s fair were paid almost £3.40 a kg for their horses (Reuters)

Their transporters will be little concerned with where exactly they end up, as long as they have made it to a slaughter house.

The first stop for the Lithuanian lorry with Piotr’s horse is at the Pol-Madi assembly centre in Chronowek, 20 miles away, where the transport firm checks on the horses and draws up paperwork for the lorry-load.

From there the long road to Bari begins, with the final stop before Italy usually at Rédics in Hungary, on its border with Slovenia, where there is a feeding station.
The caretaker is paid in cash, about £50, for food and drink for animals on a small truck, to £190 for 24 hours’ rest. Sometimes there is an extra charge of £86 to remove a dead animal.

The stop is owned by a Hungarian businessman who lives in Liechtenstein, through a company formally closed in October by the Hungarian courts for financial irregularities.

When asked if the lorry drivers carried anything other than livestock, the caretaker said: “This is something that is really hidden from my eyes. Now that the borders are open it is very much possible.

“I am sure there are people who are in the business for a reason, but I am not one of those.”

Whatever the truth of the finances behind the horse trade, Piotr’s mare is firmly on its way to Italy – a country which yesterday announced it too had found beef products contaminated with horse.

The discovery is likely to prompt Italian authorities to take an interest in the opaque trade which brings horses to their country, and quite possibly into Europe’s food chain in the form of fake beef.

Posted by seemorerocks at 09:43