It looks very much like political stalemate in the Italian elections, which will not bode well for the country's economy. Plus, we have the scandals in the Vatican and an eruption of Mt Etna.

We will have to keep a close eye on Italy

The Italian general election has turned into a neck-and-neck race between right and left after the earliest projections contradicted exit polls showing the centre-left heading for victory.

The first estimates based on the actual count showed Silvio Berlusconi's centre-right alliance ahead of Pier Luigi Bersani's centre-left by 31% to 29.5% in the upper house or Senate. The unexpected turnaround sent the interest rate on Italy's debt soaring as traders took fright at the prospect of a divided parliament with different majorities in the upper and lower houses.

One of the projections made Beppe Grillo's Five Star Movement (M5S) Italy's leading party. However, because it is running alone and not in a coalition, it lagged the two big alliances.

Earlier, exit polls had indicated that the centre-left, led by Bersani's Democratic party (PD), was comfortably ahead by around six percentage points. They also showed an apparent slump in support for the centrist bloc of Mario Monti, the outgoing technocratic premier, that was borne out in the subsequent projections.

An exit poll for Rai, the state broadcaster, had put the centre-left bloc of the PD and its allies on 35-37% of the vote in the lower house of parliament and 36-38% in the Senate.

The centre-right bloc led by Berlusconi's Freedom People party was in second position, with 29-31% and 30-32% in the Senate. The same poll put the M5S in third, and Monti's centrist grouping significantly behind in fourth. The results were roughly echoed by a separate exit poll for Sky television.

Observers cautioned against setting too much store by the exit polls, which have proved unreliable in the past.

The fate of the Senate is less clear. The result will rest on key regions such as Lombardy, where the centre-right – in alliance with the Northern League – could win and deprive the centre-left of seats it would need for a majority. Sky's exit poll said the Lombardy result was tied.

Another crucial factor will be whether Monti's centrist bloc manages to gain enough Senate seats to be of use to the PD as a potential governing ally.

Turnout, according to exit polls, was significantly down on the last election in 2008. The parliamentary elections will mark the end of Monti's technocratic government, brought in at the end of 2011.

The fractured nature of the political landscape and complexities of the electoral system have raised fears that recession-mired Italy, which has had a decade of near-economic stagnation and more than a year of punishing austerity, could end up with a deadlock in which no strong government is possible

From Hung Parliament To BTP Sell Off: JPM Says To Expect A 40-100 Bps Rise In Italian Bond Yields 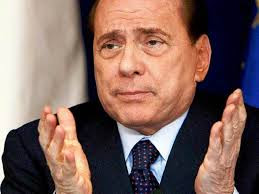 Today's stunning comeback by Berlusconi, which is really a slide in support for Bersani and Monti whose joint coalition government is unlikely to have the 158 seats needed in the Senate to avoid elections in a few months, means the "Plan B" aka "worst" outcome is in play. How "worst"? In a note released over the weekend, JPM strategist Gianluca Salford attributed a tiny 15-20% probability to an outcome that now appears to be the base case. A far more likely result (defined by JPM as 75%) would have been a continuation of the status quo, which saw an easily-formed Center Left government. As of this moment, that no longer appears feasible. So as the next steps play out, the fulcrum security will be Italian BTPs, which according to JPM will be whacked to the tune of 40 to 100 bps (at least to start), and with deleveraging feedback loops picking up after, who knows where this will end, especially in a worst-er case scenario where there will be months of political and social uncertainty in Italy.

In our baseline scenario (75% probability), a centre-left plus centre government with a solid majority in both houses is likely to push 10Y BTPs to the 4.00% area (Exhibit 1), in the following days. In the baseline scenario, the most important variables to watch are the strength of the combined majority and the balance of power between centre-left and centre. We believe that the strength of the majority will be a market positive, whereas, based on our estimates, Monti’s limited political appeal is unlikely to boost market sentiment.

In the case of an outright centre-left majority in both Houses with the explicit refusal to enlarge the coalition to Monti’s centre (5% probability), we expect little change compared to current levels. The failure by the centre-left (even with the support of the centre) to reach a majority of seats in the Senate (5% probability) would force tortuous negotiations to extend the majority to other parties and would not be welcome by financial markets, pushing yields, at least initially, up around 40bp.

The most negative outcome (15% probability) would be a centre-right victory in the Chamber due to the political uncertainty related to the need to forge a majority in the Senate. We expect discussions between the centre-right and centre to be complex and, in addition, we see a high risk that the coalition would have to be extended to the centre-left. The initial reaction might be in the order of up to 100bp, although we expect pressure from the President of the Republic and from financial markets to eventually lead to the creation of another Grand Coalition. We expect 10Y Bunds to move with a beta of roughly -0.25 to changes in BTP yields. Weighting the scenario, the direction is for a modest decline in BTP yields and a touch higher Bund yields, but we reiterate that we do not see much value in prepositioning.

In retrospect, perhaps one should have "prepositioned."

Posted by seemorerocks at 07:47