Hundreds of small earthquakes have shaken the earth around the Sabancaya volcano in southern Peru over just a few days and the rumbling, along with plumes of smoke spewing up to 320 feet high, have put officials on alert to evacuate the area. 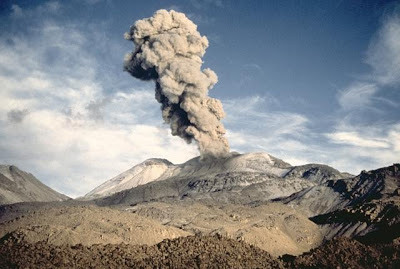 Peru's geological agency Ingemmet recorded some 536 quakes, about 20 an hour, on February 22 and 23 and periodic movement is ongoing.

Thousands of people live in the valleys surrounding the volcano. Some have already started to leave the region because the unusual seismic activity has damaged their homes. About 80 homes were damaged by one temblor on February 22, Peru's national defense office said.

The 20,000-foot (6,000-meter) volcano Sabancaya, which means "tongue of fire" in Quechua, has not had a significant eruption in nearly a decade. It sits atop the South America tectonic plate, which forces magma to the surface when it clashes with the neighboring Nazca plate.

Ingemmet said the volcano has been releasing huge smoke trails intermittently since January 15 and current seismic activity is similar to that which accompanied an eruption in 1986.

Sabancaya, active historically, was dormant for 200 years before erupting into activity several times in the 1980s and 1990s. No casualties were reported at that and the volcano has only experienced small eruptions since.

Southern Peru is the home to more than a dozen volcanoes.

Sabancaya is about 62 miles from the city of Arequipa, one of Peru's three largest cities, which was recently hit by heavy rains and flooding.

About 1.2 million people live in that city.

Unreported: Too many moderate relatively shallow earthquakes along the costs of New-Zealand

The last couple of weeks we saw numerous moderate earthquake (around Magnitude 5) at relatively shallow depths (5 to 50 km) below land or along the coasts of the North Island and South Island.

Today Geonet reported already 3 – 1 near Christchurch, 1 at Ruatoria and 1 in the Hokitika Greymouth area. Earlier similar earthquakes were reported near Mount Egmont and near Blenheim.

Nothing really serious but all of them enough to scare people.