Winter storm hits in US 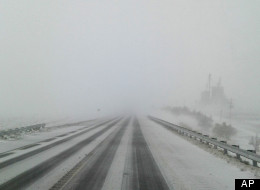 The latest winter storm, dubbed "Rocky" by the Weather Channel, has delivered a knockout blow to parts of Texas, Kansas and Oklahoma, and is forecast to strike Chicago by Tuesday.

Winter storm "Rocky" has pummeled the Central Plains, dumping a record 17 inches of snow in north Texas, according to the National Weather Service. AccuWeather predicts that, by Tuesday, the storm will deliver another 12 to 24 inches of snow in a band stretching from Wichita, Kan., to Kansas City, Mo.

Although Chicago lies directly in the path of winter storm "Rocky," a northeasterly jab striking from New Mexico up through Michigan, it is forecast to decrease in intensity by the time it reaches the Windy City, bringing only 3 to 6 inches of snow.

Blizzard warnings remained in effect Monday in New Mexico, Texas, Oklahoma and Kansas. According to the Weather Channel, whiteout conditions and tropical-storm force winds have been reported in north Texas, with similar outlooks for other states in the path of greatest impact.

In Texas, the "crippling, historic blizzard" left some motorists stranded in their cars on highway, according to CNN. National guard units were dispatched to rescue stranded travelers in Amarillo, Tex.

But for all the frustrations that "Rocky" may bring, there is a potential upside. According to Reuters, the precipitation from the storm will help alleviate what has been the worst drought to hit the plains in 50 years. However, some experts feared that the drought stress on the winter wheat crop may have already harmed it beyond repair.


For more videos and interactive GO HERE
Posted by seemorerocks at 19:21