On the Supersonic Track to Extinction 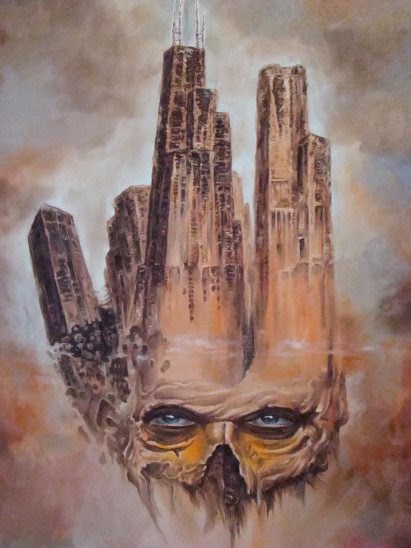 Where is the “Misanthropocene” right now in relation to past extinction events? The chart below tells the tale. Notice that our current rise in GHG’s is essentially instantaneous in relation to past warmings which took place over thousands of years. As far as scientists can tell, the current warming from industrial civilization is the most rapid in geologic time. Ice core and marine sediment data in the paleoclimatology archive have revealed brief periods of rapid warming and there is no reason to believe modern man is immune to such catastrophic and abrupt climate events. In fact, we know that the Arctic is already warming twice as fast as anywhere else on the planet. Earth sensitivity to climate change is now thought to be possibly double that of previous estimates. An entirely different planet can result from just a slight change in temperature:

We’re about halfway towards the same CO2 levels as the Paleocene Thermal Extinction, but our speed of trajectory surpasses even that of the Permian Extinction:

In 2005, Lee R. Kump and fellow scientists published a paper describing what would become known as the Kump hypothesis, implicating hydrogen sulfide (H2S) as the primary culprit in past mass extinctions. According to OSHA, “a level of H2S gas at or above 100 ppm is immediately dangerous to life and health.” Prior to Kump’s study, the working theory had been that some sort of singular, cataclysmic event such as an asteroid strike was to blame for all mass die-offs, but Kump and colleagues proposed that a global warming-induced asphyxiation via hydrogen sulfide gas(H2S) was to blame for snuffing out life under the sea, on the land, and in the air. In past mass extinctions,volcanic eruptions and thawing methane hydrates created greenhouse-gas warmings that culminated in the release of poisonous gas from oxygen-depleted oceans. Humans with their fossil fuel-eating machines are unwittingly producing the same conditions today. The Kump hypothesis (elevated CO2 with lowering O2 levels) is now regarded as the most plausible explanation for the majority of mass extinctions in earth’s history:

Excerpt from Lights Out: How It All Ends

In the short term as both poles completely melt away and the Equator-to-Pole temperature gradient declines, the hydrologic cycle and storms will intensify, jet streams will be altered, global air circulation and ocean currents will be rearranged (especially in northern latitudes), and sea levels will rise. While some local winds will slow down, other areas may actually increase due to local temperature gradients becoming more influential than global ones. New research has indicated early warning signs of a collapse in ocean circulation. When that happens, the oceans ultimately turn into stagnant, anoxic pools belching deadly hydrogen sulfide into the atmosphere.

As others have noted, our energy, transport and building infrastructure was not constructed to withstand a mutated planet blindly molded by over seven billion humans. For example, think of all those massive wind farms rendered useless by alterations in local wind patterns, hydro-power shut down due to devastating droughts, solar farms destroyed by large hail storms, etc.
Many are under the delusion that we’ll be able to turn this process around with “green energy” while ignoring that such technologies are derivatives of fossil fuel or that increased efficiencies will lower our carbon footprint while ignoring Jevons paradox. Countless other self-reinforcing feedbacks loops driving our socioeconomic system come into play as well such as rampant overpopulation (Overpopulation key driver of climate change, mass extinction), chemical pollution (“Every year, up to 400 million tonnes are produced and a thousand new substances concocted“), and capitalism’s inherent growth dynamics:

The monstrous capitalism we see today is the result of capitalism’s inherent growth dynamics. To give one modern-day example, the solar energy industry/movement began with the conception of local, i.e. decentralized, and roof-top solar electricity generation for local consumption. Today we see projects like Desertec (huge solar power plants in the Sahara that would supply 15% of Europe’s total electricity needs) and competition between European and Chinese solar panel producers for larger chunks of the world market. – Link

The destructive trend has been inexorably cumulative:
…the central trend is verifiable: mass die-offs are on the rise, increasing by one event per year for the last 70 years.

“While this might not seem like much, one additional mass mortality event per year over 70 years translates into a considerable increase in the number of these events being reported each year,” explained co-author Adam Siepielski, a biologist at the University of San Diego. “Going from one event to 70 each year is a substantial increase, especially given the increased magnitudes of mass mortality events for some of these organisms.” - Link

If we shed our anthropocentric blinders, the harsh reality is that nothing of substance is being done to prevent our own extinction, and after looking back at humanity’s track record for slowing down this beast of globalized industrial civilization even one iota, any sane and rational person would have to conclude that there are forces at work well beyond the control of any one group of people, any state, or even any one country. Humans have the dubious honor of being the earth’s first sentient beings to have thoroughly documented their own demise while arguing with each other over whose fault it is. And the longer the Keeling Curve stretches skyward, the greater the odds that we will pull the trigger on a geoengineering scheme to slow down the inevitable:

Do these experts—the top scholars and scientists researching the subject in the world—think we will see geoengineering in our lifetime?

“Let’s see it for ten years,” the emcee said. A few scientists cautiously raised their hands. Twenty and 30 years saw some more converts. When he called out “fifty years,” more than half the room had their hands up.

That, according to the experts, is a 50-50  shot that someone is going to try, this century, to engineer the Earth’s climate. To hack the planet. - Link

Techno-capitalist carbon man’s fetish with high-tech gadgetry has already gotten the best of him. Just look at us glued to our iphones, tv’s, internet, and sundry other social media tools. We’re addicted to and dependent on our technology, and the idea of pulling the power plug on this way of life is unthinkable, not to mention fatal, for those raised within its confines.

“In Earth’s history we see climate changes over time, and we know that some of these climate changes were associated with enormous biological destruction. How could we believe that the same sort of experience moving into the modern-day wouldn’t do the same thing?” ~ Dr. Peter D. Ward

Posted by seemorerocks at 11:27