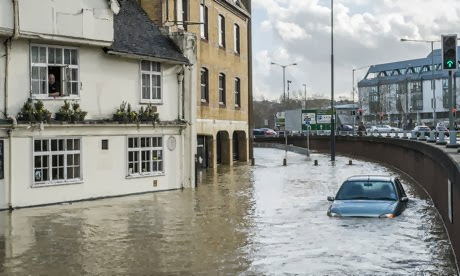 The UK faces the prospect of more floods and disruption on Friday after high winds and rain were forecast to arrive from the Atlantic in the early hours.

Weather forecasters have warned that 80mph winds and blustery showers could cause further significant flooding as thousands of families struggle to recover from the storms that preceded Christmas. About 1,000 homes in south-east and south-west England have been flooded and at one stage more than 300,000 properties had no electricity.

The Met Office said widespread gales were likely to develop late during Thursday night or in the early hours of Friday morning bringing gusts of more than 50mph inland and of 70mph to 80mph to some coastal areas and high ground. North Wales and the north of England are expected to be worst hit by high winds.

Helen Roberts, a forecaster from the Met Office, said: "The storm will push in from the west overnight, bringing wet and windy weather to much of the UK. There will be very strong gales inland at times and severe gales on the western coast.

"There will be about 10-20mm of rain for many areas, possibly 25mm in some locations. This is not a huge amount of rain but because it will be falling on very saturated land, even relatively small amounts of rain could cause further problems."

On Thursday evening, the Environment Agency had 53 flood warnings in place, most of them in the south-east (25), the Midlands (13) and the south-west (5).

A Met Office spokesman said: "The public should be aware of the potential for disruption, especially where the high winds are combined with heavy rainfall."

He said a deep area of low pressure developing over the Atlantic Ocean would bring more wet and windy weather across the UK as it tracked north-eastwards past north-western Britain later on Thursday and during Friday.

"Peak winds are thought most likely to occur during the early hours of Friday and Friday morning with the highest gusts probably being over Irish Sea coastal areas," he said.

There was some consolation as he said the likely impact was presently thought to be "less severe" relative to other recent storms to have hit the UK.

The Energy Network Association said 13,000 properties remained without power on Thursday morning after 50,000 had no supplies on Christmas Day.

UK Power Networks, which delivers power to about 8 million customers in the south-east, the east of England and London, said that by Thursday morning there were around 8,000 without power in the area.

The director of customer services, Matt Rudling, said: "All our efforts today remain fully focused on reconnecting power supplies in the quickest way possible. Extra staff are on duty, many of whom have cancelled their leave to help with the repair effort or to join our additional call centres. We know this is a very difficult time for our customers and we want to thank them for their understanding."

The bad weather also hampered the annual Christmas getaway. Some of the most chaotic scenes were at Gatwick airport, where a power outage at its north terminal led to more than 35 cancellations and long delays. Police stepped in to calm angry passengers. The Civil Aviation Authority (CAA) has said it may launch an investigation into the problems, which came two months after flights were badly delayed by a storm.

A CAA spokesman said: "We need to know exactly what happened at the airport. Once we have that information we can decide if there is any further action we need to take."

The airport said heavy rain caused flooding from the river Mole into airfield substations and the north terminal.

Thousands Left Without Power in US and Canada

Utility crews from Maine to Michigan and into Canada worked Wednesday to restore power to the more than half a million homes in the U.S. and Canada that were left in the dark by last weekend's ice storm 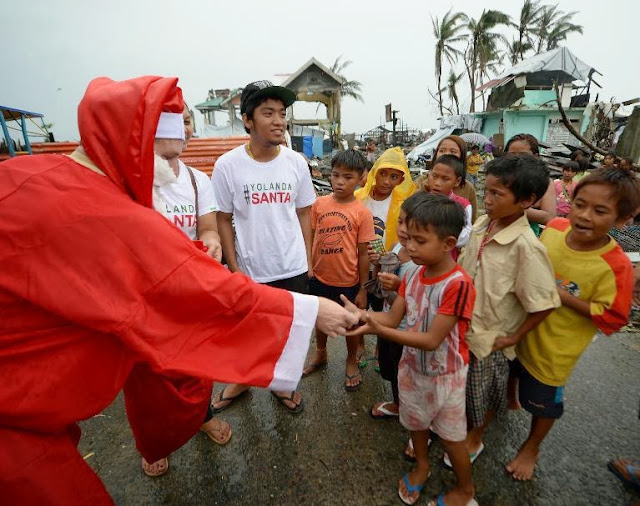 Groups of children in plastic raincoats braved the incessant rain in the devastated central city of Tacloban, knocking on doors in trick-or-treat fashion and beseeching pedestrians for candies, coins and other Christmas presents.

But housewife Susan Scala sat glumly under a white tarpaulin in one of Tacloban's many tent cities for those made homeless by Super Typhoon Haiyan. At a time when her family should be celebrating, all she could think of was her missing husband.

"Even if it's not Christmas I don't stop thinking about him," the mother of five said of her husband Oscar, a telephone utility worker believed lost at sea when giant waves whipped up by the November 8 storm swept away homes in the city's San Jose slum.

Like many of the city's survivors, the miserable weather made Scala nervous. "This incessant rain is scary. It reminds me of what happened (during the typhoon)," the 53-year-old said.

Haiyan left more than 6,100 people dead and nearly 2,000 others missing, many of them from Tacloban and nearby towns, in the storm-prone country's deadliest typhoon disaster.

About 4.4 million others were left homeless across the central islands and now live in tents provided by aid agencies or rough shacks fashioned by survivors from the wreckage of destroyed homes and fallen trees.

At the city's ruined Sagkahan fish port, 67-year-old widow Emiliana Aranza pulled sweets and shortbread from jars at her makeshift store outside her shanty to give to the children who knocked on her counter.

"It's a sad Christmas Day. We have lost our home and the government will not allow us to rebuild here as it's too close to the shore," she told AFP.

View gallery
Young survivors of the super Typhoon Haiyan brave rain as they walk the streets to ask for gifts fro …
But she said sharing what was left of her possessions had an uplifting effect.

"There are still a lot of reasons that we should be thankful to God," Aranza said, including the fact that her two adult children and their 13 sons and daughters, who now have to live together in the cramped shanty, survived the disaster.

"Because of the typhoon, members of my family are now tightly knit. Gone are the petty quarrels," she added.

Scala said her family ate a traditional midnight meal on Christmas Eve in keeping with tradition in the largely Catholic nation. But they had to make do with tinned sardines and steamed rice, part of the weekly aid rations from the government and humanitarian agencies.

For breakfast on Christmas Day, she said her family ate the previous night's leftovers and would have to make do with instant noodles for lunch.

She has no idea where she will get the money to build a new house or whether she will be able to send her two school-age children back to school.

The Papal Nuncio to the Philippines, Archbishop Giuseppe Pinto, acting as a representative for Pope Francis, celebrated Christmas mass in Tacloban and urged the faithful not to lose hope.

The Save the Children charity had planned to host an event with sports and art activities to cheer up about 300 children on Christmas in the storm-ravaged city of Ormoc, said programme manager Reggie Aquino.

But local officials in the city 45 kilometres (28 miles) from Tacloban cancelled the event due to the rain.

Instead, the charity held the event in a tent for children in the nearby town of Kananga where there was just heavy drizzle.

In central Tacloban, Maria Meneses, 31, dived into a pile of garbage outside a department store, along with half a dozen or so other residents left impoverished by Haiyan.

"This is for my daughter," she said, showing a salvaged pack of two tiny candy-coloured cake candles that she had spirited into her pink handbag.

"I was waiting for the store to open to buy batteries for my daughter's walkie-talkie toy and told myself, 'Why not, some of those items thrown in among the trash are still in good condition'."

And record dry in Oregon-