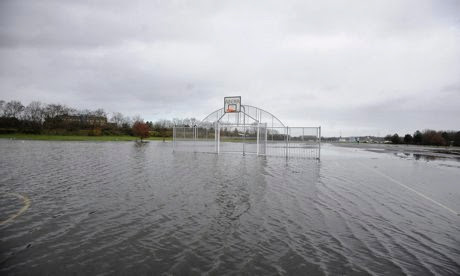 
Thousands of homes are without power and many more threatened by flooding after the second major storm to hit the country in days, which saw wind gusts of more than 100mph and heavy rain falling on to already saturated ground.

Forecasters warned that yet more strong winds and rain are on their way for the south-east of England at the start of next week.

The winds, which saw a peak gust of 109mph recorded at Aberdaron on the north Wales coast, sent trees crashing on to power lines, leaving tens of thousands without electricity, principally in Wales, Cumbria and the south of Scotland. Another 5,000 homes lost electricity supplies in Northern Ireland, with 45,000 more cut off in the Republic of Ireland.

Power companies dispatched teams which restored power to tens of thousands of households. However, by late on Friday an estimated 10,000 homes were still without electricity in England and parts of Wales, with around 3,000 of these, in Kent, Surrey and Sussex, without electricity since Christmas Eve or earlier.

The Energy Networks Association said repairs in the south-east had been hampered by flooding and the aim was to reconnect most people by Saturday. A spokesman said: "We know it's been a horrendous situation for these people, but the floodwaters are receding which means we can now carry out the repairs."

Some of those affected remained angry. Corinne Willson said she and her mother had been without power at her mother's home in Smeeth, near Ashford, Kent, since Christmas Eve morning: "My mum has recently had cancer, so this was meant to be a nice Christmas for her, hosting Christmas. She was really disappointed and stressed out."

Scottish Power said the storm had knocked out electricity supplies for more than 20,000 of its Welsh customers, with supplies reconnected to all but about 5,000. Another 3,000 homes in Scotland, mainly in Dumfriesshire, remained affected. A Scottish Power spokesman said: "The main problem is the wind is still very strong, which means there is some work we can't do, for example at heights."

While the north and west endured the strongest winds, those further south and east faced renewed flood concerns. Although the rainfall was less strong than that seen on Christmas Eve, it fell on to ground that had already been inundated. The Environment Agency had 39 flood warnings in place, which urge those affected to take immediate action, the majority in south-east England, mainly in Kent and Surrey, and the Midlands, with 11 separate warning along the river Severn.

The Met Office warned that while the winds and rain were due to ease in many areas into the weekend they were likely to return from Sunday evening, with some gale-force gusts.

A Met Office spokeswoman said: "The wind is likely to be in exposed areas, so if there are any weather warnings they are more likely to be for rain. The forecast totals are not high but it will be falling on to ground that is already saturated. We have seen river levels rise very quickly today already."

The new storm brought a certain amount of travel chaos, though nothing on the scale of Christmas Eve, in part because relatively few people were travelling.

Airports remained largely unaffected, aside from some early disruption to flights into Dublin and the Isle of Man. However, rail services saw significant problems as operators sent out teams to clear trees and other debris from lines before trains could run.

Southeastern rail ran no services at all before about midday, while mainline trains for East Coast and Virgin saw delays. Services from London to Portsmouth were re-routed after embankment damage closed the line for up to a week between Petersfield, in Hampshire, and Haslemere, about 15 miles away in Surrey.

There were a number of delays on the roads, again caused mainly by debris blown by the winds, and police urged drivers to be particularly cautious.