The Japanese Mob Is Hiring Homeless People to Clean Up Fukushima 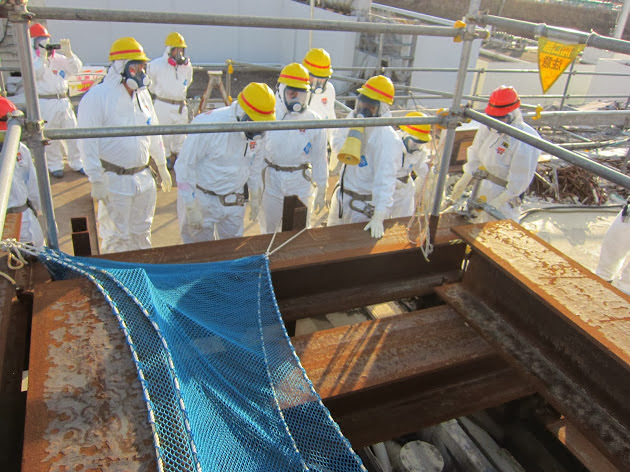 Nearly three years after an earthquake and tsunami caused the greatest nuclear disaster in decades, Japan is still in the early days of its massive Fukushima cleanup effort. Powering the cleanup of the fallout zone is an army of workers making $60 a day to decontaminate the region.

The sheer scale of the cleanup effort is staggering. While decontaminating the Fukushima plant itself will cost tens of billions and take years, there are also the surrounding areas in Fukushima prefecture, where cleanup costs are expected to top $30 billion. With Tokyo Electric Power Co. (Tepco), the owner of the Fukushima plant, essentially nationalized at this point, Reuters reports that there's some $35 billion in taxpayer funds on the table for contractors.

That's turned the Fukushima cleanup into something of a boom industry, with a number of shady entities trying to score a piece of the pie. Some highlights from the newest Reuters report, which is definitely worth reading in full:

Members of Japanese organized crime were arrested three times this year "on charges of infiltrating construction giant Obayashi Corp's network of decontamination subcontractors and illegally sending workers to the government-funded project," which in some cases were homeless people hired by recruiters paid bounties on each minimum-wage worker they could sign up.

Obayashi, Japan's second-largest construction company, isn't accused of wrongdoing; the subcontractors implicated in arrests were as many as three companies removed from Obayashi itself. How does that happen? There are hundreds of companies involved in the cleanup effort, and oversight is lacking.

The total number of companies received taxpayer funds hasn't been released. "But in the 10 most contaminated towns and a highway that runs north past the gates of the wrecked plant in Fukushima," reads the report, "Reuters found 733 companies were performing work for the Ministry of Environment, according to partial contract terms released by the ministry in August under Japan's information disclosure law.

Reuters found 56 subcontractors that shouldn't be allowed to be given government contracts because they didn't have proper clearances from Japan's construction clearances. Five firms listed on the Japanese Environment Ministry's list of cleanup contractors don't even exist.

With a project that's unprecedented in scope, and one that's been rushed from the start, it's to be expected that there will be some level of waste. After all, finding experienced contractors to bid against each other is a lot easier for a road construction project than it is for nuclear disaster cleanup. But the morass of sketchy contracting companies and sheer lack of oversight as described by Reuters is astounding.

But that lack of oversight isn't particularly surprising. A previous Reuters report found much of the same: With flat wage growth and few workers willing to take on the cleanup, hundreds of subcontractors have filled positions by relying on recruiters willing to find labor from anywhere.

The oversight problem isn't limited to labor, either: Earlier this year, the Japanese Nuclear Regulation Authority (NRA) downgraded the Fukushima disaster to its worst rating since its initial post-earthquake peak, thanks to the finding that temporary tanks for storing radioactive waste were leaking at the power plant site. At the time, the NRA said it wasn't sure if Japan could manage the cleanup on its own.

"The current situation is at the point where more surveillance won't be enough to keep the accidents from happening," NRA chairman Shunichi Tanaka told reporters at the time. "Our job is now to lower the risk of these accidents from becoming fatal."

Along with the leaks from storage tanks, a number of massive leaks have come from the Fukushima site, largely ending up in the Pacific. At the center of those problems is Tepco, which remains the authority controlling the decontamination of the Fukushima reactors, and which has consistently failed to maintain proper records and standards, even following billion-dollar injections of government cash.

In October, Japanese Prime Minister Shinzo Abe said his country was open to receiving international assistance, which came after a series of international calls for exactly that. It's unclear what form that might take, but having a stronger authority overseeing the project may help. Whether it's the power plant or the surrounding prefecture, it's becoming increasingly clear that the Japanese government has shown a severe lack of oversight of the Fukushima cleanup.

Former MSNBC host told not to warn people about Fukushima meltdowns: “The official gov’t position is that it’s safe”
“Now go explain that to people who served on the USS Ronald Reagan”

Cenk Uygur, co-host: I was on MSNBC at the time when this happened, I said, “Don’t trust what the Japanese government is saying, they’ll say trust what the electric power company is saying. Go, go, go, get outta there. Get as far away from that plant as you can. It’s literally a core meltdown.” And they always don’t want people to panic, so they were always like, “Oh it’s going to be okay.” [...] I’m like, “You’re crazy man, don’t be anywhere near that reactor.” And I remember at the time, of course not at The Young Turks, but on cable news, people were like, “Hey Cheynk, you know, I don’t know that you want to say that, because the official government position is that it’s safe.” Oh, is that the official government position? Now go explain that to the people who served on the USS Ronald Reagan.

Uygur: So the next time you hear the government tell you, “Oh no, no, this is our official position that it’s not that bad to be near the nuclear meltdown,” don’t believe the hype. Get the hell out of there.


Unit 3 Mox Fuel is two million times more dangerous than any other reactor on earth , is spewing new Death Plumes , meaning new death streams . We will get them here in BC Canada tonight and yesterday and tomorrow etc etc . Think of the Death Streams like a big ground swell after a storm at sea that continues for thousands of miles till it slams into a few 1000 miles of coast line . The jet streams are distributing a percentage of those buckyballs all along the way and they hang there and get picked up by lower wind currents and carried along and picked back up in rain and snow or again by the jet stream like a continues flow we can not see , hear , smell , feel or taste . So how will you know how much , well its been a state secret for over a 1000 days , do you think its because nothing happened or do you think its because something is happening constantly and a hand full of people decided no one can tell you .