This is the new reality in New Zealand.

Not only are there international war games played out in South Canterbury, but members of the military of a foreign power are given a free hand and the government connives. 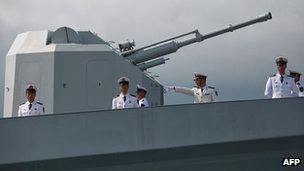 On Saturday, 13 October, and Auckland Friends of Tibet member was peacefully standing on Princes Wharf holding a Tibet flag and displaying “Free Tibet” placard near a visiting Chinese naval ship.

He saw 10 Chinese military personnel march off the ship, surround him and push him behind a parked mini bus. Fearful of being assaulted unseen by the public, he managed to push himself back into the open The men tried to take his flag off him. His partner was also approached by Chinese personnel, who tried to take her camera off her. They did not succeed in this, but they intimidated her into giving them her memory card, but after much negotiation, she was given her memory card but was forced into deleting the photos that she had taken of the incident.

Shaken by what had taken place, the members returned home, and have since laid a complaint with the Police as well as writing a letter to Foreign Minister Murray McCully over the incident which happened on New Zealand soil.

FOT Chairman Thuten Kesang says: “This incident is a violation of New Zealand's sovereignty that members of a foreign country can blatantly ignore our laws. New Zealanders have a right to demonstrate peacefully”

“Further to the incident in October on Princes Wharf between a FOT member and Chinese military, members may be surprised to learn that we have not had any acknowledgement of my letters to both the Foreign and Defence ministers seeking an apology from the Chinese ambassador in New Zealand.

“It is very disturbing that a law-abiding New Zealander carrying out a peaceful demonstration on a public wharf can be manhandled by members of a foreign military and his flag ripped out of his hand, his camera snatched and its images forcibly deleted, yet nothing was said or done by the New Zealand government. Shame!”