Flood warnings remain in force for parts of Wales, England and Scotland as 80mph gales are predicted for south-west England 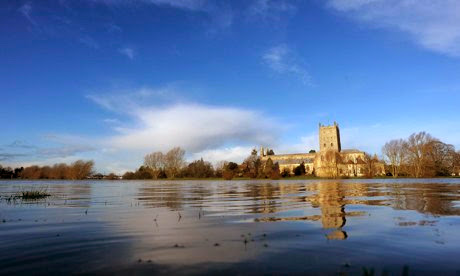 
A day of frost and sunshine on Sunday may prove to have been merely a brief respite from storms, with the Met Office warning that more gales and heavy rain will sweep in from the south-west to disrupt the Monday morning commute.


Although engineers restored power to thousands of homes over the weekend, around 600 remain without electricity, and some have been cut off since Christmas Eve.


One power company boss, Basil Scarsella, the chief exectuive of UK Power Networks, which owns electricity lines and cables in the south-east, admitted to the Mail on Sunday: "We could not have avoided the damage caused by the storm, but we could have responded to it better."


Many places are threatened with further flooding if heavy rain falls on ground that is already saturated.


Yellow severe weather warnings for both gales of up to 80mph and heavy rain have been issued for parts of south Wales and south-west England, and flood warnings remain in force for parts of Wales, England and Scotland. It has also warned of the danger of ice patches in the south-west on Monday night as temperatures drop to below freezing.


An icy morning on Sunday forced the closure of a section of the M69 motorway in Leicestershire after black ice led to a series of collisions.


George Goodfellow, a forecaster for MeteoGroup, said: "Normally, we would say this is a typical winter storm but because we're still recovering from a string of other storms it is likely to cause more disruption and flooding." He said the south-west would continue to bear the brunt of the storm.


Some 1,300 properties have been flooded during the recent storms in England, the Environment Agency (EA) said.


In Kent Power Networks sent catering vans over the weekend to one of the worst affected villages, Yalding, where on Friday prime minister David Cameron was greeted with angry complaints that the village had been abandoned, with many houses both flooded and without power. The firm also pledged to boost compensation payments from the regular £27 to £75 for anyone who had been without power for more than 48 hours including Christmas Day – with larger payments for those cut off for longer than 60 hours.


In Kent, Surrey and Sussex more than 300 properties were still without power on Sunday, but the firm said that engineers had worked late into the night and resumed early in the morning to restore supply, and that the vast majority of supplies were back to normal. Most of those still without power were single isolated properties.


After his encounters, the prime minister tweeted on Saturday : "I've asked the Dept for Communities & Local Govt to ensure councils have robust plans in case of bad weather and flooding over New Year."


In Edinburgh the organisers of the Hogmanay celebrations, which bring thousands of tourists to the city, will be keeping an anxious eye on the forecasts: although they went ahead last year, bad weather forced last-minute cancellations on several occasions in recent years. Further gales are forecast for New Year's Eve, and heavy rain on New Year's Day.