Antarctic mission on ice as

rescue ship is forced back 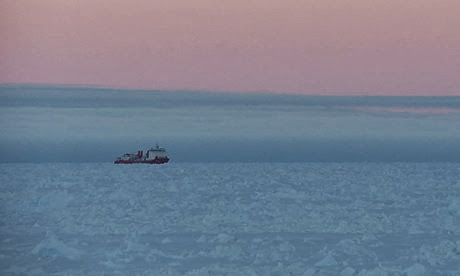 
Cape de la Motte, East Antarctica: the Xue Long appeared as a dot on the horizon, against a bright blue sky, to the starboard side of our ice-locked ship just after dinnertime on Friday evening, local time.

After two days of intense blizzards, with biting cold that had forced us to spend all our time below decks, the break in the weather and the approaching rescue had put the crew and passengers of the MV Akademik Shokalskiy in good spirits.

With temperatures at a pleasantly bearable -1C, some of the crew went on to the ice surrounding the ship in all directions and killed time by making igloos. The rest remained on board and watched the Chinese icebreaker through binoculars as it appeared to make steady progress, silently zigzagging through the ice, from the upper deck of the ship.

As we waited, penguins, apparently confused by the sudden appearance of a solid mass caused by the compacting of ice floes around our vessel, wandered past at regular intervals, looking for the shoreline. 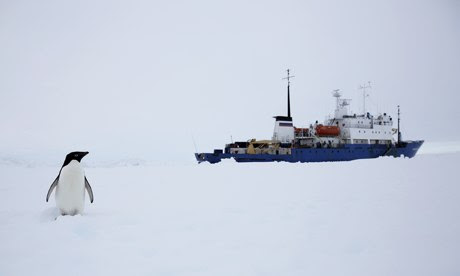 The Akademik Shokalskiy awaits the arrival of the Xue Long, in Antarctica. Photograph: Laurence Topham for the Guardian

But we woke after a brief sleep to the sound of disappointment. An announcement on the ship's noticeboard broke the bad news: after spending about 12 hours cutting through seven nautical miles of ice, the Xue Long had turned around and headed back towards open water.

"The ice was just too thick, and the Xue Long was making very heavy going. The captain decided the best course of action was to wait for a second icebreaker or a change in weather," said Chris Fogwill, a glaciologist at the University of New South Wales and a co-leader of the Australasian Antarctic Expedition (AAE). "We need a westerly wind to release the pressure on the pack ice in the area, or we need two icebreakers."

Fogwill said the Shokalskiy would definitely get out of the ice, but it would now be a waiting game to decide the best strategy.

This 166-metre Chinese ship, whose name means Snow Dragon, will now regroup with the smaller L'Astrolabe, the French vessel sent from the nearby Antarctic base, Dumont D'Urville, which is 18.5 nautical miles from the Shokalskiy. There it will wait for the Australian icebreaker, Aurora Australis, due to arrive in the area on Saturday.

The expedition leader had reassured us earlier that this kind of venture always allowed for this kind of contingency. It would, he said, be a couple of weeks before we were reduced to dehydrated food.

We had run into trouble two miles from the Antarctic shore and can clearly see the ice caps. All around us is a flat landscape of ice, stretching out for 18 nautical miles. The sight is not unlike the images sent by Curiosity Rover from Mars, only in white. 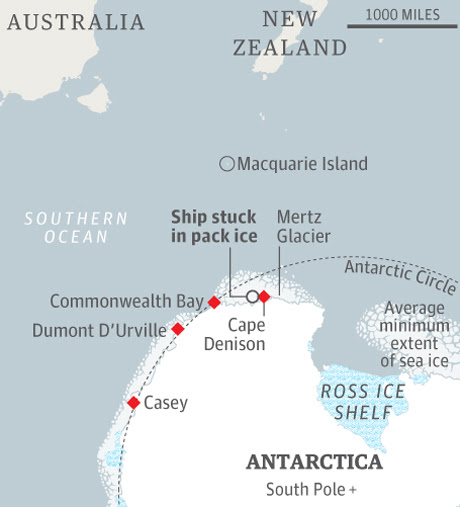 The Russian-controlled Shokalskiy became trapped in heavy ice on Tuesday, when it was travelling east around Commonwealth Bay to the Mertz glacier.

Strong south-easterly winds pushed the ice floes in the area towards the Antarctic coastline, forming a dense mass around the Shokalskiy. At the time, the ship was only two miles from the open water. Since then, two days of blizzards have built the ice pack around the ship further – and the edge of the ice sheet, and the open water beyond, is now between 13 and 18 nautical miles from the ship.

"It's a bulbous shape and we're right in the middle of it," said Fogwill. "The nature of Antarctica is very different to the rest of the world – everything is at a bigger scale. Storms are ever present, the rate at which they shift is very unpredictable because there is so much ocean around. At the edge of the continent you have strong weather systems and the speed at which things can happen is astronomical. It's so far outside our normal frame of reference."

The Shokalskiy became stuck just over two weeks into its month-long journey, from Bluff in New Zealand to Commonwealth Bay in East Antarctica. It is now at the Antarctic continent's Cape de la Motte, 1,500 nautical miles from Hobart in Tasmania. On board are 48 passengers – half of them scientists, the other half paying members of the public who are assisting in the experiments – and 20 crew members, following in the footsteps of the great Antarctic explorer and scientist Douglas Mawson, leader of the original AAE of 1911.

The ship has been sailing through the Southern Ocean since 8 December, repeating and extending many of Mawson's wildlife, ocean and weather observations in order to build a picture of how this part of the world has changed in the past 100 years. 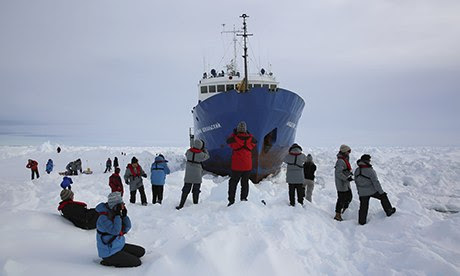 The crew of the Akademik Shokalskiy venture out on to the ice. Photograph: Laurence Topham for the Guardian

The expedition had already reached the fast ice off Commonwealth Bay, carrying out measurements of the Southern Ocean along the way. A small team of scientists and conservationists also reached Mawson's Huts at Cape Denison on Thursday last week, 40 miles across the ice from where the ship was anchored.

The Xue Long discovered that the ice at the edge of the pack was much thicker than it expected – around three to four metres thick in places – and the going was slow. It reported travelling at just between 0.1 to 3 knots due to the density of the ice it encountered. Technical issues with its engines meant L'Astrolabe did not enter the ice field at all. "We know the ice conditions around us are extremely difficult and the ice is under a lot of pressure," said Greg Mortimer, a co-leader of the AAE, aboard the Shokalskiy.

If the Xue Long had reached the Shokalskiy, it would have likely cut a ring in the ice around our ship so that our captain could manoeuvre it into the newly opened channel behind the Xue Long. "It's quite an elaborate operation and one that takes some time," said Mortimer.

The plan would then have been to sail the Shokalskiy close behind the Chinese vessel as it carved a new channel through the ice and headed back to the open waters of the Southern Ocean. That could have taken more than a day.
Given the circumstances, the Shokalskiy is now unlikely to reach open water until Saturday at the earliest.

Speaking before the Xue Long had turned around, Janet Rice, the Green party senator-elect for Victoria, Australia, who has been on board the ship since it left New Zealand, said: "I understand why people might be concerned, but the feeling today on board the ship is like a summer holiday when the weather is bad, when you're stuck inside reading books and playing Scrabble. We've been assured that we're in no danger and it's just a matter of waiting."