This guy is a climate change denier and reckons all the extreme weather was caused by Fukushima. I cannot possibly take this too seriously myself.

First Japan came for the Pacific,Then Philippines Falls,Then Atlantic, Now its coming for you


Significantly high level of all β nuclide (including Strontium-90) is detected in groundwater on the seaside of reactor2, and it’s breaking the highest records every time Tepco analyzes.


This is the groundwater sampled from one of the borings between reactor2 and the sea.

Even though the readings are not increasing at other borings, Tepco has been insisting that it is possibly because the groundwater pump is gathering the high level of contaminated water underground.

Tepco is denying the possibility of an unverified leakage of extremely highly radioactive water underground. 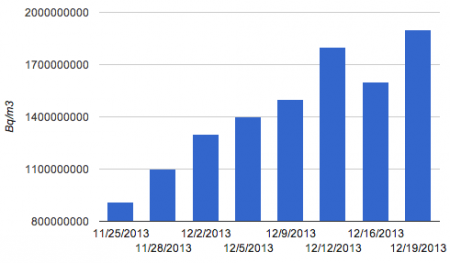