Mass death of penguins in Antarctica

Mass starvation of penguins on Cape Denison, as iceberg blocks access to ocean and food 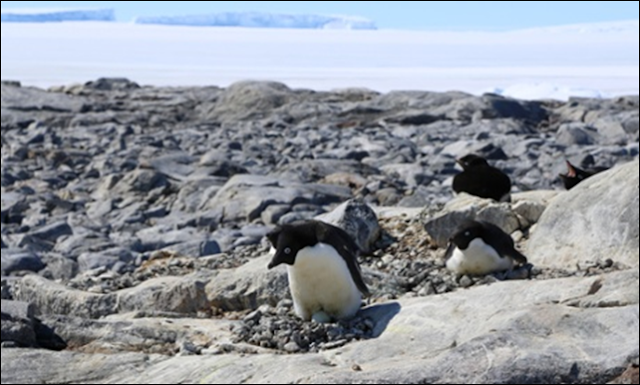 Every coast or sea we have visited in Antarctica, we have seen penguins. They come to the shoreline to investigate our ship as we sail past, they hop on and off ice floes, flocks of them fly in formation through the water. Night or day, there are always a dozen penguins, at least, within sight of the ship.

At Cape Denison, where Douglas Mawson built his base camp, the colony of Adelie penguins consists of several rookeries, each one spread across the rocks in the valleys around his huts. “Weddell seals and Adelie penguins in thousands rested upon the rocks,” wrote Mawson about ariving at Cape Denison in January 1911. “The latter chiefly congregated upon a long, low, bare islet situated in the centre. This was the largest of the group, measuring about half a mile in length.”

He often wrote about the birds in his accounts, and one of the rocky outcrops near the huts was even nicknamed Penguin Hill. The plentiful numbers meant there was always a potential source of fresh meat, his expedition-members noted, but no one at the time made any scientific counts of the birds.

At Cape Denison last week, the descendants of those penguins were still there. The presence of the fast ice around iceberg B09B, though, had left its mark: the birds were short of food and their numbers were falling.

On our brief visit to Mawson's huts last week, ornithologist Kerry-Jayne Wilson spent her 10 hours at the site walking several kilometres up and down the scree slopes in the surrounding valleys, counting penguin nests.

“What we want to know is the number of pairs of penguins nesting here this year,” she told me before starting the count. “They'll be incubating their eggs and so, for every pair nesting, there will be either the male or female incubating their two eggs. That's the key parameter for us to measure.”

Adelie penguins breed around the ice-free areas of the continent of Antarctica. Along with the Emperor penguins, Adelies are among the southernmost of the penguins and, because they rely on the presence of pack ice around the continent to survive, their populations can track changing ice conditions in the region.

Iceberg B09B has cut off Cape Denison from the Southern Ocean and filled Commonwealth Bay with fast ice, locked to the land. “Fast ice is a problem for penguins because it's continuous ice cover that prevents penguins from having access to the sea for feeding,” says Wilson. “If the fast ice is extensive, the parent penguins have to go much further to obtain food, that means the one left sitting on the eggs has to sit for longer, that means chicks get fed less often, that means that birds are less able to get into breeding condition before the breeding season begins.”

Penguins have a limited range over which they can forage while breeding, they cannot walk or swim too long before they have to come back and relieve their partner at the nest.

At Cape Denison, Wilson took me to a small rookery about a kilometre over the hill from Mawson's main hut. Looking down the slope, there were about a hundred or so penguins sitting on or near nests they had made from piles of rocks. Whenever they stood up, we could see large eggs under their guano-stained bellies. A few hundred metres beyond them, further down the slope, we could see the shoreline where the ocean would have been four years ago. All we saw that day was ice, all the way to the horizon. Beyond that was another 50km of ice. There was no open water anywhere.

We stood about a metre away from a few of the penguins – one of them sat on its nest – which ignored us. It was nearly midnight but the sun was high and warm in the sky. Wilson had finished her count of the birds and confirmed that the numbers were down. There were still many thousands, she said, but they were more sparsely spread than previous counts had recorded in the 1980s.

She also said that a great number of eggs had been abandoned in the rookeries. These eggs were either sitting alone in the rocks or being incubated without much enthusiasm from the parents. I saw what she meant – instead of sitting on their eggs, some of the penguins would just stand next to them, occasionally rolling the eggs around between their feet.

Most worrying, though, was the sheer number of dead chicks that littered the rookeries – penguins that had not quite survived to their first moult. If food is scarce, said Wilson, adult Adelie penguins tend to give up on rearing their young for that year, preferring to try again the following breeding season when there might be a better chance of survival.

Perhaps the most eerie thing about the rookeries was how quiet they were. We've seen a lot of penguins in the past week and, whether they are alone or in groups, you can be sure of one thing about the birds – they like to make a noise. However close we stood next to the nesting penguins at Cape Denison, they stayed silent. Whether sitting or standing, they ignored us completely, not moving, staring directly ahead the whole time we walked around them.

Wilson said that the decline in penguin numbers at Cape Denison will continue as long as the fast ice persists. Wilson says that adults birds, which can live for several decades, will breed less or stop altogether until the ice breaks up and food becomes plentiful again. That means that there will be no new blood at the rookeries for a long time. And neither will the penguins try to move to another part of Antarctica, with easier access to the coast. Once the establish themselves at a rookery, they will stay there for life, she said. If their food source dries up, they will just wait for it to come back.

“That has happened in a number of places around Antarctica,” says Wilson. “To some extent it's a natural process and that will happen from time to time at a number of colonies. But, with climate warming, the rate at which icebergs are calving off the ice edge is increasing so the number of times in which icebergs will cut off access to colonies is going to occur more frequently.”

When the fast ice eventually breaks up at Commonwealth Bay, penguin numbers will start to rise again, assuming the colony has not been irrevocably devastated. With the fast ice still there, though, it is now a slow war of attrition between the number of penguins and the extent of the ice.