Came across this by accident – it won't appear anywhere in the print media, you can bet.

Canterbury has exerienced about 100 mm of rain over a period when there is usually a lot of sunshine and is threatening flowering vegetable crops because the bees are not pollinated.

At least we still have some bees, but welcome to the Future!


Flooding in Coromandel, NZ
Some campers in the Thames area and Coromandel Peninsula have cut their summer holiday short after being flooded out in Sunday's severe storm. 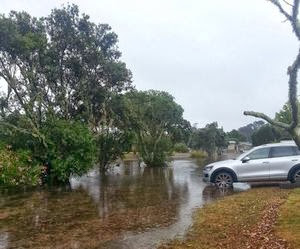 Heavy rain led to flooding in Whitianga and Tairua, and sudden high winds tore roof tiles from houses in Papamoa.

MetService says 120mm of rain fell in the area around Whitianga between 11pm on Saturday and 11am on Sunday.

The rising water affected campsites, with families forced to leave their submerged tents, and some choosing to go home.

Up to 10 families at the Otama Beach Camp had to be moved as flood waters 60 centimetres deep engulfed their tents.

Campground manager Claire Elliot says it could take days to dry out fully, and though some families have decided to go home early, others are staying on.

Police say despite some slips earlier in the day, all roads around Thames and the Coromandel are now open.

Thames Valley civil defence area manager Gary Talbot says the flooding at Pauanui receded after the rain stopped and now there are just a few campers and people with lower basements that will need drying out.

Mr Talbot says contractors have now cleared all slips from the roads.
A farmer in Whenuakite, south of Cooks Beach, says what's been bad for campers has been good for farmers.

Anthony Hamilton says the land was starting to get dry and the rainfall should see farmers through well into next month. He says up to eight hectares of his land is underwater.
Posted by seemorerocks at 09:51