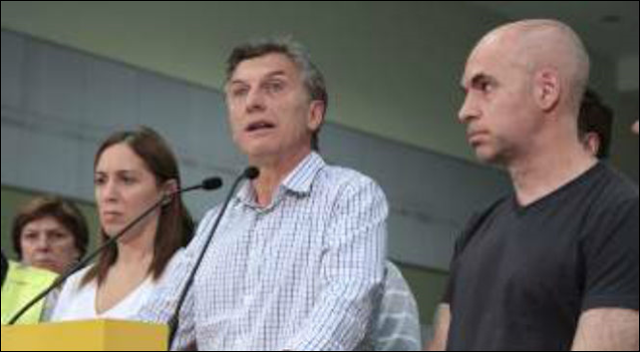 
29 December 2013 (M24 Digital) – The Mayor of Buenos Aires Mauricio Macri, declared on Saturday a state of “emergency” in the city of Buenos Aires as a result of power outages and called the nation to form a committee to “monitor the crisis” and work to solve the problems.


In a press conference, Macri announced that there will be day off for the Buenos Aires public administration on Monday, which could be extended to 2 and 3 January if the high temperatures and lack of electricity continue. They had also convened the first meeting of the committee for this Sunday at 10:00 in the Single Center for Coordination and Control (CUCC) .


There will be present the deputy chief of the City Government, María Eugenia Vidal, and Cabinet Chief Horacio Rodríguez Larreta, but especially Macri asked officials of the national government to assist such as Security Minister Maria Cecilia Rodriguez, to “join forces and find solutions for the people.”


“Given the continued problems and the heat wave that will continue until Tuesday, Macri declared the emergency in the City and said: “We expect the national government to attend this Committee and its protocols to solve the problem in the coming days.”


Accompanied by many of his Cabinet, the mayor of Buenos Aires asked the national government and the concessionaires “for transparency in the information” about the cuts and remarked that “people feel abandoned and unprotected.”

28 December 2013 (Buenos Aires Herald) – Planning Minister Julio De Vido renewed his criticism of Edenor and Edesur companies urging their board members to resolve the power outages affecting hundreds of families in Argentina as a heat wave currently hitting the country is expected to give no break at least till Wednesday 31 with temperatures topping an average temperature of 36°C.


De Vido made the statements after visiting the Atucha II nuclear energy plant along with Cabinet Chief Jorge Capitanich.


“With extraordinary temperatures over the past days, a heat wave beyond comparison, companies have not been up to (Argentina's) industrial development and growth,” the Planning and Public Services Minister told reporters and warned sanctions will “aggravate” "minute by minute" if electrical suppliers don’t restore the service in the areas that have experienced power cuts over the past two weeks, such us the neighborhoods of Caballito, Villa Crespo, Recoleta and Mataderos in Buenso Aires City.


“They have to face people. Sanctions will aggravate minute by minute if they don’t do what they have to do and that is to assume their role,” De Vido insisted and urged Edenor and Edesur leadership to have “social responsibility.”


With a record-breaking heat wave stifling the South American country over the past two weeks, the minister pointed out the government will be deciding on companies’ sanctions next week when cooler temperatures are expected to give some relief to Argentineans.


23 December 2013 (Latino Daily News) – In the midst of a heat wave, thousands of Argentines living in the capital’s metropolitan area on Sunday are still without power, while demand for electricity keeps growing and reaching peak levels, the Federal Planning Ministry said.


The Argentine power grid set a new record for electricity demand on a Saturday when the consumption level reached 20.605 megawatts, the ministry said in a statement.


The new record exceeds the old one set last week, when power demand peaked at 20.287 MW.


The electricity consumption level is directly related to the high temperatures that have been registered all over the country for more than 10 days and the high level of economic activity, the ministry said.


Despite everything, however, “the system is operating normally and has an additional reserve of 4 megawatts,” the ministry said.


Complaints, protests and street blockades staged because of the power shortages, however, continued in some capital neighborhoods and in the surrounding metropolitan area.


The high temperatures which have been punishing central and northern Argentina for a week - often exceeding 35 C (95 F) - are raising electricity consumption in most homes as people try to beat the heat, a situation that has resulted in significant blackouts, many of which still have not been resolved. [more]


After breaking national grid records on Saturday and Sunday, power demand reached 23,334MW on Monday (Dec 16) at 3:00pm, beating the previous workday record of 22,552MW set on July 22, 2013, according to a statement by the federal planning ministry.


The ministry reiterated the grid was operating normally on Tuesday and that there was at least 2,500MW of spare generation capacity, however, press reported outages in the Buenos Aires metropolitan area as a result of increased demand for air conditioning and ventilation.


In a separate press conference, planning minister Julio De Vido denied claims the outages were due to lack of investment and planning and instead attributed them to irresponsible power distributors.


Given a request by Argentine grid operator Cammesa amid the heat wave, Uruguayan grid operator ADME said that power stations Batlle, Bonete, Punta del Tigre, Palmar were run at full capacity while Salto Grande, a 1.89GW binational hydro plant on the Argentina-Uruguay border, was used to meet the remaining demand.


Power from Uruguay's Punta del Tigre, APR A, B, C, and CTR plants was exported to Argentina on Monday and Tuesday, according to ADME. [more]