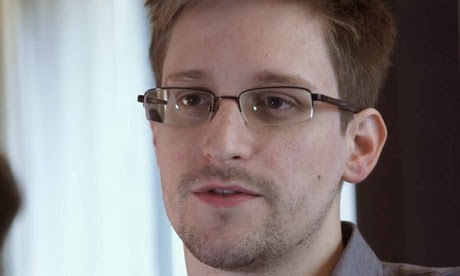 Edward Snowden, the whistleblower who prompted a worldwide debate when he leaked a cache of top secret documents about US and UK spying, has recorded a Christmas Day television message in which he calls for an end to the mass surveillance revealed by his disclosures.

The short film was recorded for Channel 4, which has 20-year history of providing unusual but relevant figures as an alternative to the Queen's Christmas message shown by other UK broadcasters. It will be Snowden's first television appearance since arriving in Moscow.

The address, broadcast at 4.15pm on Christmas Day, was filmed in Russia – where Snowden is living after being granted temporary asylum – by Laura Poitras, a film-maker who has closely collaborated with him on the NSA stories.

Snowden said George Orwell "warned us of the danger of this kind of information" in his dystopian novel, 1984.

Snowden said: "The types of collection in the book – microphones and video cameras, TVs that watch us – are nothing compared to what we have available today. We have sensors in our pockets that track us everywhere we go. Think about what this means for the privacy of the average person.

"A child born today will grow up with no conception of privacy at all. They'll never know what it means to have a private moment to themselves an unrecorded, unanalysed thought. And that's a problem because privacy matters; privacy is what allows us to determine who we are and who we want to be."

Snowden notes the political changes that have taken place since his leaked the cache documents to newspapers including the Guardian. He highlights a review of the NSA's power that recommended it be no longer permitted to collect phone records in bulk or undermine internet security, findings endorsed in part by Barack Obama, and a federal judge's ruling that bulk phone record collection is likely to violate the US constitution.

Snowden says: "The conversation occurring today will determine the amount of trust we can place both in the technology that surrounds us and the government that regulates it. Together we can find a better balance, end mass surveillance and remind the government that if it really wants to know how we feel, asking is always cheaper than spying."

The latter comment echoes a sentiment expressed by Snowden during a series of interviews in Moscow with the Washington Post, another paper that has carried revelations based on documents leaked by him. In this, Snowden said the effect of his actions had meant that "the mission's already accomplished".

In the newspaper interview, he added: "I already won. As soon as the journalists were able to work, everything that I had been trying to do was validated. Because, remember, I didn't want to change society. I wanted to give society a chance to determine if it should change itself.

"All I wanted was for the public to be able to have a say in how they are governed."

The alternative Christmas message, a counterpoint to the traditional festive broadcast by the Queen, began in 1993 with a broadcast from the writer and gay activist Quentin Crisp. Other notable participants include Iran's then-president, Mahmoud Ahmadinejad, in 2008, and a team of midwives two years later.