Storm headed for
the UK

"Look at this monster of a storm approaching the UK.

Yes, it is the same beast that swept across the US generating torrential rains and tornadoes and then snow as it moved more northward. Then it raked across southern Ontario and the Maritimes, burying Toronto and many other cities under a layer of ice.

As it crosses the Atlantic it has been gaining strength and the expected 920 mb pressure low is that reached in Category 4 Hurricanes.

I hope that the UK battens down the hatches. I think that this is only very early times for abrupt climate change, and these storms will be much worse moving forward. 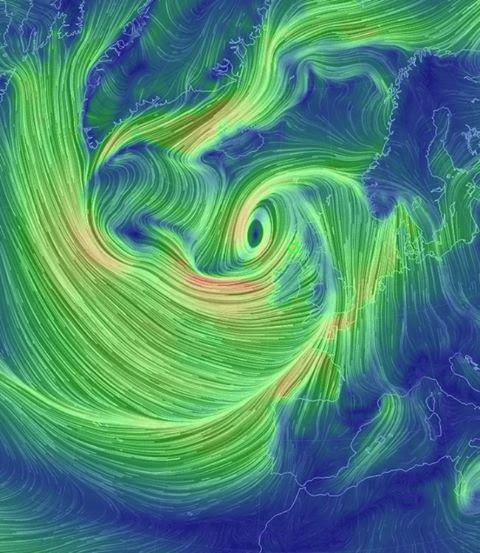 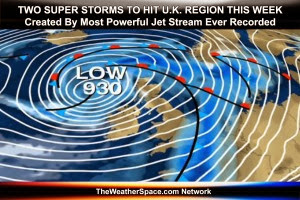 A massive storm system is moving out of the United States today, which went through Canada yesterday … carries with it the strongest jet stream now ever recorded that will cause two super storms in the United Kingdom region this week.

As if engineered, this never before seen jet stream of 275 mph in the upper levels is exiting Canada. This jet stream will move across the Northern Atlantic and deepen a surface low that is only 1004mb at this moment. This jet stream will act as a vacuum, sucking the air from the center of the storm and dropping the pressure within it to an impressive 930mb low. This is a pressure fall over over 50mb by Monday evening and Tuesday morning for the United Kingdom region. It will cause problems, with the initial concern will be the amount of rain for Wales, Central and Southern England where over 50mm of rainfall will fall. Double that over the hills. The rain will fall on already saturated ground which will lead to flooding.

Very windy on Monday with the system, about 70 mph gusts likely in the South. On Christmas Eve expect 70-80 mph wind gusts in Northern Ireland and Western Scotland … with heavy snow in the Scottish Mountains. Weakening winds across Northern Scotland on Christmas day with winds relaxing … for the most part it looks nice on Christmas.

But we’re not done yet. This powerful jet will deepen yet another low pressure system on Friday and this warm front will sweep across Ireland with tornadic dynamics. It’s very likely that with this surface low being much further south than the first one that shear and warm air advection through Ireland will cause a tornado scenario there so be exceptionally alert.