Surge in cancers among young in Fukushima, but experts divided on cause
Fifty-nine young people in Fukushima prefecture have been diagnosed with or are suspected of having thyroid cancer, but experts are divided about whether their illness is caused by nuclear radiation. 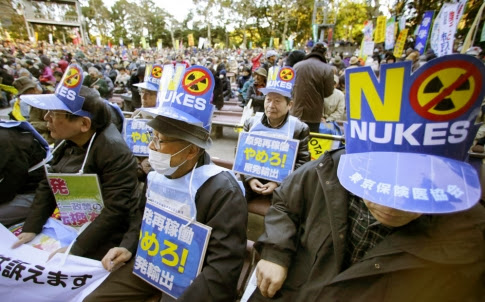 All of them were younger than 18 at the time of the nuclear meltdown in the area in March 2011. They were identified in tests by the prefectural government, which covered 239,000 people by the end of September.

At a meeting hosted by Japan's Environmental Ministry and the prefectural government on Saturday, most experts were not convinced radiation leaks from the Fukushima nuclear plant could trigger thyroid cancer in children so soon, the Asahi Shimbun reported yesterday.

Among those who voiced alarm was Toshihide Tsuda, a professor of epidemiology at Okayama University. He called upon the government to prepare for a possible increase in cases in the future.

"The rate at which children in Fukushima prefecture have developed thyroid cancer can be called frequent, because it is several times to several tens of times higher," the newspaper quoted him as saying.

He compared the figures in Fukushima with cancer registration statistics throughout Japan from 1975 to 2008 that showed an annual average of five to 11 people in their late teens to early 20s developing cancer for every 1 million people.

Tetsuya Ohira, a professor of epidemiology at Fukushima Medical University, disagreed. It was not scientific to compare the Fukushima tests with cancer registry statistics, he argued.

In November, prefectural officials deemed it unlikely that the increase in suspected and confirmed cases of cancer was linked to radiation exposure.

In the Chernobyl disaster of 1986, it was not until four or five years after the accident that thyroid cancer cases surged.

"It is known that radioactive iodine is linked to thyroid cancer. Through the intake of food, people may absorb and accumulate it inside glands," said Dr Choi Kin, a former president of the Hong Kong Medical Association.

Children might absorb more of it than adults because they were still growing, he said, but it remained to be proven that the radioactive iodine came from the nuclear disaster instead of the normal environment.

The 2011 earthquake and tsunami crippled the Fukushima plant, causing the meltdown of three of its six reactors. More than 23,000 people were killed.

Experts differ over nuclear accident's effect on cancer rate in children
Experts were divided over whether radiation from the Fukushima nuclear accident affected the thyroid cancer rate among children in Fukushima Prefecture, in which 59 young people have been diagnosed with or suspected of contracting the disease.

Most of the experts dismissed the possibility that effects from radiation from the accident at the Fukushima No. 1 nuclear power plant could appear so soon in children.

"The rate at which children in Fukushima Prefecture have developed thyroid cancer can be called frequent because it is several times to several tens of times higher," said Toshihide Tsuda, a professor of epidemiology at Okayama University, at the meeting on Dec. 21 conducted by the Environment Ministry and Fukushima prefectural government at which experts offered their opinions.

Tsuda used the results of cancer registration statistics kept in Japan to support his theory. Those statistics showed that between 1975 and 2008, an estimated annual average of between five to 11 people in their late teens to early 20s developed thyroid cancer for every 1 million people.

"Because there is the possibility that the number of cases could increase in the future, there is a need to implement measures now," he said.

However, Tetsuya Ohira, a professor of epidemiology at Fukushima Medical University, criticized Tsuda's conclusion saying it was not appropriate in scientific terms to compare the results of the testing in Fukushima with cancer registry statistics.

Thyroid cancer screening is being conducted on young people in Fukushima Prefecture who were 18 or younger at the time of the nuclear accident, which was triggered by the March 11, 2011, Great East Japan Earthquake and tsunami.

Shinichi Suzuki, a Fukushima Medical University professor involved in the tests, said there was no link between the effects of radiation exposure and the cases of diagnosed or suspected thyroid cancer.