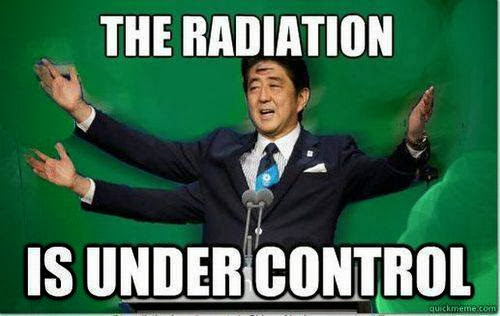 On Tuesday, Tokyo Electric Power Company said some 63,000 becquerels of radioactive materials that emit beta rays, for instance strontium-90, per liter have been detected in groundwater in an observation well at the Fukushima No. 1 nuclear power plant. This sets a brand new high of over 3,500+ times the prior levels of radiation discovered in samples from Fukushima.
The local government is threatening to put people who speak out against the radiation levels in Fukushima in concentration camps according to  Charles Bonner, an attorney who is standing up for Navy Sailors who gave relief to Japan after 3/11 on the USS Ronald Reagan who are now becoming ill.
Charles Bonner said:
“People from Japan will get their opportunity, we will submit declarations on their behalf and their voices will be heard in this lawsuit. We welcome them… they want people in America to know that in Japan —they’re threatening to put people in concentration camps who speak out about the secrets of the risk of harm of nuclear power. They do not want people to speak out about what happened in Japan.”
Charles Bonner represents  over 50 Sailors who served on the USS Ronald Reagan (CVN-76) who are suffering from Thyroid Cancer, Leukemia, and Brain Tumors subsequently for participating in Humanitarian assistance programs during the Japanese earthquake of 2011 relief in Japan.
You can listen to the full interview with Charles Bonner [here:]

Tepco, reported on Dec. 17, 2013: As a result of the measurement, it was found that the gross-β density in the groundwater observation hole No.0-3-2 obtained at the east of the Units 1-4 Turbine Buildings on December 16 [was] 63,000Bq/L.
Jiji Press, Dec. 17, 2013: Highest Ever Radiation Detected in Fukushima Plant Well… Some 63,000 becquerels of radioactive materials that emit beta rays, such as strontium-90, per liter have been found in groundwater. the highest level at the well Tepco said Tuesday’s sample  was taken on Monday from the observation well 5 meters from the coast.Since the company is not takings steps to prevent tainted water in the well from flowing into the sea [...] the water is likely to be reaching the plant’s bay. Standards require strontium-90 levels to be less than 10 becquerels in water to be released into the sea.
Dec. 13, 2013 Sampling: Gross β @ Below detection limit of 18 Bq/L