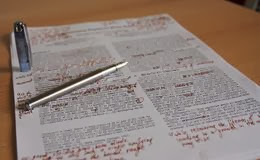 There's no doubt, 2013 was a busy year in climate science. As well as a bumper new climate report from the UN's official climate assessment body - the Intergovernmental Panel on Climate Change (IPCC) - a few bits of research caused quite a stir on their own.

We've cast our collective Carbon Brief mind back over the year to find the five science papers that had everybody talking.
1. What hockey stick graphs tell us about recent climate change
Using fossils, corals, ice cores and tree rings, a study in the journal Science in March became the first to take a 11,300-year peek back into earth's temperature history.
Shaun Marcott and colleagues showed global temperature rose faster in the past century than it has since the end of the last ice age, more than 11,000 years ago.
The story piqued the interest of The Times, The Independent, The Daily Mail and The Evening Standard. And as an extension of Michael Mann's iconic "hockey stick" graph, the paper attracted a good deal of attention from climate skeptic corners too. 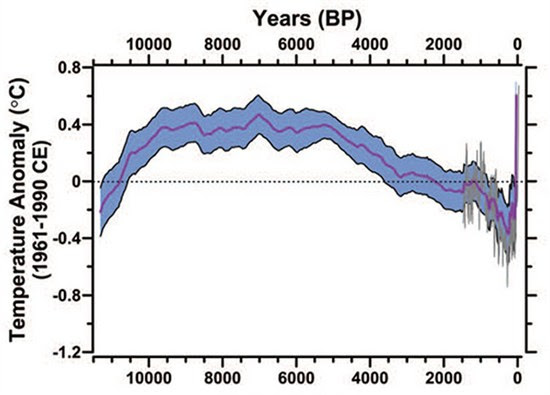 Global temperature reconstructed for the past 11,300 years by Marcott et al. (purple line) and for the past 2,000 years by Mann et al. (grey lines) Source: Skeptical Science
Marcott, S. A. et al., (2013) A Reconstruction of Regional and Global Temperature for the Past 11,300 Years. Science, DOI:10.1126/science.1228026
2.World's oceans are getting warmer, faster
A study led by UK researcher Magdalena Balmaseda highlighted why its important not to overlook the oceans when thinking about climate change.
Publishing in the journal Geophysical Research Letters, the authors showed just how much the oceans have warmed in the past 50 years - and that the pace accelerated sharply after about 2000.
The data suggests heat is finding its way to the deep ocean, rather than staying in the upper layer. That could be one reason for less surface warming in the last 15 years than in previous decades, suggested the authors. Lead author Kevin Trenberth told Carbon Brief:
"[The new study] means that the current hiatus in surface warming is transient and global warming has not gone away." 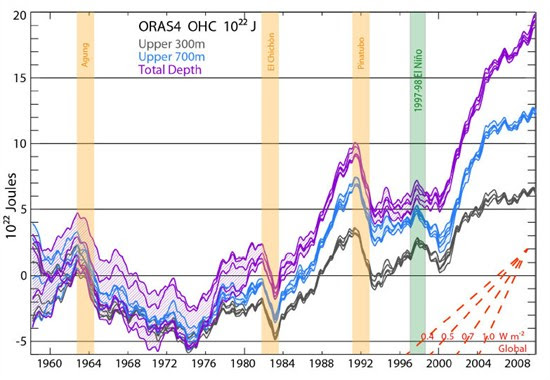 Amount of heat stored in the whole ocean in past five decades (purple), the top 700 m (blue) and just the top 300 m (grey). Source: Balmaseda et al., ( 2013)
The paper just missed the deadline for consideration in the recent IPCC report. But as a potential explanation for the so-called surface warming slowdown, the oceans still got a fair bit of media attention when the report finally came out in September.
Balmaseda, M. A., Trenberth, K. E. & Källén, E. (2013) Distinctive climate signals in reanalysis of global ocean heat content. Geophysical Research Letters,DOI:10/1002/grl.50382
3. Surface warming slowdown doesn't affect climate sensitivity, study says
This was the year climate sensitivity became a thing. The degree of earth's sensitivity to greenhouse gases is key to understanding climate change. This year, a particularly technical way to measure it made the leap from the quiet corridors of scientific institutes to the mainstream media.
The Economist brought the issue to the masses in April by suggesting slower than expected warming in recent years meant scientists were rethinking how sensitive the climate is.
But it was a case of mistranslation by the Economist and a paper by Alexander Otto a month later put paid to the idea. Climate sensitivity is pretty nuanced stuff, but the paper's gist was that recent sluggish surface temperatures have no bearing on the warming we can expect in the long term.
The authors' climate sensitivity estimate sat just below the likely range put forward by the IPCC. While not a conclusive argument for shifting the range altogether, Otto told us it might support lowering the bottom boundary a bit - and this is what happened when the IPCC released its report.
The authors' prediction for the next few decades caused a bit of a stir too. The prospect of less warming than previously thought - because heat is temporarily entering the oceans - prompted some commentators to jump to the conclusion that climate change no longer poses a problem.
Otto, A. et al., (2013) Energy budget constraints on climate response. Nature Geoscience,DOI:10.1038/ngeo1836

4. How likely is a huge Arctic methane pulse? We find disagreement among scientists
Rising temperatures in the Arctic could see 50 billion tonnes of methane currently frozen in the seabed released into the atmosphere over ten years, a Nature comment piece argued in July.
The paper's topline figure pricked the media's ears - that the climate change consequences of that amount of methane could cost a whopping $60 trillion.
Expressing the result of huge and sudden methane release as an economic cost is a new concept. But the study's novelty was eclipsed by scientists' criticisms that a 50 billion tonne pulse was "totally unjustified". Professor David Archer from the University of Chicago told Carbon Brief:
"No one has proposed any mechanism for releasing methane that wouldn't take centuries, not just a few years."
Dr Nafeez Ahmed, whose blog for the Guardian reported the research, later conceded the perils of attaching too much weight to one study, saying he hadn't realised the scenario was "speculative".
Whiteman, G., Hope, C. & Wadhams, P. (2013) Climate science: Vast costs of Arctic change. Nature Climate Change, DOI:10.1038/499401a

5. Not so slow "slowdown"? New paper says warming in last 15 years may be double what scientists thought

The so-called surface warming slowdown - and what may be driving it - has been quite amedia preoccupation in the past year - particularly in the run up to the IPCC report launch in September.
Research earlier in the year suggested natural cycles could be squirrelling heat away into the deep ocean. Cuts in CFCs under the Montreal Protocol could be contributing too, scientists suggested.
But a paper published in November shed new light on this much-discussed topic, suggesting temperature rise in the last decade and a half may be nothing unusual after all.
The authors said plugging well-known gaps in one of the major global datasets - particularly in the Arctic - brings the rate of warming since 1997 much more in line with previous decades. 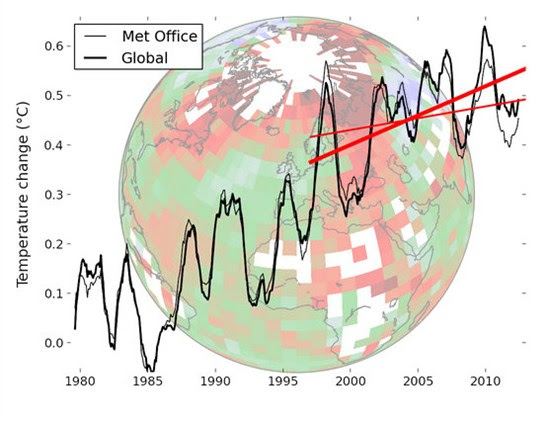 Warming after 1997 in the original temperature data (thin red line) compared to the updated data (thick red line). Source: Cowtan & Way (2013)
Coming on the heels of a year of heated speculation, the paper met with plenty of interestfrom climate scientists and skeptics alike.
So where does it leave the slowdown? This RealClimate blog does a good job of explaining how different explanations for slower warming fit together. The gist is there is still evidence for a slowdown, but the magnitude may not be as great as previously thought.
This won't be the last word on the slowdown, warn the authors. Lead author Kevin Cowtan had another salient point to make, looking at short time periods "has dominated the public discourse but is in our view a misleading approach to evaluating climate science."
Cowtan, K. & Way, R.G. (2013) Coverage bias in the HadCRUT4 temperature series and its impact on recent temperature trends. Quarterly Journal of the Royal Meteorological Society,DOI: 10.1002/qj.2297