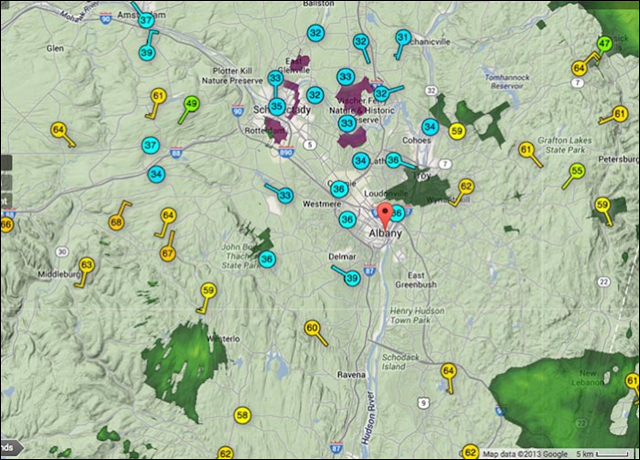 (Reuters) – A band of severe weather from tornadoes to icy blasts left at least seven people dead as winter storms and severe weather pushed up the East Coast on Sunday, bringing record high temperatures to Philadelphia and New York City but ice storms to parts of New England.

The eastern half of the country was getting a "plethora of winter weather" just days before the Christmas holiday, according to the National Weather Service.

"This storm is bringing a little bit of everything, from rain, flooding and wind, to ice and snow in some areas," said NWS meteorologist Bruce Sullivan. "What is really extraordinary about this system, though, is the warm air."

The system is expected to linger over the East Coast until Monday, snarling road and airline travel for millions of people during one of the busiest travel periods of the year. Major airports in Philadelphia and New York City were experiencing delays Sunday because of wind and visibility, according to the Federal Aviation Administration.

Hundreds of flights across the United States were canceled on Sunday, according to the aviation tracking site, FlightAware.com flight website.

In Washington D.C., the temperature was hovering "about 40 degrees warmer than normal," Sullivan added.

Farther north, in upstate New York, Vermont, New Hampshire and Maine were pummeled by an ice storm after the warm air hit an arctic layer, he said. [more]

(wunderground.com) – The large and complex winter storm system designated ‘Gemini” by The Weather Channel has loosened its grip over the U.S. following three days of wild weather. Most impressive were the rain totals and warmth that proceeded the storms frontal passage across the central and eastern portions of the country. Here is a brief summary of some of the highlights.

A plume of moisture ahead of the storm’s cold front reached near record values so far as precipitable content is concerned.

This was manifested by some extraordinary rainfall totals. Flooding killed five in Kentucky where Paducah experienced its greatest December calendar day rainfall on record. Here were the top figures by state:

Jacksonville, Florida: 84° on 1/22 (ties 9 other occasions—including twice before this month)

SOME OF THE DAILY RECORDS SET ON DECEMBER 21 or 22

One aspect that was interesting was how cold air was trapped in the valleys of New York as warm air just aloft caused temperatures to vary buy as much as 35° over an elevation of just 500-1000’. [more]

Posted by seemorerocks at 21:53