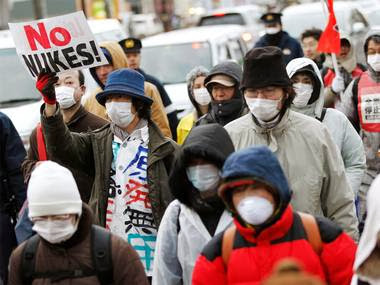 But almost three years later, pro-nuclear officials, business leaders and utilities wielding awesome economic and political clout are regaining strength and maneuvering to tighten the noose around local government leaders who have been demanding that Japan do away with nuclear power.

One example is the way the recent mayoral race in Tokai, Ibaraki Prefecture, played out. Tokai is home to the Tokai nuclear power plant, the nation’s first nuclear plant, and the Tokai No. 2 plant, along with related facilities.

The LDP has championed nuclear power for decades and is eager to get the nation’s reactors back online, arguing that this clean source of energy is indispensable to propping up the economy.

The DPJ, on the other hand, has been promoting a nuclear phaseout by the end of 2039. However, many DPJ members in local chapters are not on board, as became clear in the Tokai mayoral race.

Yamada won a landslide against his opponent, who was supported by the Japanese Communist Party and ran on the platform of pulling the plug on nuclear power.

Yamada’s victory was a bitter irony to his predecessor, Tatsuya Murakami. Murakami played a prominent role in efforts by local leaders around the nation to advance the idea of a nuclear phaseout through a network called “Mayors for a Nuclear Power Free Japan,” which was first organized in 2012.

Two months before the mayoral election, Murakami, who had served four terms since 1997, announced that he would not seek re-election.

Murakami became deeply skeptical of nuclear power after an accident at a fuel processing facility in Tokai village operated by JCO Co. in 1999, which resulted in the deaths of two people.

Fast-forward to the accident at the Fukushima No. 1 nuclear power plant in March 2011. The disaster convinced Murakami that the Tokai No. 2 nuclear plant should be decommissioned, and he was very outspoken on the subject.

Murakami warned that the Tokai No. 2 plant would have met the same fate as the crippled Fukushima No. 1 plant--complete loss of power after the Great East Japan Earthquake and tsunami--if it had been engulfed by a tsunami just a little higher than that for which it was prepared.

The tsunami that struck the Tokai No. 2 plant in March 2011 was estimated at 5.4 meters. The plant's breakwater structure is 6.1 meters high.

As Japan’s oldest nuclear power plant, the Tokai plant first went online in 1966. It ended its service in 1998. It is currently in the process of decommissioning. Japan Atomic Power Co. owns both Tokai plants.

Murakami’s growing call for mothballing the Tokai No. 2 plant alarmed Kenjiro Shimoji, a member of the Ibaraki prefectural assembly and whose constituency includes Tokai, along with six pro-nuclear members of the village assembly.

They criticized Murakami, saying he had not listened to the viewpoints of others and ignored the fact that those who work in nuclear facilities in the village have contributed to the community’s well-being.

They also blasted Murakami for championing a nuclear phaseout after the village saw a steep decline in sales at convenience stores and hotels due to the suspension of operations at the Tokai No. 2 nuclear power plant after the Fukushima crisis.

Shimoji has strong ties with the nuclear industry.

Before he won his first seat in the prefectural assembly in 2010, Shimoji had served as an aide to Hiroshi Kajiyama, an LDP lawmaker in the Lower House who hails from a local electoral district including Tokai.

Kajiyama previously worked for the predecessor of the government-affiliated Japan Atomic Energy Agency, which operates research facilities in Tokai. Pro-nuclear members of the village assembly are backed by companies in the nuclear industry.

Although one of those described Murakami as “leaning too far for a break with nuclear power,” many villagers sided with Murakami on his cautious approach to nuclear power in the races prior to the September vote.

The pro-nuclear bloc considered the recent Tokai mayoral election as one they could not afford to lose. They moved fast to select a candidate who was not averse to the continuation of nuclear power generation.

Several months before the election, Shimoji and the six village assembly members invited Yamada to a dinner to determine his stance on nuclear power.

“I am not anti-nuclear power,” Yamada told the politicians.

Kajiyama and Shimoji plotted to gain support for Yamada from villagers in Tokai who commute to the neighboring city of Hitachi to work for engineering and electronics giant Hitachi Ltd.

Both politicians agreed that Akihiro Ohata, DPJ secretary-general and a member of the Lower House, would be the right person to do the job of rallying the support of Hitachi employees. Before becoming a politician, Ohata served as an official with Hitachi’s labor union.

“Kajiyama contacted Ohata last year and they decided they should pick a candidate who could cooperate with them on the matter and thereby maintain the status quo at the village,” Shimoji said.

In the spring, Shimoji began talking Yamada about entering the race for mayor.

Murakami was not invited to the pre-election rally held on Aug. 30 by the joint team of LDP and DPJ supporters who sit on Yamada’s election staff.

In an interview with The Asahi Shimbun, Yamada said he decided to run to prevent a division in the village.

“The issue of nuclear power is important, but we also have other issues to look at in terms of the development of the village,” he said.

Unlike Murakami, Yamada has no intention to join the Mayors for a Nuclear Power Free Japan network.

He said nobody should be able to stop reactor restarts as long as all safety issues are confirmed by the Nuclear Regulation Authority and local governments hosting the facilities give the green light to restarts.

However, Yamada said that does not mean he will approve the resumption of the Tokai No. 2 plant.

“I have listened to what my predecessor thinks on this issue, and I need to take into account how people in municipalities surrounding Tokai stand on this,” Yamada said. “I don’t want others to quickly assume that the wind has now shifted (with my taking office).”

Power utilities, which have stable revenue from electricity rates under a regional monopoly system, are also dominating players in regional economies. Regional business federations have often been headed by top executives of power utilities.

“We are posting daily deficits of 1 billion yen ($9.6 million) (from our idled nuclear reactors),” Matsuo said during an opening ceremony for a cancer treatment facility in Saga Prefecture in May. “It would be no big matter if only we could restart (our reactors) four days earlier.”

Matsuo was referring to the 4 billion yen in promised, but unfulfilled, donations by Kyushu Electric to help build the Saga Heavy Ion Medical Accelerator in Tosu, which is subsidized by the governments of Saga and Fukuoka prefectures. He was sending a clear message that Kyushu Electric would make good on its promise only if it was allowed to restart its offline nuclear reactors.

Kyushu Electric donated 300 million yen of the promised 4 billion yen at the end of fiscal 2011, but put the rest on hold because of a downturn in its bottom line. That stemmed from the fact that all its nuclear reactors were shut down after the Fukushima nuclear disaster began to unfold.

Matsuo’s remarks were perceived as a sign of arrogance on the part of the electric power industry and sparked an uproar. He was later forced to apologize after a protest by the Saga prefectural assembly.

Elsewhere, on the political scene, Shiga Prefecture Governor Yukiko Kada said she realized the enormous clout of the electric power industry when two reactors were reactivated at the Oi nuclear power plant in neighboring Fukui Prefecture in summer 2012.

Kada said her resistance to the restarts was tamped down by pressure that came from all sides.

Local industry had been cooperative in Shiga Prefecture’s power-saving initiative in 2011, but made an about-face the next year and pressed the governor by asking if the prefectural government could “provide its own supply of electric power.” She was hard-pressed to ignore the opinions of manufacturing plants, which abound in Shiga Prefecture.

“They had probably been given various explanations (by Kansai Electric Power Co., operator of the Oi nuclear plant),” Kada said. “I realized a governor’s authority did not account for much in the face of a power utility.”

Kada is currently worried about the chances of re-election for a fellow governor, Hirohiko Izumida of Niigata Prefecture, who remains cautious about approving the restart of a nuclear plant in his own prefecture.

“The power industry is so influential that nobody can antagonize it and still be elected,” Kada said.

Izumida is little different from many of his fellow governors in that he counts local business circles among his core power bases. His election committee is headed by Eiichi Tsurui, president of Hokuriku Gas Co. and former head of the Niigata Chamber of Commerce and Industry.

Communities in Niigata Prefecture that used to rely on the Kashiwazaki-Kariwa nuclear power plant for their livelihoods are stepping up moves to seek restarts of reactors there.

In July this year, Toshihiko Maruyama, a member and former chairman of the Kashiwazaki city assembly, saw representatives of other parts of Japan hosting nuclear plants push openly for reactor restarts in their own communities. Maruyama was attending a council meeting in the capacity of an adviser to a union of assembly heads from municipalities hosting nuclear plants.

“Why don’t we push for restarts at Kashiwazaki-Kariwa?” Maruyama told Kazumi Sato, chairman of the Kariwa village assembly, during the meeting.

That overture resulted in the Nov. 20 creation of the Kashiwazaki-Kariwa study group on a future energy community, which organized about 100 members of local commerce and industry. The group is pushing for a restart of the nuclear plant, where all seven reactors have remained idle since March 2012.

“Several thousand jobs have been lost because of the idle reactors,” Maruyama said. “So many livelihoods have been wiped away from our community. The local economy is only withering.”

Maruyama denied that Tokyo Electric Power Co., operator of the Kashiwazaki-Kariwa plant, is behind the creation of the study group. But the group does present an antithesis to Izumida, who has not backed down in his face-off with TEPCO as the utility has sought to have the No. 6, No. 7 and other reactors reactivated at the Kashiwazaki-Kariwa plant.

“We are not exactly applying pressure,” Maruyama said. “This is our way of expressing our views to our governor.”

A separate consortium of companies in the nuclear power sector in Niigata Prefecture also held a lecture session in Kashiwazaki in September to promote the use of nuclear energy to revitalize the regional economy.

“I am planning to use an extra budget to provide aid to offset ramifications of the long-lasting hiatus of the nuclear plant,” Izumida said in a message to The Asahi Shimbun, which requested an interview. “I will do my utmost to block corporate bankruptcies and job losses.”

Posted by seemorerocks at 14:48