Seismic activity in the US 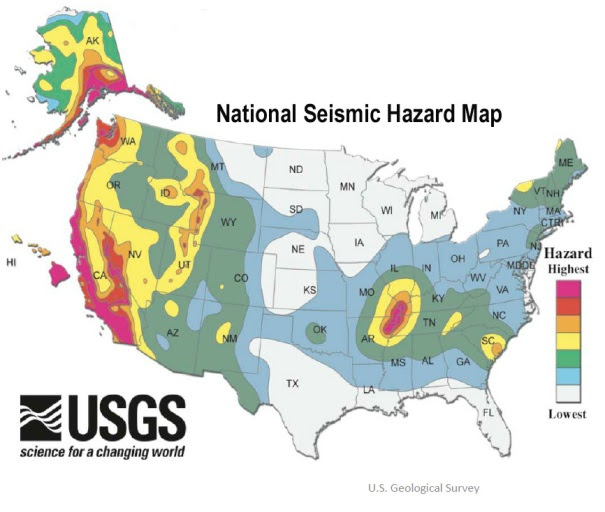 The Kansas Geological Society is investigating whether a recent earthquake in southern Kansas might have been caused by oil production practices in the area. But KGS interim director Rex Buchanan said it might be difficult to determine if the 3.8 earthquake on Dec. 16 near Caldwell was man-made or caused by natural forces. No evidence has been found yet to suggest hydraulic fracturing caused the quake, said Buchanan. It’s more common for minor quakes near oil production sites to be caused by the disposal of salt water waste, The Lawrence Journal-World reported. “There’s a lot of saltwater produced with oil,” he said. “Once you separate that off, you need to dispose of it. In Kansas, that’s done in wells deep in the subsurface. There is production and disposal wells in the general vicinity around there.” The Kansas Corporation Commission, which regulates oil and gas production in the state, is also investigating the issue. “It is important to point out that Kansas has a long history of oil production with very few reported incidents of any kind,” KCC spokesman Jesse Borjon said in an email to the newspaper. “The KCC is looking into the issue of seismic activity as it relates to oil and gas activities. We have been in communication with the Kansas Geological (Survey) and continue to gather information.” It’s possible the earthquake was entirely natural, Buchanan said. -LJW

Kentucky Emergency Management is reporting that a 2.3 magnitude earthquake was felt near Owingsville around 5:58am Monday. The USGS reports that the disturbance was centered near the Sharpsburg area. Many viewers report feeling the tremors throughout parts of Central Kentucky. Officials report that this type of event is relatively minor. – WKYT

Perhaps we should write a story when there’s not an earthquake near Azle. For the 14th and 15th time in the last 30 days, people who live northwest of Fort Worth have felt the earth rumble. The latest incident, a 3.3-magnitude quake, was recorded by the U.S. Geological Survey at 7:11 a.m. Monday four miles northwest of Azle just off of S. Reno Rd. There was also an earthquake at 11:31 a.m. Sunday. It also registered as a 3.3-magnitude, according to the USGS. It was centered two miles northwest of Azle, just north of Willow Wood Drive. “Shook my bed and made the walls creak,” wrote Azle resident Kim Johnson, who was upstairs in a two-story home. “We now have a few cracks in our vaulted ceilings upstairs. When will it end?” Writing on the WFAA Facebook page, Sandra Tingle said she’s worried about liability. “My insurance company told me unless a fault line is determined to be under your property, it’s not covered,” she said. Sunday’s tremor is the fourth-strongest in the past month. The most powerful registered 3.7-magnitude and struck 30 miles west of Azle on December 9. -KHOU

A shallow magnitude 4.7 earthquake was reported Monday morning 31 miles from Lone Pine, Calif., according to the U.S. Geological Survey. The temblor occurred at 5:39 a.m. PST near the surface. According to the USGS, the epicenter was 41 miles from Ridgecrest, 53 miles from Porterville and 57 miles from Lindsay. In the past 10 days, there have been no earthquakes magnitude 3.0 or greater centered nearby. –LA Times

Posted by seemorerocks at 21:43