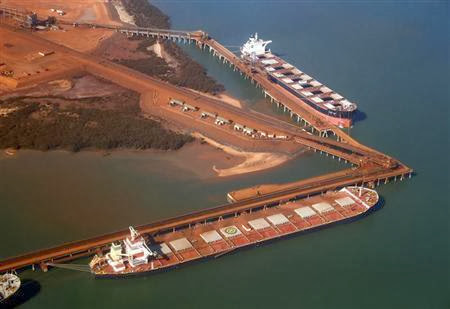 PERTH, Australia (Reuters) - Ports in Australia's Pilbara region, through which almost half of the world's seaborne iron ore is shipped, were sending ships out to sea on Saturday ahead of a tropical cyclone that is forecast to reach the coast by Tuesday.

The last of more than 40 vessels in the anchorages and harbor at Port Hedland are expected to leave by the early hours of Sunday, port spokesman Steed Farrell told Reuters.

It is considered safer for ships to ride out storms at sea rather than in port.

Ships were also moving out to sea from Dampier port, through which both iron ore and gas from the north-west shelf is shipped. Port Authority acting chief executive Paul Toussaint-Jackson told Reuters that the port would "probably" move to full closure by Sunday afternoon.

The Australian Bureau of Meteorology said the storm, a Category 1 cyclone named Christine, was estimated to be 570 km (355 miles) north, northeast of Port Hedland and moving southwest, parallel to the coast, at 12 km (7 miles) per hour on Saturday evening.

"If Christine continues to develop as expected a severe tropical cyclone impact on the Pilbara is likely on Monday and Tuesday morning," the bureau said.

The three ports handle more than 500 million tonnes of iron ore annually, accounting for almost all of Australia's exports.

Cyclone Christine is the latest to form off Australia's far northern Indian Ocean coastline and threatens to bring mining and oil and gas production to a standstill.

Iron ore exports from Port Hedland were 28.1 million tonnes in November, just off October's all-time peak of 29.0 million and 29 percent higher than in November last year.

The majority of the ore is shipped under contract to steel mills in China.

Australia's cyclone season usually runs from November1 to April 30, with up to 11 storms, according to forecasters.