US Department of Defense responds to climate change

The US military is not sleeping on the job

DOD Wraps Climate Change Response into Master Plans
WASHINGTON, Nov. 26, 2013 – The effects of climate change are already evident at Defense Department installations in the United States and overseas, and DOD expects climate change to challenge its ability to fulfill its mission in the future, according to the first DOD Climate Change Adaptation Roadmap. 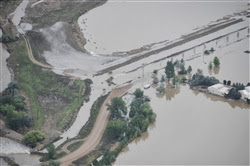 John Conger, the acting deputy undersecretary of defense for installations and environment told American Forces Press Service the roadmap was completed in 2012 and published early this year.

The document “had us do a variety of things,” Conger said. “But the piece that I think is the crux of the report is, rather than creating a stovepipe within the DOD organizational structure to deal with climate change, [the document says] we are going to integrate climate change considerations into the normal processes, the day-to-day jobs of everybody.”

Such language is going to be integrated into various guidance documents, he added, “and we’ve already started doing that.”

Across the United States, local communities and cities are updating building codes, adjusting the way they manage natural resources, investing in more resilient infrastructure and planning for rapid recovery from damage that could occur due to climate change.

And on Nov. 1, the president issued an executive order on climate preparedness directing federal agencies to modernize programs to support climate-resilient investments, manage lands and waters for climate change preparedness and resilience, and plan for climate-change-related risk, among other things.

The order also forms an interagency council on climate preparedness and resilience, chaired by the White House and composed of more than 25 agencies, including the Defense Department.

The foundation for DOD’s strategic policy on climate change began with the defense secretary’s publication in 2010 of the Quadrennial Defense Review. The QDR, produced every four years, translates the National Defense Strategy into policies and initiatives.

In 2010, the QDR for the first time linked climate change and national security. It said climate change may affect DOD by shaping the department’s operating environments, roles and missions, have significant geopolitical impacts worldwide, and accelerate instability or conflict.

The QDR said DOD also would have to adjust to climate change impacts on its facilities, infrastructure, training and testing activities and military capabilities.
As the acting deputy undersecretary of defense for installations and environment, Conger also is the department’s senior climate official, and his first job is to manage the installations and environment portfolio.

“That includes over 500 bases and 300,000 buildings and 2.2 billion square feet of space,” he said. “The infrastructure has a plant replacement value on the order of $850 billion. There’s a lot of stuff out there that is all going to be impacted by changes in the climate.”

Conger said the department has to plan for the contingencies that climate change poses just as it would plan for any other contingency, driven by any other force in the world.

“As I look at managing the infrastructure, I have to think about risk as well in that context,” he said. “What is climate change likely to do? What are the major changes that will occur that will affect that $850 billion real property portfolio?”

The obvious threats are things like a rise in sea-levels, storm surges and storm intensity, but there’s also drought and thawing permafrost that affects bases in Alaska, the deputy undersecretary added.

“Similarly, on our installations we have over 400 endangered species,” he said. “We manage those species through documents called integrated natural resources management plans and we manage [them] not through some degree of altruism … but the fact is that if we don’t manage those species effectively and they do appear more threatened, then other regulatory agencies will put limits on what we can do on our property and that will impact training.”

“These are all, in my mind, sensible, reasonable steps that don’t cost very much money today and just require a little bit of forethought in order to reduce our exposure to risk tomorrow.”

DOD has been looking at mitigation, or the energy problem, for a long time, the deputy undersecretary added.

Conger says the department’s $4 billion annual utility bill drives the search for energy-efficiency, renewable-energy development projects and more. All have benefits from a mission perspective first, he said, and also turn out to be good for the environment.
Posted by seemorerocks at 12:23