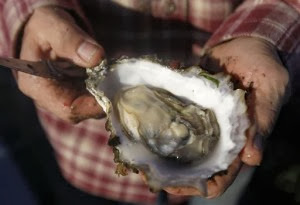 In New Jersey, Rutgers scientists have documented for 24 years how climate change is affecting the state’s oceans through weekly fish surveys. The researchers are finding fewer and fewer northern species and more and more southern species — fish like the Atlantic croaker, which historically have rarely ventured into the cool waters surrounding New Jersey. Mackerel and clams, which were once common, are now moving north, forcing fisherman to reevaluate what they fish for.

“As far as fishermen are concerned, climate change is here. This is a reality,” Tom Fote, of the Jersey Coast Anglers Association, told the Philadelphia Inquirer. “We’re going to have to change the way we fish.”

And it’s not just in New Jersey. Off the coast of Oregon, ocean acidification and hypoxia — a depletion in the ocean’s oxygen which can cause dead zones — are two of the biggest problems facing the region’s ocean ecosystems. Both are linked to climate change: the ocean absorbs about 30 to 40 percent of the atmosphere’s excess carbon, causing its pH to drop, and one study found hypoxia tends to increase as temperatures rise. Particularly off the coast of Oregon, where hypoxia began occurring in 2002 and anoxia — an area with zero oxygen — first emerged in 2006, more evidence is pointing to climate change as a likely culprit of the patches of depleted oxygen.

These effects are causing trouble for Oregon fishermen. Rising water temperatures and ocean acidification are causing jellyfish populations to increase off the coast of Oregon (and also around the world), disrupting the ocean ecosystem and clogging fishermen’s nets.

“Sometimes we’ll catch 4,000 or 5,000 pounds of jellyfish. They spray all around. We get stung,” fisherman Ryan Rogers told the Register-Guard. “It makes it difficult to bring your net in. You have to let it go and lose the salmon that are in your net.”

Another Oregon crabber related his experience with what may have been a dead zone in 2005 to the Register-Guard, saying he saw baby octopuses climbing up his crab line to escape the water. When he pulled up his crab trap, all the crabs were dead.

These anecdotes relay the danger climate change poses to oceans — as well as the fishing industry — and back up the findings of previous studies. This month, a study published in the journal Science found 70 percent of marine creatures’ shifts in depth — and 74 percent of their shifts in latitude — were linked to changes in ocean temperature. Studies have found that higher acidity can affect fish’s brains — clown fish tend to swim farther from their protective anemones in acidic water, making them vulnerable to predators, and hermit crabs take longer to withdraw into their shells at the sight of a predator in acidic waters. An increase in jellyfish could seriously damage the marine food chain, since the gelatinous creatures eat large quantities of plankton, a key food source of many fish and whales. And ocean acidification is a major threat to shellfish around the world, as it can impair their ability to grow shells.

In August, Oregon Gov. John Kitzhaber appointed five Oregon State University scientists to study the causes and effects of ocean acidification, and how this phenomenon is changing the Pacific coast. But though more research is helpful, solutions are hard to come by. One scientist is studying whether pumping naturalizers into the ocean can help coral reefs survive in increasingly acidic waters, but right now, the only way ocean acidification can be alleviated is by reducing carbon emissions.