Extreme weather in US for Christmas

'Perfect storm’ of foul weather kills 9 across US
Heavy snowfalls, ice storms, ruinous tornadoes and flash floods are creating havoc during the holiday season across the US. At least nine people died 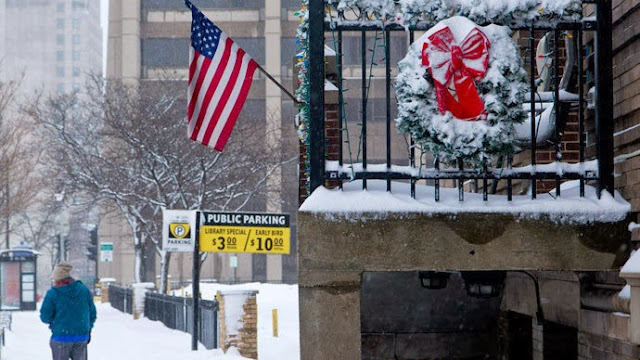 in a deluge of bad weather that caused massive flight delays and knocked out power.

"This is a particularly strong storm with very warm, near record-breaking temperatures in the East and very cold air in the Midwest, and that contrast is the sort of conditions that are favorable for not only winter weather but also tornadoes," National Weather Service meteorologist Ed Danaher said in College Park, Maryland.

At least nine people were reported killed in storms, according to AP. Among the victims are five people who died in flooding caused by storms in Kentucky and a woman killed in a tornado in Arkansas. Three deaths were also reported in Oklahoma.
Over 440,000 homes and businesses were deprived of power due to snow and ice in Michigan (300,000), upstate New York and northern New England (100,000). It could be several days before power is fully restored to many households.
More than 700 airline flights were canceled Sunday evening, and more than 11,000 delayed, reports aviation tracking website FlightAware.com. Meanwhile, major international airports in Philadelphia, New York City and Chicago delayed many flights because of wind and poor air conditions, the Federal Aviation Administration said. 
In Arkansas, a heavy tornado with strong winds struck the state Saturday, damaging several homes and downing power lines. One woman died in the storm and five were injured.
Central Plains, including Kansas and Nebraska, were hit with colder-than-usual temperatures. Ice and snow in Oklahoma caused three traffic deaths on slippery roads.
On Saturday, a series of thunderstorms stretched from southern Louisiana to Indiana, causing rivers and creeks to swell, flooding roads and spawning winds strong enough to force cars and trucks off of highways. Heavy rains, damaging winds and lightning continued in Georgia, South Carolina and up the East Coast. However, while the Great Lakes, New England, South and the Midwest were hit by ice, high winds and flooding, the mid-Atlantic saw record-breaking warm temperatures because of a mass of hot, muggy air from the South.

Temperatures of 21 degrees Celsius were recorded in New York's Central Park. High temperatures were also recorded in Atlantic City, New Jersey, (20 degrees C) and Philadelphia (19 degrees C).
Washington DC had highs of 22 degrees C, "about 5 degrees warmer than normal," NWS meteorologist Bruce Sullivan said.
"This storm is bringing a little bit of everything, from rain, flooding and wind, to ice and snow in some areas," Sullivan said. "What is really extraordinary about this system, though, is the warm air."

In neighboring Canada, huge winter storms swept across the country, too, damaging power lines and causing mayhem for travelers.