The Christmas misery faced by the thousands of people across Britain left without power in the wake of the stormy weather may continue through the week.

The power outages come as scores of people had to be evacuated due to flooding, following a number of deaths, thought to be related to the bad weather, in the run-up to Christmas.

Just under 50,000 homes across the UK are still without power, Tim Field of the Energy Networks Association said, adding: "It's likely that some people will still be off on Boxing Day (today). We don't have exact numbers."

UK Power Networks said there were about 23,379 households in the south-east without power.

However, the company added: "Due to the severity of the storm damage in Kent, Surrey and Sussex, it may take until the end of the week to restore power supplies to the final pockets of customers in these areas."

With many families' turkey dinner ruined, the power firm made arrangements for "hundreds" of people left without power to have Christmas dinner.

The Environment Agency (EA) has two severe warnings in place in the south-west -- the highest level of alert, which means there is a danger to life, at Beaulieu Garden Park Home Site in Christchurch, Dorset, and Iford Bridge Home Park, near Bournemouth, where evacuations have taken place.

There are 104 flood warnings and 193 flood alerts. 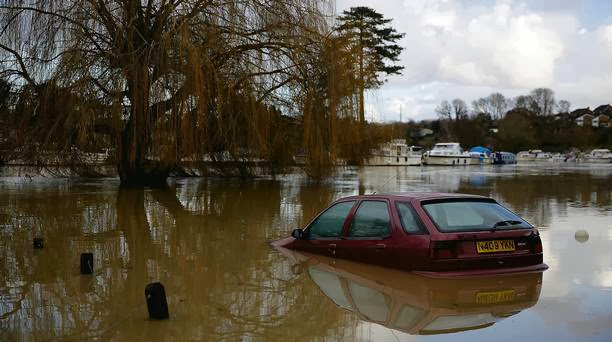 Firefighters broke their strike in parts of England because of the storms.

Members of the Fire Brigades Union in Surrey and Kent were recalled to duty under the terms of an agreement between the union, the employers and the Government.

In the early hours, around 90 people were evacuated from their homes on the River Stour. Police began to evacuate residents of the Iford Bridge Home Park shortly after 3am following a severe flood warning.

Resident Pat Tapply (79) said a boat had come to rescue them.

The coastguard joined Kent Fire and Rescue Service to rescue people from the Little Venice Caravan and Marina Park in Yalding after rising waters from the River Medway cut them off. The EA said that by last night 150 properties had been flooded in England, mainly in the south and focused in Surrey and Kent.