Minoru Tanaka, a 52-year-old Japanese freelancer who has written many investigative pieces about the nuclear power industry, is being sued for 67 million yen (600,000 euros) – an enormous sum he would never be able to pay – over a story that looked at the connections between nuclear industry figures, investors and politicians. 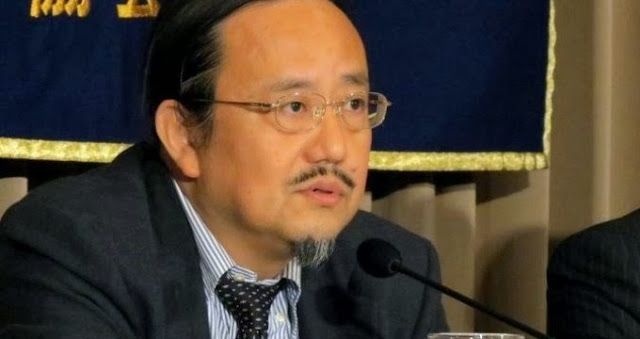 
Published in the 16 December 2011 issue of the weekly Shukan Kinyobi and indiscreetly headlined "The last big fixer, Shiro Shirakawa, gets his share of the TEPCO nuclear cake," the article tried to shed light on Japan’s opaque nuclear industrial complex, known as the “nuclear village,” and in particular, the activities of Shiro Shirakawa, the head of a company the provides security systems for power stations owned by the electricity utility TEPCO.
The article accused Shirakawa of taking advantage of his connections with key nuclear industry figures, including TEPCO’s former chairman, and politicians such as the parliamentarian Kamei Shizuka to obtain unjustified profits since the Fukushima Daiichi nuclear disaster in March 2011.
Most freelance and foreign journalists regard the libel suit that Shirakawa brought against Tanaka (but not against Shukan Kinyobi) as a bid to deter all journalists from doing investigative reporting about the nuclear industry and, in particular, about the way that the Fukushima Daiichi accident was handled.
When the Foreign Correspondents’ Club of Japan organized a news conference in Tokyo on 31 August 2012 to give Tanaka a chance to talk about the lawsuit, not a single journalist from Japan’s official Kisha press clubs attended. Freelancers are discriminated against in Japan and excluded from the Kisha clubs. As a result, Tanaka’s freelance status prevents him from receiving the support of his colleagues and increases his vulnerability.
Freelance and independent journalists such as Yu Terasawa, Michiyoshi Hatakeyama, Yuichi Sato and Ryuichi Hirokawa are often harassed over their nuclear industry reporting. Like TEPCO and the nuclear industry in general, the government seems to fear that coverage of the Fukushima aftermath and public discontent could result in their being blamed and lead to a national debate about energy issues in Japan.
Before a Tokyo court began hearing the lawsuit on 7 May 2012, Shirakawa sent Tanaka a letter warning that he would be rendered insolvent if the court rules against him. Several hearings have been heard since then and they are steadily wearing Tanaka down.
In Tanaka’s view, the case has all the hallmarks of what is often called a Strategic Lawsuit Against Public Participation (SLAPP) or “gag suit,” with a powerful plaintiff who has many political and business connections, on the one hand, and an isolated journalist, on the other. 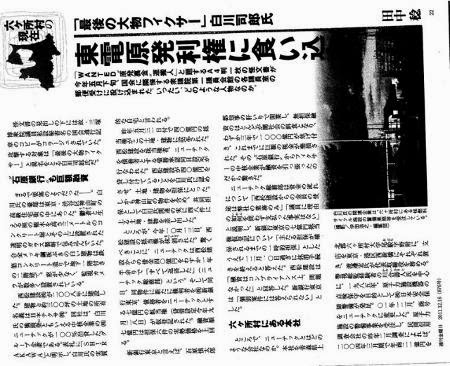 The last big fixer, Shiro Shirakawa, gets his share of the TEPCO nuclear cake published in the 16 December 2011 issue of the weekly Shukan Kinyobi. Download the full article (pdf).

A mystery letter (怪文書) was distributed at the House of Representative Building 1 towards the end of May in 2011. It was titled, “WANTED: The Transporter of Nuclear Industry Bribes” and printed on A4 sized paper. Who the heck is the person it was written about? Under the headline of the mystery letter was a copy of the ID badge of the deceased 三塚博衆院議員（Mitsuka Hiroshi-LDP)’s personal secretary, in a collage. The person being criticized in the letter was a man called  “The Last Big Fixer” aka Shirakawa Shiro.

Minoru Tanaka explains his story and how publishing it on WeFightcensorship can help him as a journalist during the press conference organised by RSF.
Posted by seemorerocks at 18:30