“Traceable radiation from Chernobyl circled the Northern Hemisphere twice, pretty much giving everywhere a taste. Fukushima is orders of magnitude worse, it has been going on for almost three years and the Japanese have never stopped incinerating radioactive waste on a daily basis, right into the Jet Stream.”
----Mimi German]
New model shows U.S. hit by Fukushima cloud that dispersed little over Pacific

Uncertainty in Simulation of Global Transport of Radioactive Tracer Emitted from Fukushima Daiichi Nuclear Power Plant, Studies on the 2011 Off the Pacific Coast of Tohoku Earthquake, 2014: 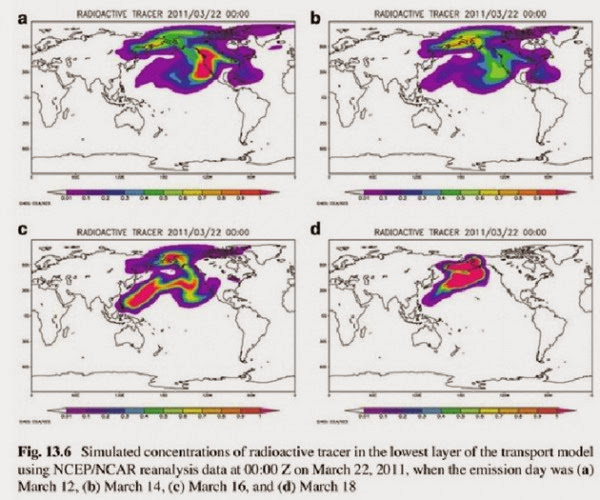 From Portland on the south, to Vancouver on the north, there was significant hot particles deposited locally.
One of the scientists we work with had air filters, continuous air monitors, set up in Seattle and we could clearly show that the average person in Seattle was ingesting about 10 hot particles a day into their lungs.
No matter what you do you can’t get that out, the particle size was such that once you breathed it in, it lodged in your lung […]
What people in Seattle could have done were to put air masks on, but of course by the time we got that data and analyzed it,
it was May and the worst of the cloud had already passed. The authorities did know about it though.
I’m absolutely convinced that authorities did know about it and chose to keep us all in the dark.
There was a case up in Seattle where the government announced that it was going to be flying helicopters up and down the coast all the way through the Seattle area.
They said they were doing background radiation monitoring, and it was just purely coincidence that they were doing it just 90 days after Fukushima Daiichi.
I don’t believe that. I think that those helicopters were looking for hot particles and we were not told the outcome of those helicopter surveys. They said it was a national security secret. So authorities did know and didn’t warn us [...]

Here are some pertinent comments on this from M.G


"From Portland on the south, to Vancouver on the north, there was significant hot particles deposited locally. One of the scientists we work with had air filters, continuous air monitors, set up in Seattle and we could clearly show that the average person in Seattle was ingesting about 10 hot particles a day into their lungs." - Arnie Gunderson (on conditions in late March 2011)

One has to wonder why it took Gunderson nearly three years to make this fact known. For now, however, let's table that discussion.

People often think Seattle is on the Pacific coast but it is nowhere near the ocean. It's 130 miles away, as the crow flies. Between it and the Pacific is a huge Olympic Peninsula and some pretty tall mountain ranges. My point is that this plume wasn't associated with coastal-anything, not really, and this mass of air containing particles of cesium and plutonium did not stop at the Pacific coast but just kept going eastward, over the Cascades and into the heartland, where it also tainted our food supply.

It is also being tainted by the radioactive fish that the FDA isn't monitoring - on orders from Obama, certainly - but which is turned into fertilizer. Think about that for a moment. I myself live just miles from Seattle, as do a lot of other people, but the government didn't care about doing anything but maintaining the illusion that we're safe, much like our warm and furry Christmas eve tonight, so that we continue to buy things.

There is no escaping the fact that the American government has betrayed us repeatedly. Its behavior has been murderous. The question is: Where is our collective outrage? Oh, I know that we lefties feel it but we make up less than 5% of the population. Meanwhile, everyone else is being slaughtered by the government, and no one raises an eyebrow.