The Cass County Sheriff's Office is strongly recommending an evacuation of the entire City of Casselton and anyone residing five miles to the south and east of Casselton, effective immediately.

Information from the National Weather Service indicates a shift in the weather resulting in a high pressure system that will push the plume of smoke down increasing the risk of potential health hazards.

Those in the areas south and east of Casselton are also encouraged to consider evacuating, specifically Durbin Township and Everest Township east of ND State Highway 18.

Those evacuated should go to a safe location until further notice. If evacuees need a place to go, the Red Cross and Salvation Army have organized a shelter at Discovery Middle School, 1717 40th Ave S, in Fargo.

If children are located by emergency responders they will be brought to Central Cass High School for reunification with a guardian.

If transportation is needed from your home, contact the Cass County Tactical Operations Center at (701) 297-6000.

This evacuation is precautionary and in anticipation of potential changes in wind direction. Those within the evacuation zone are not currently in immediate danger but the potential exists if the wind changes direction.

Cass County Sheriff's Deputies and Casselton Fire Fighters will be going door to door in the evacuation zone to inform and assist those who reside in that area.

The shelter at Discovery Middle School will be opened by 6:30 p.m. Monday night. Anyone coming to the shelter should enter through west gymnasium doors.

The Red Cross is preparing to take in 100 people at the shelter, but have the capacity to hold up to 500. The shelter will be equipped with cots, food, and other necessary items for families displaced.

A Red Cross disaster mental health professional is also being deployed to the shelter to provide emotional support.

From the Cass County Sheriff's Office: A 104 car BNSF Train collided with another train while traveling eastbound approximately one mile west of Casselton, ND. How the collision occurred is unknown at this time.

The east bound train was carrying crude oil. Approximately 10 cars are fully engulfed resulting in heavy smoke in the area. Casselton Fire and the Fargo HazMat Team are currently battling the fire.

This is a HazMat incident. All people and animals within a 10 mile radius of Casselton, ND should find shelter and avoid going outside until the incident and area are deemed safe. 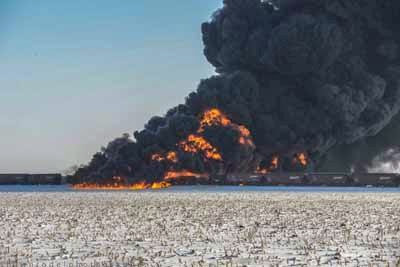 No injuries have been reported so far. Several area emergency teams are on scene and are setting up an incident command center. The Cass County Sheriff's Office says a train went off the tracks and a second train hit it.

Several train cars are on fire and huge plumes of toxic, black smoke can be seen for miles. Several explosions have also been reported. Emergency crews are urging people to stay inside and a code red alert has been sent out to residents in a two mile radius of the accident.

The Casselton Fire Department says a Burlington Northern Santa Fe train is involved. An unknown number of cars derailed, but we're told the train that is derailed was pulling more than 100 cars, some carrying oil.

The wind is from the northwest, which means the smoke may miss Casselton but people living to the southeast of town are being told to stay inside. The Casselton Fire Department says there is some concern that the derailment is near an ethanol plant.

A Valley News Live Crew is on scene. We will bring you more pictures and more information as soon as we get it.