The climate year for Alaska 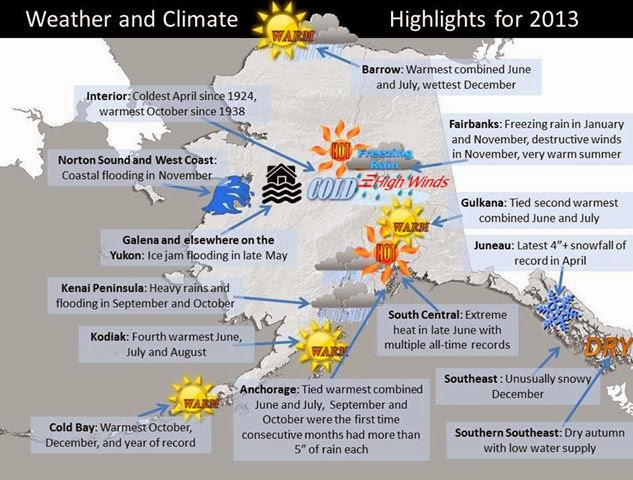 2013 was a remarkable weather and climate year for Alaska, with extremes of heat and cold, severe ice jam and coastal flooding and even drought.

January brought the coldest weather of the year, with a climate station near Delta Junction recording the lowest official temperature of 63° below on January 28th.The spring was very cold over the mainland but this was followed by extremely warm weather during the summer. Juneau saw the latest 4+ inch snowfall in its long weather history on April 26th, and for the first time in more than 40 years the winter snowpack in Anchorage held on into May.

The cold spring was directly responsible for the devastating ice jam flooding that struck Galena in late May. The high of 97°F on June 17th at Amber Lake, southwest of Talkeetna was just three degrees shy of the all-time record for Alaska, and Fairbanks had 36 days with highs of 80°F or higher, by far the most ever in one summer.

The summer was especially dry in the southeast Interior, resulting in a poor hay crop. October was extremely mild across the state, in some places the warmest of record, and in southern Southeast was also unusually dry. November brought damaging coastal flooding to some western coastal communities and significant freezing rain to many areas. At Fairbanks this occurred with damaging winds that toppled snow and ice laden trees and knocked out electricity to a third of area customers.
Posted by seemorerocks at 16:29