Iran hacked and controlled US drones


Iran claims it hacked and controlled US drones, shows footage from missions as proof (VIDEO) 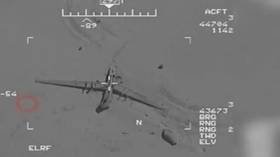 RT,
21 February,2019
A senior Iranian commander claimed his country has managed to take control of several US drones. As proof of Tehran’s claim, it has released some footage, apparently taken from the drones’ cameras.

“Seven to eight drones that had constant flights over Syria and Iraq were brought under our control and their intel was monitored by us and we could gain their first-hand intel,” Iran’s FARS news agency quoted Brigadier General Amir Ali Hajizadeh.
The general heads the air force of the Islamic Revolution Guards Corps, Iran’s powerful quasi-military force.
The agency released a video, which it called “one of the many proofs in support of General Hajizadeh's remarks.”


The three-minute video shows footage apparently taken on several different occasions by aircraft, presumably US drones. Half of it seems to show a single episode, in which an MQ-9 Reaper armed drone crash-lands after its operator apparently lost control. The drone is then shown destroyed on the ground by an airstrike.
Iran is known for its record of interfering with US drone missions over the years, most famously forcing an RQ-170 reconnaissance aircraft to land in 2011, almost intact.
The episode showing the destruction of an MQ-9 Reaper may or may not have happened in Syria in 2016. The US Air Force reported destroying one of its attack drones after it had crash-landed due to an undisclosed cause, which was not enemy fire.
When asked by RT about the Iranian claim, Pentagon spokeswoman Commander Rebecca Rebarich, said: “We are aware of the report and we have nothing else to add.”
Posted by seemorerocks at 19:14