The UK is experiencing its warmest February day on record, with the Met Office reporting a temperature of 20.6C (69.08F) at Trawsgoed, Ceredigion. It is the first time a temperature of over 20C has been recorded in winter.


Parts of Britain exceed temperatures in Malibu, Athens and Crete 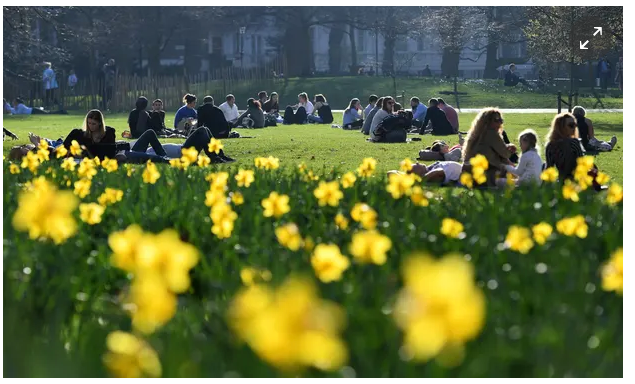 The highest ever winter temperature seen in the UK has been recorded, beating the previous all-time high, set only yesterday.

A temperature of 21.2C was recorded at Kew Gardens in southwest London, beating the 20.6C measured at Trawsgoed, near Aberystwyth, on Monday.

Met Office spokesman Grahame Madge told The Independent: “To see temperatures of over 20C on a winter’s day is exceptional. The previous record was 19.7C and that’s stood since 1998. It is a rare event to see temperatures this high in February.

He added: “A lot of different variables have all aligned to give us these high temperatures.”

But by Thursday the high pressure system bringing warm air up from Europe is expected to give way to see a “potentially very strong” weather system move in from the Atlantic, bringing rain, high winds and a fall in temperatures.

Nonetheless, Mr Madge said the current high temperatures are considered “an extreme weather event”, and added: “The background rate of warming may have just nudged it up a little bit.

“February is meteorologically a winter month, and we are seeing the highest temperatures for winter ever recorded in the UK.”

In terms of average temperatures the month is “within striking distance” of becoming the warmest February since records began in 1910.

Meanwhile, 27 councils across the country have declared a “climate emergency” in an effort to force authorities to act against climate change.

Though scientists warn against conflating specific weather events with climate change, there is wide recognition extreme weather becomes more likely as the baseline for average temperatures has risen.

It is thought the impact of the hot weather in winter will hit animals hardest. Hibernating mammals which emerge too early may struggle to find food and