Tommy Robinson's documentary, exposing BBC Panorama, has yet to appear online but has been shown on a giant screen ourside BBC HQ in Manchester.

Here is a preview.


You may be able to pick up something here.

RT,
23 February, 2019
Thousands of Tommy Robinson supporters gathered outside the BBC’s headquarters in Salford to protest against an upcoming Panorama investigation into the English anti-immigration activist.
Crowds of Robinson supporters waved England, Wales, Scotland and UK flags as they gathered for the demonstration in Media City, Salford. Several attendees wore hi-vis waistcoats, some of which were emblazoned with slogans in support of Robinson.
A big screen was erected at the site where Robinson’s film ‘Panodrama’ was shown. Addressing the crowd, Robinson said that it is “essential” that the movement becomes politicized.
“It has to be politicized. The politicians will not care, none of them will care, until they start seeing us take their seats,” he said.
The demonstration was attended by UKIP MEP Gerard Batten, who called for the BBC’s licence fee to be scrapped.
On the fringes of the gathering, anti-fascist demonstrators held a counter-protest against the event. The demonstrators held placards with slogans condemning racism and accusing Robinson of being a fascist.
Several restaurants in the area were closed as the two gatherings took place and a heavy police presence was visible. 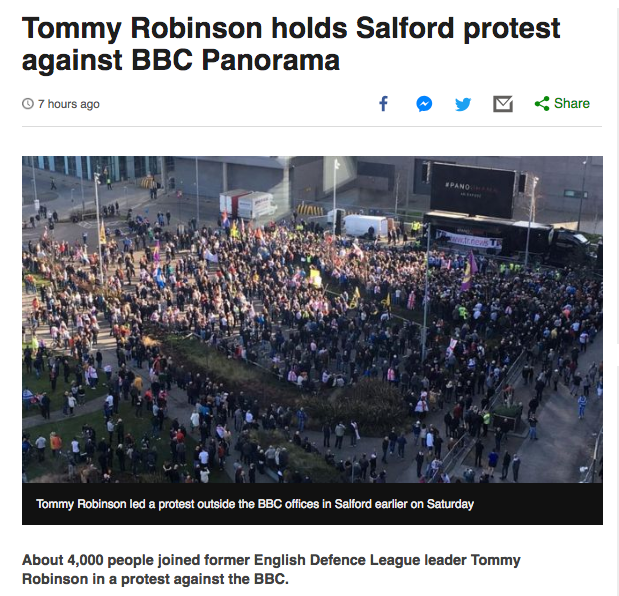