Trump-Kim talks break down in Vietnam

'Sometimes you have to walk', says Donald Trump 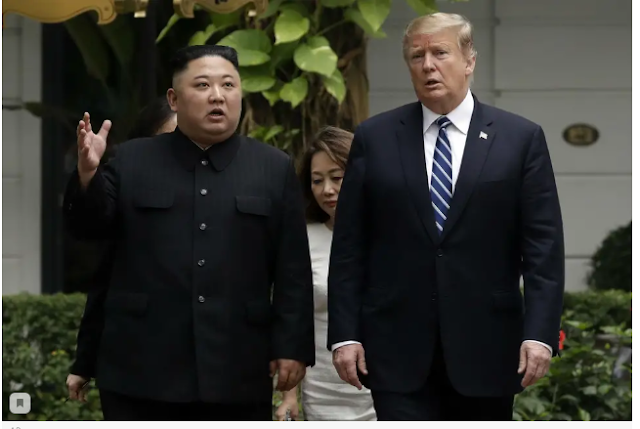 Hopes of a swift breakthrough between North Korea and the US on denuclearisation have been dashed, as talks between Donald Trump and Kim Jong-un broke up early and the White House said no deal had been reached.

Just hours after Mr Kim had smiled for the cameras and instead he “would not be there” if his county were not prepared to scrap its nuclear arsenal, word broke that talks were ending hours early. There was various speculation as to what had caused the discussions, but no official word from either side.

“The two leaders discussed various ways to advance denuclearisation and economic driven concepts,” said White House press secretary Sarah Huckabee Sanders. “No agreement was reached at this time, but their respective teams look forward to meeting in the future.”

As Ms Sanders made her announcement and Mr Trump prepared to hold a press conference to explain what had happened, the motorcades of the two leaders sped away from the Hotel Metropole where the two sides had been meeting
The news came as a shock, especially given the positive body language between the two men and the positive statements from the 35-year-old North Korean leader. Asked if he was ready to denuclearise his country, he said: “If I'm not willing to do that I won't be here right now.”

Mr Kim also said he was keen for the US to open a liaison office in the North, something Mr Trump also backed.

Earlier, in what is believed to have been his first response to a question from a foreign reporter, Mr Kim was asked if he was hopeful of doing a deal with the US. “It’s too early to say. I would not say I’m pessimistic,” he said.

For his part, Mr Trump sought to again temper any expectations of any substantial or rapid agreement between the two countries.

Ahead of the meeting, analysts warned not to expect any major breakthrough, suggesting that persuading North Korea to give up its nuclear arsenal would likely take years and require a number of commitments and assurances from from the US and the international. The experience of Saddam Hussein, who had long given up his nation’s nuclear arsenal and Muammar Gaddafi, who voluntarily gave up Libya, might suggest North Korea’s leverage comes by holding onto its weapons.

Trump reveals low ambitions for North Korea summit but gushes over Kim
Experts said Mr Kim would want to see an easing of sanctions before he country went as far as to shut down a reactor or something as concrete.

For his part, Mr Trump, desperate for a victory overseas as headlines back home are dominated by harmful allegations leveled by his former lawyer Michael Cohen, was oddly temperate.

We’ll tell you what’s true. You can form your own view.