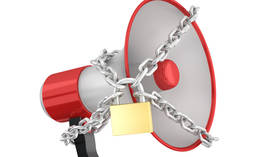 Facebook blocking several pages operated by Maffick Media is nothing short of outright censorship, the company’s CEO Anissa Naouai said, after a US-funded think tank pointed them out to CNN for a ‘hit-piece’.
The actions of the social media giant, which suspended the accounts of In the Now, Soapbox, Back Then and Waste-Ed last Friday without providing any explanation or even contacting the company that ran the pages, is nothing but a simple attempt to get rid of dissenting voices critical of Washington’s policies, Naouai told RT.

It is blatant censorship. What else can you call it?

The ban came literally out of the blue even though Maffick did not violate any existing Facebook regulations.
“There is no rule that you have to post anything about your funding or personal funding. No one does it, not any of the US-sponsored outlets,”
Naouai said. However, that was apparently the stated reason for the blocking as a Facebook spokesperson said the social media giant wanted the pages to become more transparent by disclosing their funding and “Russian affiliations.”

Facebook never contacted Maffick Media directly, though. In fact, it did not even answer the company’s emails and stayed conspicuously silent about the ways that would allow the accounts to be reinstated. “We have not heard a word from Facebook and it has been over three days now,” Naouai said.

The whole situation makes one think that the suspension is in fact connected to the pages’ popularity as well as their critical stance towards US policies, the Maffick CEO said.
“We have hosts that talk about things that are not allowed to talk about on other networks like CNN,” she explained.

“If a video that says that gets hundreds of thousands of views on a page that has millions of views, people [in Washington] start to notice that and they get upset. I believe that is why we were targeted: because of our success and because of, as CNN said, high quality of our videos,” Naouai added.


The Maffick CEO also assumed that a recent piece on the US-sponsored coup attempt in Venezuela might have become a trigger for this drastic measure taken by Facebook. “There is a very … divisive and obnoxious policy taking place right now against Venezuela,” she said, “we do not know if this was the segment that triggered [the suspension] but the timing is convenient.”


“When someone calls out what is happening in Venezuela as a blatant coup it ruffles the feathers of think tanks that spent millions if not billions of dollars to persuade [the audience otherwise] and lobby their interests.”

Some details of this whole case may indeed seem odd. Just about an hour after the pages were blocked, CNN published a report on the issue as if they broke the news. “CNN knew that we were going to be blocked before we did,” Naouai said, explaining that, when she found out her company’s pages were suspended, CNN had already published its piece.
Weeks before the blocking, CNN sought to interview some freelancers working with Maffick in an apparent attempt to “dig up some dirt,” Rania Khalek, the American host of Soapbox – one of the video shows Maffick ran on Facebook – recalled.
When the company’s leadership “got wind of it” and offered CNN an interview, it all ended up with a 45-minute “interrogation” loaded with “unethical” questions that “almost any other media organization would even think to answer.”

It felt like a police interrogation: very invasive questions about Maffick and our editorial policies. It was clear that they were doing a hit-piece.


“A CNN journalist repeatedly asked me about my political viewpoints. He was in complete disbelief that I have editorial control over my scripts. He could not understand how it was possible,”


Khalek, who was one of those, who gave the interview to CNN, said.


Maffick Media assumed that CNN might in fact pressure Facebook into blocking the accounts.
“It is a very competitive market existing in a very political atmosphere that is toxic right now in the US, Naouai said.

CNN itself admits in its piece that it did not just stumble upon the Facebook pages in question independently. Instead, this issue was brought to its attention by the Alliance for Securing Democracy – a part of the German Marshall Fund. This fund is a think tank, which is financed by the US and German governments and has such people as Michael Morell, the former CIA deputy head, and Jacob Sullivan, former Vice President Joe Biden's top security aide, on its advisory board.


Now, CNN, which stepped on a slippery slope by scrutinizing other media outlets’ funding, had to go to some extraordinary lengths to persuade its audience that the Alliance for Securing Democracy “does not receive any funding” from the German Marshall Fund, while still being a part of it at the same time. However, all these facts just added a new layer to the story.

“You have this US-funded think tank prompting CNN to pressure Facebook to ban our pages. That is an act of censorship,” Khalek said. She thinks the whole scheme was used to circumvent the First Amendment banning the US authorities from directly censoring free speech. “So, they use a middleman to pressure private companies to censor us,”she added, calling it a “legal loophole.”

‘Beginning of an end’

Regardless of who is really behind the ploy, Facebook banning some media pages without any explanation sets a tremendously dangerous precedent, Maffick Media believes.

“We had a verified page, which had billions of views, just disappear from online without any kind of comment, any kind of requirement, without breaking any rules. That is unprecedented,” Naouai said.


‘Political censorship’: Sputnik slams Facebook as it removes 350+ pages for ‘inauthentic behavior’
“You have Facebook dictating what people can and cannot see and judging what is good content and bad content. And it is all based on the accusations and criticism coming from a government-funded outlet. If Facebook does it to us, it can do it to anyone,” Khalek warned.


This is because of the political content that challenges the US wars. It is absolutely an act of censorship.

The US establishment apparently seeks to suppress the outlets that “offer a platform to alternative voices that can speak out against US wars and the corporate control over our government in a way that you just do not hear in our corporate media,” the Soapbox host believes.

However, if the social media giant and the likes of it will just continue to randomly block media resources while having “no grounds” to do so, it could create very serious problems for society, Naouai believes.

That would be the beginning of an end of free speech


See one of the latest productions from In the Now
Posted by seemorerocks at 15:17