Ice berg to calve off Antarctica

Once a rapidly spreading rift intersects with another fissure, an iceberg of at least 660sq miles is set to be loosened, Nasa says 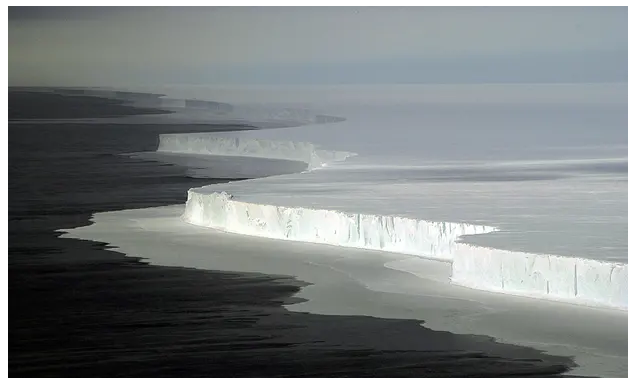 An iceberg roughly twice the size of New York City is set to break away from an Antarctic ice shelf as a result of a rapidly spreading rift that is being monitored by Nasa.

A crack along part of the Brunt ice shelf in Antarctica first appeared in October 2016, according to the National Aeronautics and Space Administration (Nasa).

The crack is spreading to the east. This rift, known as a Halloween crack, is set to intersect with another fissure that was apparently stable for the past 35 years but is now accelerating north at a rate of around 2.5 miles a year.

Once these two rifts meet, which could happen within weeks, an iceberg of at least 660sq miles is set to be loosened.

This process, also known as calving, occurs naturally with ice shelves but “recent changes are unfamiliar in this area” and could lead to the destabilization of the Brunt ice shelf, Nasa warned.

“The likely future loss of the ice on the other side of the Halloween Crack suggests that more instability is possible,” said Chris Shuman, a glaciologist with Nasa and the University of Maryland Baltimore County.

While the anticipated iceberg is large by most measures, it is dwarfed by other recent Antarctic breakaways. In July 2017, one of the largest ever icebergs calved from the Larsen C ice shelf. At 2,200sq miles it was nearly twice the size of the US state of Delaware.

The long-term future of Antarctic ice shelves will have a major influence on sea level rise around the world. A report released by US and UK scientists last year stated that ice in Antarctica is melting at a record-breaking rate, posing a major threat to coastal cities.

The study found that melting of the ice sheet has accelerated threefold in the last five years. Unless drastic action is taken to reduce greenhouse gas emissions and limit global warming, scientists estimate that Antarctica’s melting ice should add more than 25cm to total global sea level rise by 2070. 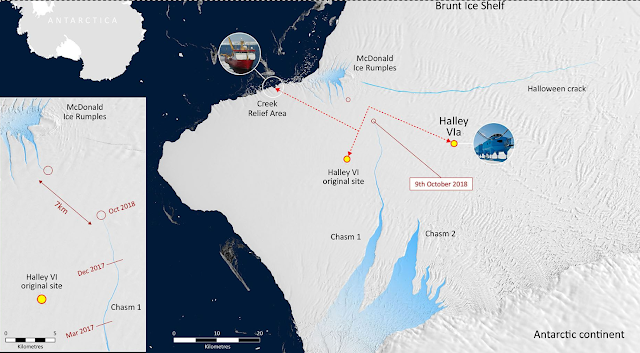 
From Wikipedia, the free encyclopedia
Jump to navigationJump to search

View of Brunt Ice Shelf from the maiden flight of Operation IceBridge's Antarctica 2011 campaign with NASA's DC-8
The Brunt Ice Shelf borders the Antarctic coast of Coats Land between Dawson-Lambton Glacier and Stancomb-Wills Glacier Tongue. It was named by the UK Antarctic Place-names Committee after David Brunt, British meteorologist, Physical Secretary of the Royal Society, 1948–57, who was responsible for the initiation of the Royal Society Expedition to this ice shelf in 1955.
It was the location of the base of the Royal Society Expedition, 1955–59 which was taken over as the British Halley Research Station.
The Brunt Icefalls (75°55′S 25°0′W) extend along Caird Coast for about 80 kilometres (50 mi), where the steep ice-covered coast descends to Brunt Ice Shelf. The icefalls were discovered November 5, 1967, in the course of a United States Navy Squadron VXE-6 flight over the coast in LC-130 aircraft, and was plotted by the United States Geological Survey from air photos obtained at that time. It was named by the Advisory Committee on Antarctic Names in association with the Brunt Ice Shelf.

Refuge Corrientes 75°34′00″S 26°36′00″W is an Antarctic refuge located on the Brunt Ice Shelf, in the Caird Coast of the Weddell Sea, in the eastern part of the Coats Land. The refuge, administered by the Argentine Army, was inaugurated on January 10, 1961 and depends on the Belgrano II Base; it is located close to the Halley Research Station.[1]
https://en.wikipedia.org/wiki/Brunt_Ice_Shelf
Posted by seemorerocks at 18:45