The map below shows that you almost have to travel to Fiordland to find an area that is NOT affected by drought.


A front and a warm air mass will push onto the lower South Island bringing heavy falls for the next two days. NIWA forecaster Ben Noll said the category two cyclone was making its way through the Pacific but might not bring immediate relief from the dry weather even if it reaches New Zealand.

At this stage, he said rain was expected for the Tasman region later this week.

"While rain is good, heavy rain, a lot of rain in a short period [of time] is not. What can happen is you can get a lot of rain and that will fall on our partched soils," Mr Noll said.

"The soils right now around New Zealand are kind of like concrete, so when that heavy rain falls on the soil it will just run off and that can actually lead to flooding issues," he said.

"But it's likely to produce some rainfall for New Zealand, and specifcally the top of the South Island, probably as we go through Thursday, especially Friday and maybe even Saturday.

"So a couple of days where the rain chances peak, depending on where that storm tracks there could be more signifcant impacts to parts of New Zealand, it remains unclear where that is going to be just yet."

Mr Noll said wind gusts today could reach as high as 50km/h in Tasman, but should ease back tomorrow and Wednesday.

A severe weather warning is in place for Fiordland and the MetService is keeping an eye on Westland south of Fox Glacier, and the Otago Headwaters until Wednesday morning.

The wet front over the South Island will weaken and rain will become confined to Westland by Wednesday evening.

"Warm, moist air from the tropics will move over the upper North Island on Wednesday and produce some showers over parched areas of Northland, especially in eastern areas.

"On Thursday, warm moist air will continue to stream in over the North Island bringing very humid conditions with showers for many areas, which marks the start of wetter weather across much of New Zealand."

The wet weather is expected to spread further on Friday as warm tropical air continues to inundate the North Island with showers.

The frontal feature is likely to cause rain as it moves onto the South Island.

MetService tropical cyclone experts are keeping a close eye on the developments of Tropical Cyclone Oma.

"At this stage there is still some uncertainty across the weather model outputs regarding where Oma will move so there is no definitive answer on its exact path at this point but … we will still see some rain this weekend," Mr Bowe said.

South Westland is the only area with a LOW fire alert 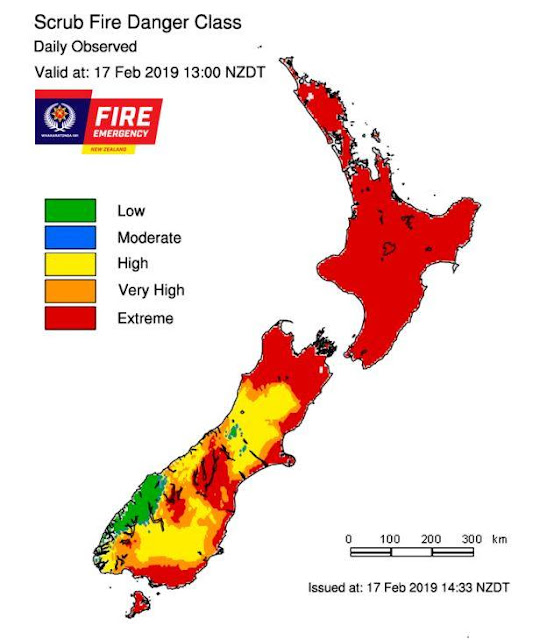 We just wanted to let you know that the roadside (arm and berm) mowing throughout the district will be put on hold until the fire danger reduces.
Stay safe everyone! Thank you for your understanding.

Scott Steven Down here at the moment at Five Mile Bay in Taupo, its hot and dry as hell. We were among 100 motorhomes that had to evacuate the area a couple of days ago due to scrub fire, flared up twice after this photo, its still closed. 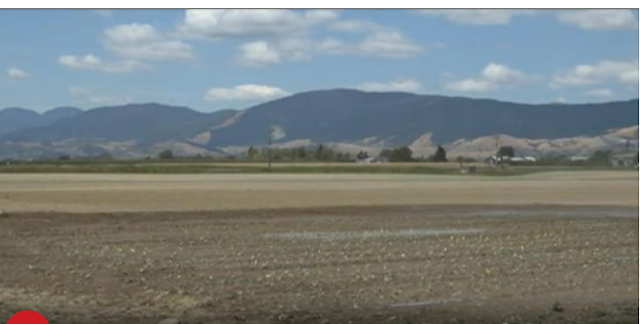 Strict water restrictions have come into force in parts of Tasman today, as the region struggles through one of its driest summers in 18 years.

The district experienced 65 per cent water rationing in 2001, which was described by Tasman Mayor Richard Kempthorne as "really difficult then and challenging".

"But it was in March, so it was at least a month further down than this year. This year, the restriction is a lot earlier," Mr Kempthorne told 1 NEWS.

Waimea Plains apple grower David Easton has turned off his sprinkler system and has switched to a precision drip line.

"We can't waste a drop of water. We've got to use everything as efficiently as we can," Mr Easton said.

"The trees have used up all the water reserves in the ground and they're really just living on the little bit of irrigation we're giving them and so the fruits are not sizing like it would in a normal year."

Most outdoor water use is currently banned in Richmond, Mapua, Ruby Bay, Hope, Brightwater and Wakefield. Businesses in these areas must reduce their water use by 25 per cent.

The Wooden Spoon Café owner Nicky Woodbury says she has always made a point to conserve water, but this year has ramped up efforts.

"Everywhere we can, we catch water and keep it for a purpose. All of our chiller exhausts, our coffee machine - all go onto the garden so that's stopped us using fresh water that we would have quite happily used before," Ms Woodbury said.

Leaving nothing to waste, the cafe is encouraging customers to follow suit.

"We get anywhere between eight and 15 full glasses of beautiful, untouched water left on tables every day. That's always been a bit of an issue, but I guess now it's impacting everyone quite dramatically, it's more of a concern," she said.

A bund has also been built across the lower Waimea River to stop saltwater getting upstream and contaminating water supplies – with an estimated 4.6-metre king tide due at the end of the week.

Without a break in restrictions, the drought could cost Tasman more than $100 million.

With the Tasman fire still burning in the hills, the region is hopeful forecast rain for the weekend will hold true.