Macron's France on the edge

THE leader of the Yellow Vest movement that has wreaked havoc across Europe with violent protests that triggered the collapse of the French economy has declared he has “militiamen ready to bring down the government” following a shock meeting with the Italian coalition. 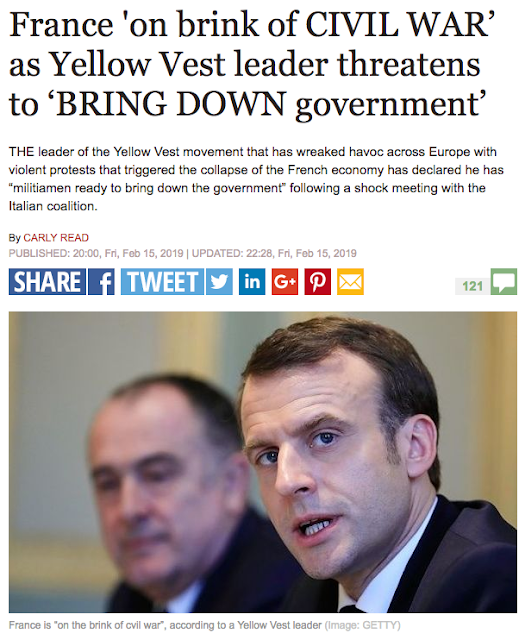 Cristophe Chalencon, one of the leaders of the Yellow Vest revolution, said France is “on the brink of cvil war” before he vowed to fight French President Emmanuel Macron over Paris austerity. In a gathering in Italy with anti-establishment party 5-Star Movement leader Luigi Di Maio and his right-hand man Alessandro Di Battista, the Frenchman raged: “We have people, militiamen, ready to intervene because they also want to bring down the government. Today everything is calm, but we are on the brink of a civil war. “I know that I risk a lot. I can get shot in the head at any moment. But I don’t care. I defend my convictions. “Because if I got shot in the head, the people - Macron would end up on the guillotine.

We have reached such a level of confrontation today that Macron would also fall if I fall. The people would break into the Elysée and destroy everything, him, his wife and all the group.”

When pressed for more details on his military, Mr Chalencon added: “Yes, militiamen. People who have withdrawn from the army and who are against the government.

“Of course I know. It's disturbing. It is disturbing but you do not realise it. Macron is afraid. This is why I tell you that he is afraid.”


TheFrench Government Is Deliberately Increasing the Price of Food
In the name of supporting farmers, the French government is further increasing consumer taxes. The yellow vests hardly have a reason to stop protesting. 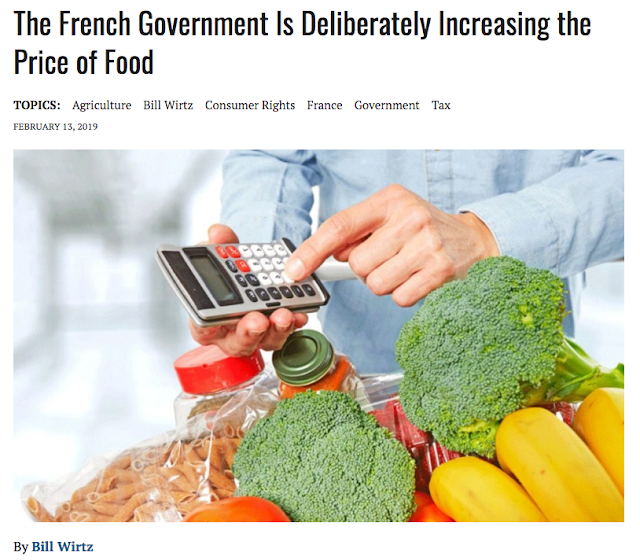 Last October, the French legislature passed the “Loi Égalim,” the long-form description of which reads:

law for the balance of trade relations in the agricultural and food sector and healthy, sustainable, and accessible food for all

. The goal of the bill is essentially to re-establish fairness between food producers and retailers, seen by lawmakers to be using unfair trading practices in order to enrich themselves on the backs of ordinary farmers. The legislative process began in 2017 and has gone through over 3,000 amendments. The bill seeks to achieve the following:

The key issue here is that the government is opening the floodgates to legislative and even administrative price controls on food. The two-year experiment on an increased margin of 10 percent on the net price of food means that the net price of food will increase by 10 percent. The idea that the retailer has to meet the producer’s margin without increasing the retail price is just utopian, which legislators know perfectly well. They may argue for increased margins on the basis of fairness, but the reality is that they are asking consumers to pay more in order to support farmers.

Consumers are right to ask questions about this. After all, the European Union’s Common Agricultural Policy (CAP), of which France is the largest beneficiary, already subsidizes farmers at the expense of taxpayers and to the competitive disadvantage of non-EU producers. If you add other government assistance programs, such as those activated during natural disasters, as well as welfare programs for the individuals in the production business, it becomes readily apparent that consumers are paying for their food multiple times before they even reach the register. And now they’ll be asked to pay 10 percent more on the net price.
The reason why this was chosen as the preferred option is obvious.

The Self-Interest of the Treasury

It is clear that the French state, virtually bankrupt and in search of new tax resources, will recover taxes on margins increased by force through VAT at rates of 5.5, 10, or even 20 percent (the latter rate applying to many products, including alcohol, confectionery, and all sugar-based products, margarines, and vegetable fats). Additional tax revenue here is significant and will be paid by, you guessed it, the consumer.

It is readily apparent that the people making this decision are not those for whom food represents a significant proportion of the family budget, depending on whether you earn €1,200 or €6,000 or more per month (explaining the success of discounter retail stores). Lawmakers have decided, in a purely ideological way and without any proof of the effectiveness of such a measure, to increase product prices at the expense of the population’s poorest.

In this case, one must bear in mind that mass distribution serves here as an outlet for the inability of politicians and the administration to solve the problems of agriculture and farmers. Furthermore, there is no doubt that, as usual, the minister of the economy, in the face of the grumbling that will inevitably arise, will soon summon representatives of mass distribution to lecture them about the unintended consequences that the government’s policy produced.

We’ll probably hear that they have to reduce their margins in order to restore the purchasing power of the French, which has been damaged by excessive taxation. Minister of Agriculture Didier Guillaume has already hinted at that, saying he doesn’t want Michel-Edouard Leclerc (CEO of a large retailer brand in France) to have margins of 40 percent on food products. You get the gist of what is going to happen next.

As soon as the République introduces this new rule, it will be obliged to go even further, continuing the cycle. The unintended consequences (or intended, as I don’t believe lawmakers were intellectually capable of ignoring the real-life consequences) of this public policy necessitate even more intervention in the eyes of advocates of big government. It is the task of a lifetime to get them to stop.
Bill Wirtz is a Young Voices Advocate. His work has been featured in several outlets, including Newsweek, Rare, RealClear, CityAM, Le Monde and Le Figaro. He also works as a Policy Analyst for the Consumer Choice Center.

THE European single currency, the euro, is spreading “economic stagnation” across the EU and is at risk of implosion, two leading economists claimed in a book on the state of the bloc.

THE Italian government has continued its row with Brussels - calling the EU out for its “hypocrisy” - after deputy prime minister Matteo Salvini boasted that the EU faces a change after the European elections in May.