The Nazis in Ukraine supported by US Intelligence


I've been going off Hal Turner in a big way. He has redeemed himself with this report.

"ALL of this chaos in the USA and overseas, is coming from this one, single, source: The Intelligence Community, which is mis-using its unlimited Black Budget to do all these things." 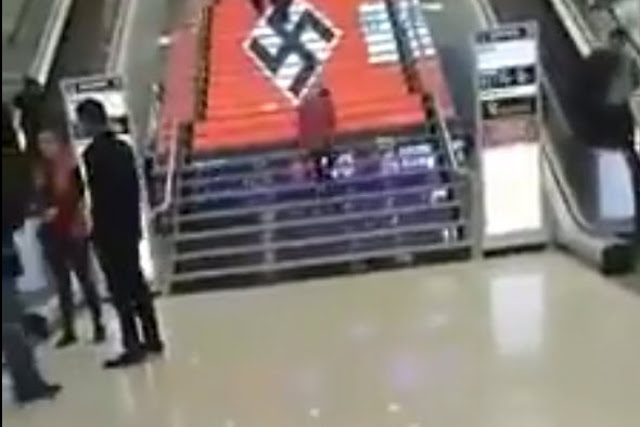 The "Town Gallery" Shopping Mall on Bandera Avenue in Kiev, the capital of Ukraine, decorated the interior of the Mall for Valentine's Day . . . with a SWASTIKA.
During the Obama Presidency, the US backed the overthrow of then-Ukraine-President, Victor Yanukovich, who fled for his life to Moscow. It later came out from Deputy Secretary of State Victoria Nuland, that the US has spent about $5 Billion fomenting social changes in Ukraine. To the keen observer, it was immediately clear that the $5 Billion in "aid" was actually used to foment the forcible, violent, overthrow of the Ukraine Government; and it succeeded in overthrowing it.

Fast forward and we watched as Russia, seeing the changes taking place in Ukraine, moved troops to its base in Crimea to protect its only warm water Naval Base. Shortly afterward, the people of Crimea held a Referendum on LEAVING UKRAINE and re-joining Russia. The referendum passed by an overwhelming majority.

The Russian Duma (Their version of the US Congress) enacted legislation accepting Ukraine back into Russia.

The U.S. and Europe went nuts. They called the move an "annexation" of Crimea and claimed the Referendum Vote to move Crimea back to Russia was "rigged." The U.S. and Europe imposed Sanctions upon Russia ". . . until Crimea is "returned" to Ukraine."

In the meantime, Ukrainians in Luhansk and Donetsk, also voted to leave Ukraine and become independent entities. The government in Kiev would have none of it, and they sent troops to force Luhansk and Donetsk to remain under Kiev's power. Suddenly, scores of "Little Green Men" in unmarked military uniforms, began coming to the aid of Luhansk and Donetsk.

The US and Europe screeched those men were actually Russian Troops. (HT Remark: Of course they were!)

The "Little Green Men" and citizens of Luhansk and Donetsk, fought the Kiev government and its Army, to a standstill. Luhansk and Donetsk are still claiming to be free, but Kiev is still saying they're part of Ukraine. The fight continues.

So what CAUSED Crimea, Luhansk and Donetsk to want to leave Ukraine? Locals in all three places claimed the US-Backed government in Kiev was full of "Nazis."

People in the west laughed-that-off.

Today, it appears the joke is on us because in fact, the shopping mall in Kiev decorating its interior with a Swastika, conclusively PROVES that being a Nazi in Kiev is the present "in" thing. 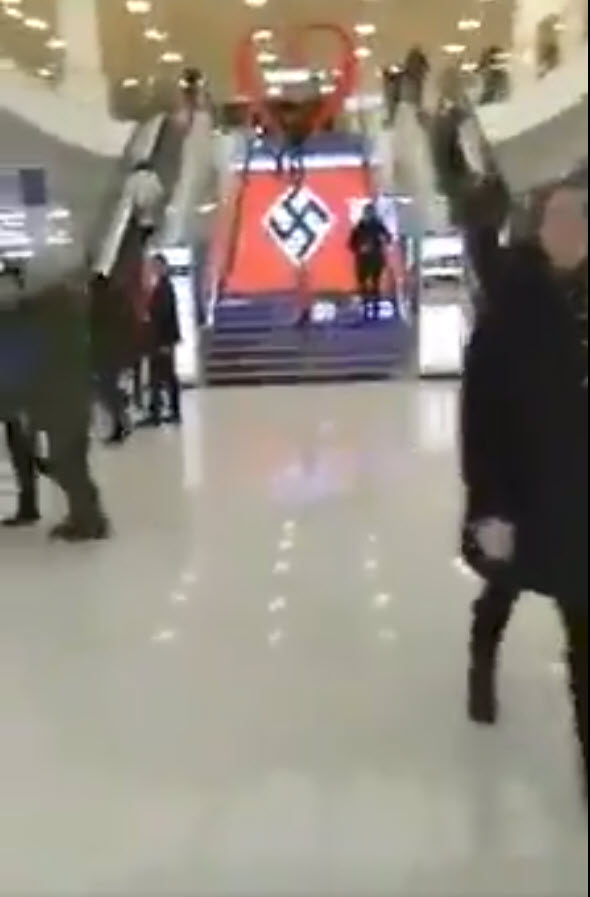 Now stop and think about this for a moment: Actual NAZIS are actually running Ukraine and they are backed by the U.S. and Europe. Both the U.S. and Europe are providing money, weapons and training to the Kiev government, to fight in Luhansk and Donetsk.

Why is the United States Congress funding, training and arming actual NAZIS in Ukraine, and at the same time, telling the American people that Russia is the bad guy?

It was the US, under the Obama Presidency (with Hillary Clinton as Secretary of State) that funded, armed, and trained "rebels" to begin fighting against the Syrian government, claiming Syrian President Bashar Assad was the bad guy. Thus was born, ISIS. The Islamic States of Iraq and Syria.

Those "Rebels" with nice-sounding names like "Free Syrian Army" and "Syria Defense Force" among others, were all connected directly with ISIS. They attacked, pillaged, stole, burned, and killed.

These Rebels/ISIS were so well armed, so well trained and so well funded, the Syrian government was actually falling . . . until Syria asked Russia for help.

Russia came in and began defending Syria . . . and destroying ISIS and the "Rebels."

Here we are, a few years later, the US is leaving Syria, Europe is fuming that Assad is still president, and now scores of arms caches are being uncovered from former ISIS/Rebel-held areas, showing US-made weapons, ammunition, rockets, and more, were supplied to the terrorists destroying Syria. They were supplied by the U.S. and NATO (Europe). Here's proof: 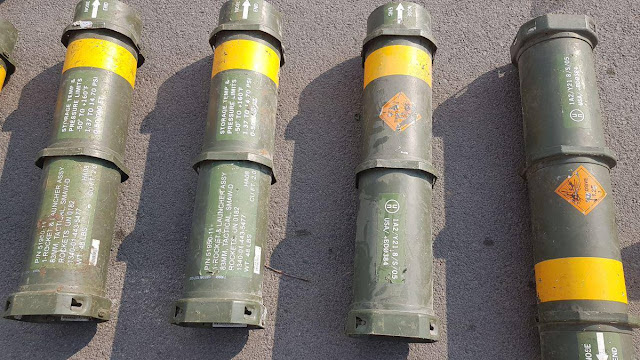 Above: U.S. Made Bunker Penetrating Rockets seized in Syria from ISIS/Rebels 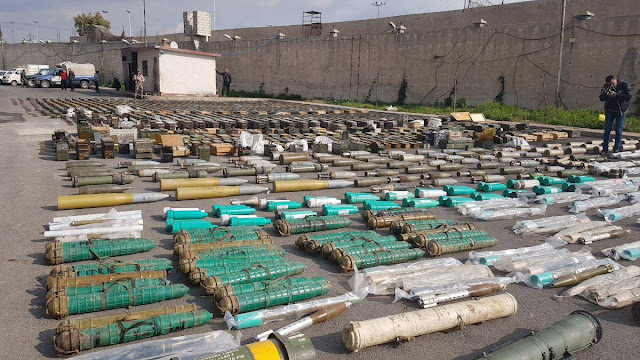 Above: Huge supplies of NATO-Manufactured Weapons seized from Rebels/ISIS inside Syria.


WOW! That looks like a LOT of weapons. It's not. Want to see "a lot?" Look at the two minute video below from Syrian Arab News Agency (SANA):

ALL OF THE WEAPONS ABOVE CAME TO SYRIA FROM THE U.S.A., THE U.K., FRANCE AND OTHER NATO MEMBER COUNTRIES.   ALL OF THEM!

Why were we in the US backing the bad guys of ISIS/Rebels in Syria, while Russia backed the good guys? And why again, at the exact same time, was our US government telling us that Russia was the bad guy?

The Intelligence Community (IC) Is Doing This - ALL OF IT!

In conclusion, the Intelligence Community of the United States and Intelligence networks in NATO, backed NAZIS in Ukraine and ISIS in Syria, while LYING to the American (and European) people that we were supposedly backing freedom fighters and the good guys.

These Intelligence Community entities are - to this very moment - STILL LYING to the President of the United States about what they are really doing in Syria and in Ukraine.

In short, what the Intelligence Community has at its core right now, is a completely Rogue element, fomenting chaos globally, and using an almost unlimited "Black" budget to do so, while LYING to the very government and people who make their existence possible.

And lest you think this Rogue element is only running amuck overseas, I can tell you it is the exact same Rogue Element which is funding ANTIFA and Socialist Democrats here in the USA, to create chaos and foment political unrest, against President Trump.
It is this same Rogue Element that is paying off Journalists, Reporters, and TV Commentators, to shit-stir as often as possible in the mass media.

ALL of this chaos in the USA and overseas, is coming from this one, single, source: The Intelligence Community, which is mis-using its unlimited Black Budget to do all these things.

It is time to put and end to these Intelligence Community Rogues. It is time to stop them DEAD. They are sick, degenerate, murderers who operate their OWN agenda, for their OWN purposes, who think no one knows what they've been up to and still think no one can stop them.
Lest you think any of this is inaccurate or photoshopped or taken out of context, here is actual video from inside the Town Gallery Mall in Kiev, Ukraine, showing the colors of their US-Backed, political controllers: