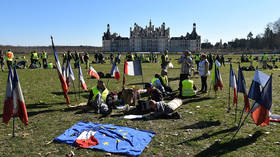 The Yellow Vest movement staged anti-government protests for the 15th week in a row on Saturday, with thousands participating across France. Some minor clashes were reported during the generally peaceful day of action.
The French Interior Ministry estimates that a total of 41,500 people marched in streets around the country, a dwindling number compared to almost 300,000 at the peak of the movement’s strength.
French authorities arrested 13 protesters in Clermont-Ferrand, with the police reporting the seizure of baseball bats, crowbars and other weapons.
A further six people were taken into custody in the capital, Paris, while in Nantes police deployed tear gas against the demonstrators.
There were also chaotic scenes in Montpellier where riot control officers drenched protesters with a water cannon and fired tear gas into the crowd.
Most of the protest events on Saturday were rallies, but one group instead gathered for a picnic at the Chambord chateau, a popular tourist attraction in the Centre-Val de Loire region in central France. The castle had been used by President Emmanuel Macron to celebrate his 40th birthday in 2017.
A more combative protest took place in Toulouse, where environmental activists disrupted work at an Amazon depot.
The large scale rallies were sparked last November in reaction to proposed fuel hikes, which were subsequently shelved. They have since morphed into a rejection of Macron’s government. The Yellow Vest protesters are planning to keep holding demonstrations until March 9, when they plan to stage a “decisive protest” against Macron.