A wild weekend for New Zealand

Showers are expected to pepper Auckland commuters during rush hour traffic while those further north are in for a soaking.
While Cyclone Oma is not heading to New Zealand it has contributed to the warm air moving over the country from the tropics.
Electricity companies have put emergency crews on standby today, braced for a possible deluge, as heavy rain warnings are in place for Northland and the Tararua Range.
Northland is being warned of up to 100mm of rain over night, while power companies have put crews across the North Island on stand-by.
Companies including Northpower, WEL Networks, The Lines Company, Counties Power, TOP Energy and Vector are all preparing for a busy weekend ahead with wet and windy weather having the potential to bring down power lines and disrupt supply.
People are being asked to secure or put away garden furniture and trampolines, as well as any loose material around the garden such as tarpaulines, as they all have the potential to be hazardous.
"During a power outage, crews will work as quickly as they can to restore power, but please remember that the safety of the public and lines mechanics is of primary importance at all times," Vector said in a statement.
"And most importantly, please, always treat downed lines as live and stay well clear."
MetService Communications Meteorologist Lisa Murray said this was the first rain event like it for the year and warned the drier ground could create some water run off.
"It's been quite a dry year so far."

Around 9mm of rain is predicted to fall in Auckland in the two hours from 4pm, according to MetService, which has a heavy rain watch in place for Auckland north of Orewa, Mt Taranaki and the eastern Bay of Plenty.
Murray said it would be "showers here and there".
MetService warned the heavy falls could cause streams and rivers to rise rapidly, and surface flooding and slips are also possible. Driving conditions may also be hazardous.
Motorists have been warned to take extra care this afternoon, with the NZ Transport Agency (NZTA) urging people to "slow down and remember to keep a safe following distance".
The Earthquake Commission was prepared to assist homeowners with lodging an EQC claim if the impact is as severe as some are forecasting.
Deputy chief executive operations, Paul Jepson, said while it remains unclear exactly which parts of the country could be affected by the bad weather, homeowners should contact EQC and lodge a claim if their property suffers damage.
"Last year a number of storm events, including ex-cyclones Fehi and Gita, caused flooding and landslip damage across different parts of the country, and it is possible that Oma could do the same if it makes landfall here."
Jepson said that the safety and welfare of family, friends and neighbours comes first in every natural hazard event.
"Our advice is keep a check on the weather forecasts and make sure your home is secured and weather tight to reduce the risk of damage occurring.
"It is important that New Zealanders are prepared, if however any homeowners suffer damage to their property they should contact EQC as soon as possible."
A new low is already beginning to form, which is set to continue the wet and windy weather through to Monday.
"What we have is some very, very moist warm air sinking southward from the tropics later on today and into tomorrow," MetService forecaster Mark Todd said this morning.
The Upper North Island, from northern Auckland up to Northland was at greatest risk of heavy rainfall.
"There is a significant weather change coming for many parts of the country - there are a couple of cold fronts coming in from the south, bringing in significantly colder air," Todd said.
"We are going to see a drop in temperature in many areas. There are also going to be gale-force southerly winds in many places and risk of heavy falls in eastern areas of the North Island."
The heavy rain, coupled with the dry, parched landscape, has prompted the National Institute of Water and Atmospheric Research (Niwa) to warn of flooding caused by excessive runoff.
WeatherWatch's Philip Duncan said a new low forming to the east of the country will bring a wet and windy weekend for many.
"Parts of Auckland are likely to experience strong winds of up to 50km/h, while parts of the South Island and central New Zealand could see gusts more than double that," he said.
"We are no longer staring down the barrel of a cyclone, but this new weather system could still cause some mischief this weekend, so we're urging people to take the appropriate precautions."
However, Duncan said high pressure will return to New Zealand next week.
"Our forecast, generally speaking, is for drier than average weather to continue next week once the southerly has gone by the end of Monday as the following high pressure system looks very solid."
Meanwhile, Cyclone Oma looks set to remain in the Coral Sea for around a week, but will likely lose its cyclone status and become a tropical depression as it slowly weakens.
"It still looks likely to unravel over Queensland sometime late next week," Duncan said.
Heavy rain, winds and storm surges from the tropical cyclone uprooted trees, destroyed homes and food crops in Toba and Sanma provinces in Vanuatu earlier this week. The main damage on all islands was coastal destruction, the Vanuatu Daily Post reported.
Widespread damage was also reported in New Caledonia after power was knocked out for thousands of homes, while trees were felled and roads flooded. 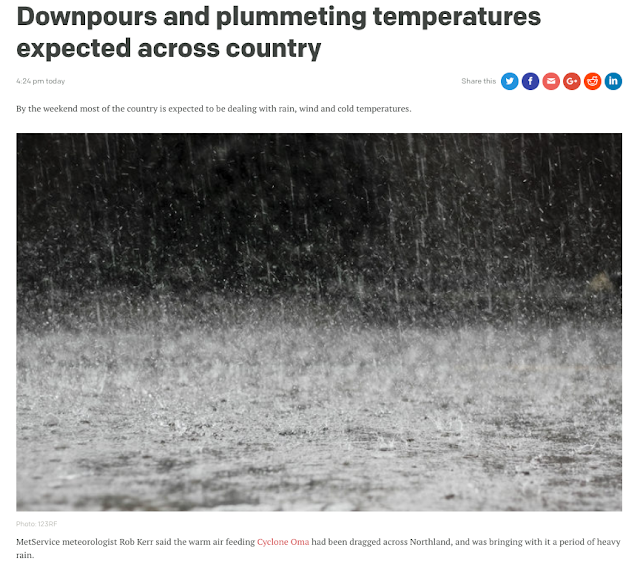