RT,
23 February, 2018
Venezuela has severed relations with its neighbor Colombia and has expelled all diplomats from its embassy, President Nicolas Maduro has declared, during a rally in Caracas.
Maduro had earlier closed the border with Colombia in the run-up to Saturday’s attempts by the opposition to deliver trucks of ‘humanitarian aid’ from Colombia, in defiance of Caracas. A part of the border where a forced crossing might take place has been the scene of a tense confrontation between opposition activists and security forces all day.
Addressing a crowd of thousands of supporters, Maduro condemned his Colombian counterpart Ivan Duque for meddling in Venezuela’s internal affairs, calling him a “devil in the flesh”. 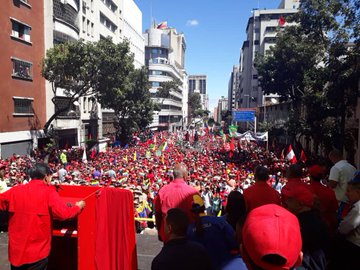 Patience is exhausted, I can't bear it anymore, we can't keep putting
up with Colombian territory being used for attacks against Venezuela.
For that reason, I have decided to break all political and diplomatic
relations with Colombia's fascist government,” Maduro said, adding
that the staff at the Colombian embassy has 24 hours to leave his
country.

The Venezuelan government sees the attempted delivery as a publicity
stunt meant to bolster the opposition and to potentially trigger a major
uprising in the country. There are also fears that the convoy may be
used to smuggle weapons to arm the opposition.
Posted by seemorerocks at 15:39