Three Venezuelans, who rammed a barrier blocking a border bridge in Venezuela before defecting to Colombia, seem to have paid little care about the well-being of civilians and injured several people.
The incident occurred on Saturday morning amid a larger confrontation there, over the attempts by Venezuela’s US-backed opposition to force a delivery of ‘humanitarian aid’ into the Latin American country – a move that its government denounced as a PR stunt and possibly a cover to smuggle arms.
Footage of the incident released by AFP shows two armored vehicles speeding towards the camera and a crowd of people running away to avoid being hit. The front vehicle then rams into the metal barrier. In the aftermath several people appear to be hurt, including a young woman covered in blood with an injury on her forehead. 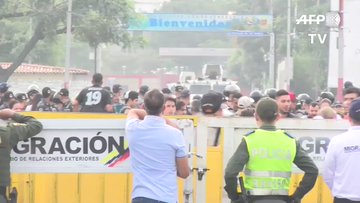 VIDEO: Watch as three Venezuelan troops use their jeep to smash through a security barrier, on the Simon Bolivar bridge, as they desert to neighbouring Colombia

1,139 people are talking about this
Twitter Ads info and privacy
There was much anger and confusion among the people endangered by the reckless driving.

Replying to @BenjaminNorton
This video (warning: violence and blood) shows the aftermath after 3 Colombia-backed Venezuelan guards hijacked 2 armored vehicles and slammed into the security barrier on the bridge.

You can see these coup-mongers injured a young girl, who is bleeding

168 people are talking about this
Twitter Ads info and privacy
Aftermath of the same ramming was earlier shown by TeleSUR. 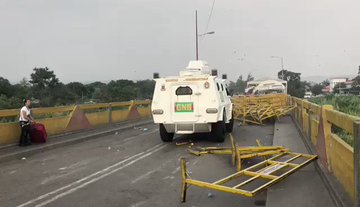 #Breaking: The attackers got out of an armored vehicle and crossed the #border with weapons in their hands. Colombian authorities seemed to endorse this irregular behavior. A Venezuelan border police and a Chilean photographer were injured. #Venezuela #Colombia #HandsOffVenezuela

357 people are talking about this
Twitter Ads info and privacy
Several people were reported injured in the incident, including a Chilean reporter, Nicole Kramm. Who was at the scene to report on the ongoing border tension.
The Venezuelan authorities called the three defectors “terrorists” and said they had hijacked the two armored vehicles of the National Guard for a publicity stunt orchestrated by the opposition. The opposition said the three were guardsmen, who decided to stand with the Venezuelan people. 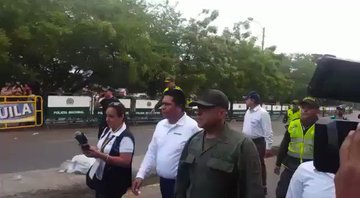 28K people are talking about this Replying to @WCKitchen
Second humanitarian aid truck is now on fire as well. The truck has exploded. #Venezuela 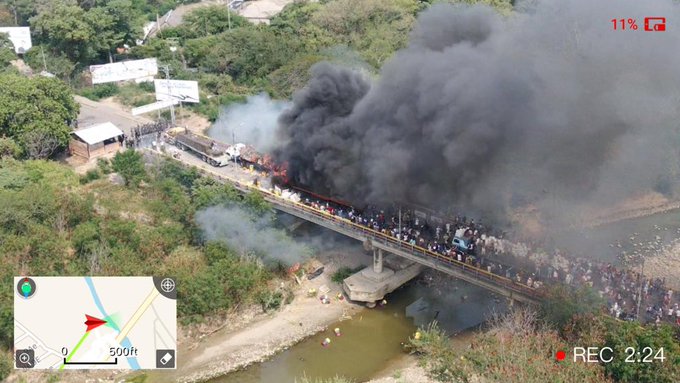 WorldCentralKitchen
✔@WCKitchen
All aid trucks on the Francisco de Paula Santander bridge to Venezuela are now on fire — the cargo was able to be removed from the last truck and taken back across the bridge into Colombia. #Venezuela pic.twitter.com/ivzk2Ai9Db 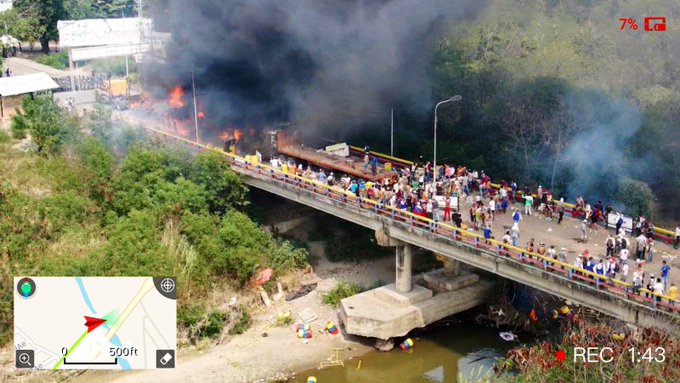 1,812 people are talking about this

They have also burned the aid carried by two trucks.

Aerial picture of what is happening - not mine#23feb #breaking #venezuela 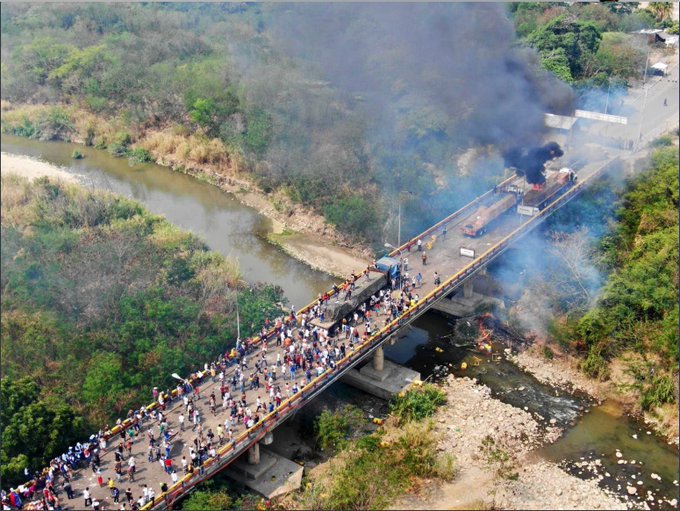 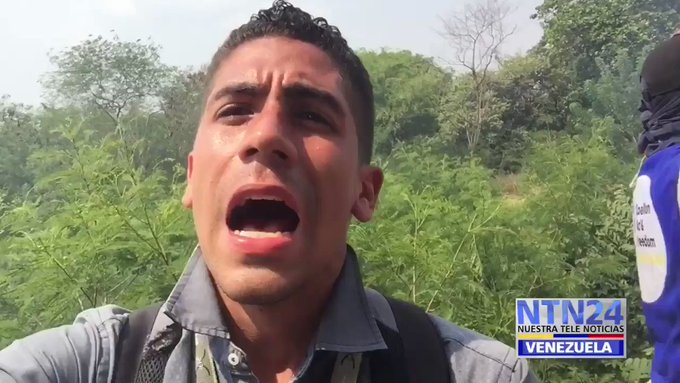 36 people are talking about this 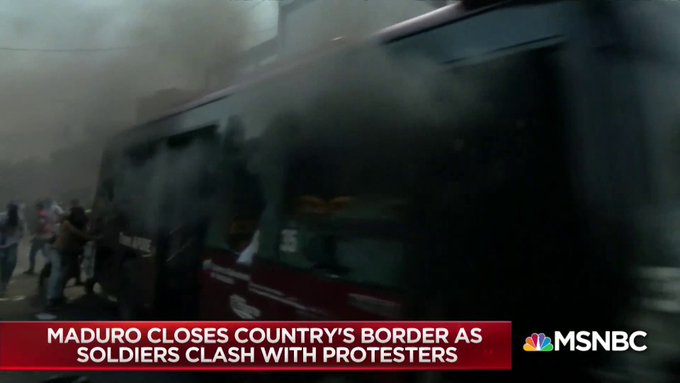 BREAKING: Violence amid protests and clashes at Venezuela's borders, as efforts ramp up to force foreign humanitarian aid into the country, despite the Maduro regime's efforts to keep it out.

978 people are talking about this
Twitter Ads info and privacy
Meanwhile, in Santa Elena de Uairén near the Venezuela-Brazil border, gunfire has erupted. 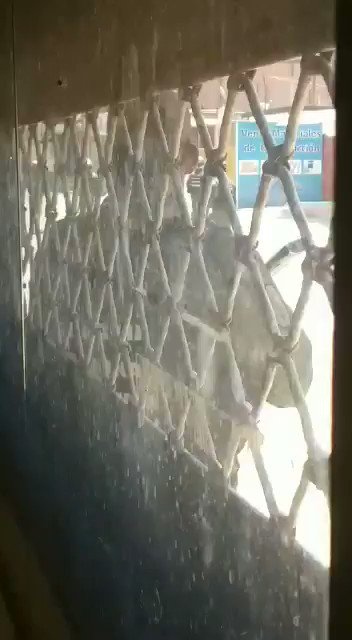 84 people are talking about this
Twitter Ads info and privacy
Imagine the response if Venezuela tried to drive a caravan of “humanitarian aid” across the border in McAllen, Texas, Nogales on the Arizona border, or the crossing in California at Mexicali. It would likely resemble Bush the Elder’s Highway of Death in Kuwait. 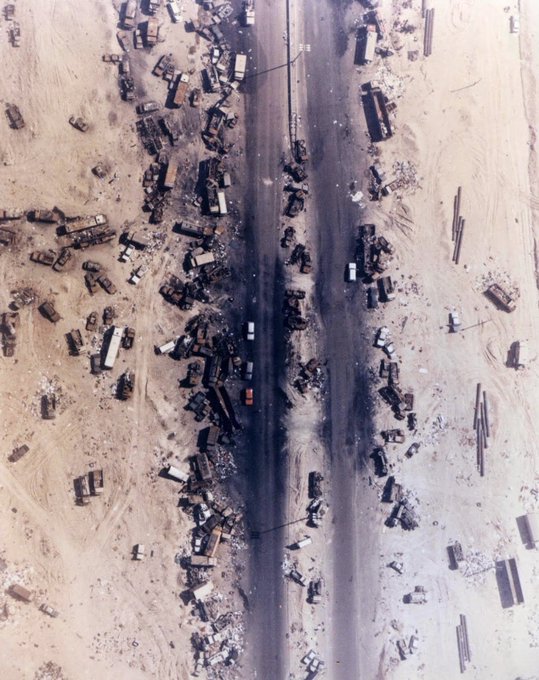 Aerial view of "The Highway of Death" on which Iraqi forces suffered devastating losses at the hands of Coalition Forces as they retreated from Kuwait in February 1991. Between 1,400 and 2,000 vehicles were destroyed or abandoned.

See Antoine Bousquet's other Tweets
Posted by seemorerocks at 15:19