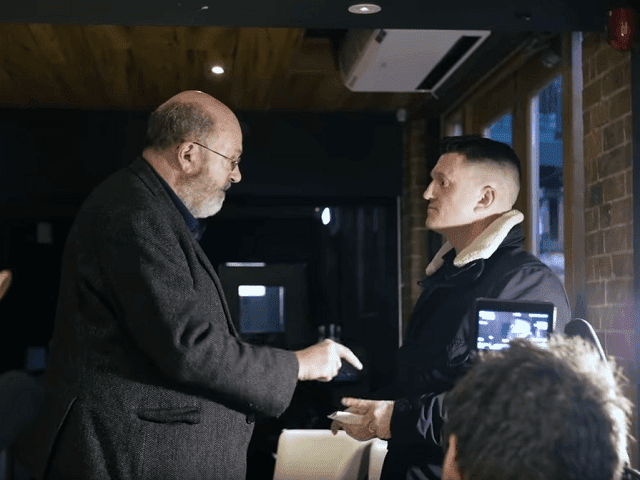 Facebook has banned British citizen journalist and street organiser Tommy Robinson from its platforms, including Instagram, in a move that comes days after he released a new documentary exposing what he claimed to be dishonest practise at establishment media giant BBC.

The social media giant claimed in a statement published Tuesday that Tommy Robinson’s own Facebook page, which had around one million ‘likes’ before deletion, “has repeatedly broken [Facebook community] standards, posting material that uses dehumanizing language and calls for violence targeted at Muslims. He has also behaved in ways that violate our policies around organized hate.”

Did you see the shocking BBC Panorama documentary about the bullying, Soros-funded, far-left, anti-free speech group? No. And you never will.
breitbart.co

Facebook claimed the move “is not a decision we take lightly.”
Responding to the ban, English Defence League founder turned citizen journalist Tommy Robinson told Breitbart London: “…the reasons they’ve given are just complete lies. They’re saying I incited violence and that I openly called for violence against Muslims, that’s just a lie. If that was the case then they could show evidence of messages where I’d said that but I never have.

“This is continued censorship which we all knew was coming but its been done instantly because of my documentary which exposed the establishment working with Hope not Hate, working with the BBC in order to destroy my name to the nation. When I exposed what they were doing they’ve put down the pressure to completely delete me from the internet. This has to show people the levels they’re gonna go to silence any opposition to mass migration and the Islamisation of this nation.”

But the truth cannot be censored!


1,296 people are talking about this
Twitter Ads info and privacy
Robinson’s removal from the platform is only the latest in a series of bans targeting the campaigner in recent years. He was de-platformed by Twitter in May 2018, banned from receiving payments by Paypal in November of that year, and had Youtube videos blockedfrom earning revenue in January 2019.

Mr Robinson told Breitbart London that he would be working on his own mobile app for live streaming after his removal from several social media sites.

It is not clear what actions were taken by Mr Robinson’s social media page in the recent past to cause Facebook’s decision to remove him now, but the move does come just days after he released an exposé documentary claiming to reveal underhanded dealings at British state broadcaster the BBC. In the hour-long film, which Robinson uploaded to his Facebook page, it is alleged the BBC collaborated with far-left activist organisation HOPE Not Hate to create what was apparently called a “Tommy Takedown”.

BBC Panorama's John Sweeney has allegedly been caught referring to working-class men as being like "cannibals from Amazonia" in a leaked undercover video released by Tommy Robinson.
breitbart.com

Robinson’s film debuted at a protest he held in Manchester, England, outside the offices of the BBC where the Panorama documentary series is produced. Thousands are reported to have attended the heavily-policed event.

In the film, top BBC documentary maker John Sweeney can be seen being confronted by Robinson with undercover footage of him making apparently racist and classist statements. It is believed at least some of the claims and counterclaims between Mr Robinson, the BBC, and HOPE Not Hate may yet be contested in court.

Responding to the ban, Tommy Robinson ally and UKIP leader Gerard Batten said the rise of censorship showed the nation was headed towards a “dark place.” He said: “Without any explanation whatsoever, the personal Facebook accounts of key UKIP members and Tommy Robinson have been removed.

“I am sure it is no coincidence that this is happening within 24 hours of the release of the Panodrama documentary.

“I would expect critical media outlets to be shut down in tin-pot dictatorships, not the United Kingdom. If anything, it is a sign that UKIP and other voices are causing a stir on social media which deeply concerns the political establishment.

“I call on Facebook to reinstate all of the accounts as soon as possible and I wish to re-state UKIP’s commitment to freedom of speech and expression. UKIP is the only party interested in genuine free speech and countering the politically correct MSM narrative. We are moving into a dark place in our national life, and if people are concerned, they need to support those who defend their traditional rights and freedoms.”

Far-left group HOPE not Hate (HnH) have been identified in a new research paper on far-left extremist violence alongside Antifa and other violent groups by the Swedish Defence Research Agency (FOI)...
breitbart.com

Censorship: Facebook Just Targeted Another Conservative Conservative author Raheem Kassam woke up Tuesday morning to a message from Facebook saying that his personal page had been “disabled.”
Kassam told The Western Journal, “I woke up this morning and my account was deleted. Not my actual page itself was deleted, but my personal page had been deleted. So, I couldn’t even administer my fan page anymore.” For Kassam, a former editor at Breitbart London and the author of the book, “No Go Zones: How Shariah Law is Coming to a Neighborhood Near You,” it was a brutal blow. He added that this would have been a “disaster” had he not had another administrator who was able to manage his fan page and get the word out that his personal page had been disabled.
Additionally, Facebook offered no explanation to Kassam as to why his account was disabled. The conservative author quickly appealed the ban and then started calling on social media influencers to start tweeting about the ban.
President Donald Trump’s, Donald Trump Jr., was one such influencer. And Kassam appreciated the attention.
The social media giant told the Kassam the account had been removed “in error.” Kassam thinks that the public is due an explanation as to how these types of bans happen. Conservatives have been complaining for years that social media platforms like Facebook and Twitter target the right end of the political spectrum.