A "solution to a non-existant problem"?: How drugs are moved from Mexico into Arizona


All the liberals, right down to Jimmy Dore, maintain Trump is trying to solve a “non-existent problem”

This is from a Mexican source.

They don't appear to be talking about "normal ports of entry"

Whether a huge, expensive wall is going to be a solution. My feeling is that, clumsy and insensitive he may be but Trump is naming what is a real problem. What you do a out CIA drug-running I don’t know.

Any problem that is swept under the carpet becomes almost impossible to fix.

Coincidentally, as I tried to format and upload this my new compuer stopped co-operating with me


By tunnel or by mule: how drugs are moved from Mexico into Arizona 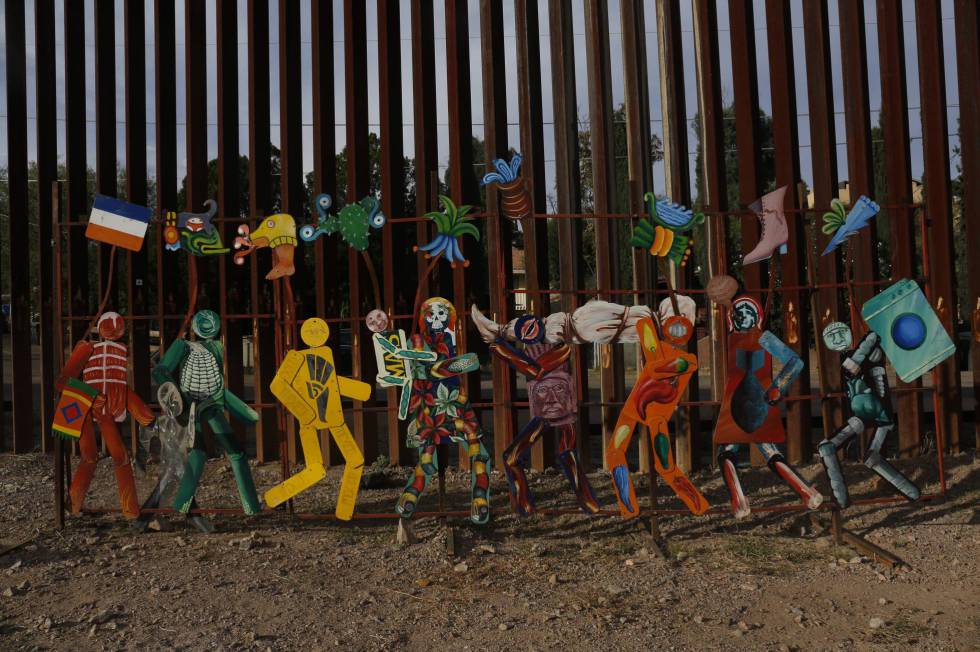 The cartels are continually finding new ways to smuggle drugs
“Sometimes, when I’ve been outside washing clothes, I hear how they shout at them in their language to get down from the wall. When I see someone trying to climb over with a bag [of drugs] I go inside my house to avoid problems,” she says.
Sandra has lived in this slum for 15 years. Before the United States built its wall of rusted metal bars, she says, there was a shorter fence that locals would cut with pliers and slip through to go shopping “on the other side.” Then the fence was replaced with metal sheeting, until in 2007 the current barrier was put up.


“In the 1990s, I used to cross through the hole, as we used to say. There wasn’t all this technology,” Sandra says, pointing at security cameras on the other side.
A few meters down the road, a kindergarten decorated in bright colors stands in sharp contrast to the wall. Vanessa Quijada, the director of the school, says it is normal for young kids to see police activity and men scuttling over the wall. “They know the wall divides us, that it separates one country from the other,” she says. The street where the school is located runs all the way through downtown Nogales where men with backpacks filled with drugs climb up the rectangular bars in front of the stores just a few steps away from the checkpoint. “It’s a very common thing,” one shopkeeper explains. “They climb up like Spider-Man and quickly jump over to the other side.”

The Sinaloa Cartel has strengthened its presence in Arizona
According to municipal authorities, 40% of the population in Nogales, Sonora, is transient. Hundreds of people who have been deported from the United States stay in the town, sometimes indefinitely, most of them picking up jobs in manufacturing, waiting for another opportunity to enter the United States. Nogales was one of the first cities in northern Mexico to attract maquiladoras, or US assembly plants. Father Ricardo Reciado, who is involved in outreach work in troubled communities, says hundreds of young men and women have joined the drug trade as recruits. “They use primary and secondary school students to move drugs, as well as little boys from the slums to serve as informants,” he adds.

The Arizona-Sonora border is one of the biggest entry points for drugs into the United States, and the Tucson border patrol is one of the busiest units, with eight stations covering most of Arizona, from New Mexico to Yuma County. Its agents typically seize around half of the marijuana that enters the country along the 350-kilometer border, says Vicente Paco, the spokesman for the Tucson border patrol.
The gangs operating here not only oversee the drugs trade, but also control the gun and migration routes, Paco says. “Any person who wants to enter the United States illegally has to join organized crime. They have to pay the organizations and if they don’t have money they are used as mules.”
One of the most dangerous areas along the Arizona-Sonora border is the Great Desert of Altar, a UNESCO World Heritage Site, where temperatures can reach 50ºC. Its inhospitableness makes it attractive to the drug traffickers, says the border patrol. A common way to transport drugs is to send the mules in groups of up to 15 to make the 15-day journey through the desert with 20 to 25 kilograms of marijuana strapped to their backs.

The gangs that control the tunnels use look-outs to spot border patrols
The organized crime network is so large it uses people on both sides of the border. Since 2014, more than 80 individuals have been arrested in the hills for spying on law-enforcement agents working at the border. “Before, a lookout who watched our police efforts would enter the country as an illegal immigrant and the only thing we could do was return him to his country,” one agent says. Now, if border patrol finds a campsite on a hill with paramilitary equipment and radios operating on secret frequencies, the state of Arizona will charge the suspect. “They are the eyes of the criminal organizations,” he adds.
A recent US border patrol report said agents seized 1.5 million pounds of marijuana and 4,294 pounds of cocaine in 2015, with Tucson alone accounting for 48.6% of all seizures. Agent Paco says he has seen a rise in the confiscation of methamphetamine, heroin and cocaine.
The cartels are continually diversifying the ways they transport drugs. Authorities have discovered 107 cross-border tunnels in Nogales alone, while each day dozens of men carrying drug shipments climb over the wall. “Nogales is also known as the tunnel capital. Since Sonora is a mining state there is the kind of technology [needed] to build this type of infrastructure,” Paco says. The border patrol has also found catapults, staircases and loading ramps near the border.
Meanwhile, the Sinaloa Cartel has reinforced its presence in Arizona in order to ramp up its shipments of marijuana and heroin, the Drug Enforcement Administration (DEA) says. The organization once led by imprisoned drug bossJoaquín El Chapo Guzmán, who is now fighting extradition to the United States, poses the greatest threat to Arizona’s communities, controlling an estimated 90% of drugs that cross the border. The Sinaloa cartel also controls arms and money-laundering routes.
English version by Dyane Jean-François.